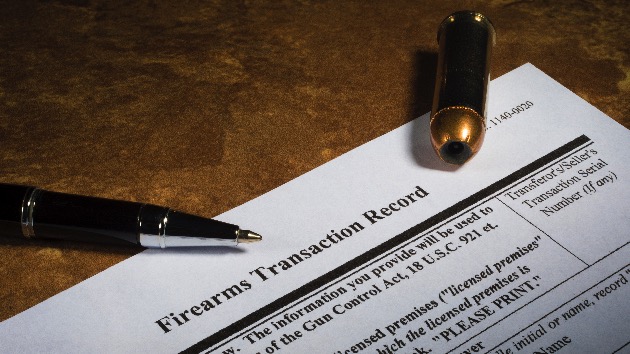 (WASHINGTON) — The House on Thursday passed the Bipartisan Background Checks Act of 2021, a measure that would require universal background checks on all commercial gun sales, part of a new push for gun control after Democrats won control of the Senate.

Some Republicans strongly objected to the expanded checks, one saying they’re “meant to turn law-abiding citizens into criminals.” Despite their criticism, eight Republicans backed the bill, which passed 227-203.

The universal background check legislation was introduced in March by Rep. Mike Thompson, D-Calif., who is chair of the House Gun Violence Prevention Task Force, has three GOP cosponsors.

“The last two years have been a turning point in our longstanding fight to help prevent gun violence and we take another leap forward in helping to save lives. Joined by Democrats and Republicans, we introduce the Bipartisan Background Checks Act of 2021 to help keep guns out of the hands of those who may be a danger to themselves or others,” Thompson said in a statement about the bill.

The bill is the work of the House Gun Violence Prevention Task Force which was created in the wake of the Sandy Hook Elementary School shooting. The legislation was originally introduced and passed by the House in early 2019 but was never considered by the Republican-controlled Senate.

The House is set to consider another gun control measure this week introduced by Rep. Jim Clyburn, D-S.C., which would close the “Charleston loophole,” which allows the sale of a gun if a background check hasn’t been done in three days.

The name was coined after the loophole allowed shooter Dylann Roof to obtain a gun for a massacre in a Charleston church that killed nine people.

“However, he still should not have had the gun and the reason he had the gun is because when he went to purchase it and the three days expired, as the current law allows, they had not been able to verify the information he had given them, and therefore could not complete the background check,” Clyburn said Wednesday during House floor debate on the legislation. “This law would have prevented [Roof] from getting a gun.”

The bills did face ire from Republican House members not in support of expanded background checks. Rep. Lauren Boebert, R-Colo., said in a tweet that “universal background checks on guns are only meant to turn law-abiding citizens into criminals.”

Rep. Thomas Massie, R-Ky., also took issue with Clyburn’s legislation, and during debate on the House floor Wednesday, said it was not fair.

“Is it fair to surround yourself with armed guards, with Capitol Police who have guns, with personnel details, bodyguards and ask the people to pay for it while you make it harder for those same people to protect themselves? I don’t think that’s fair,” Massie said.

After the two bills were introduced, President Joe Biden threw his weight behind the effort, saying in a tweet that he is committed to “passing common-sense gun safety reforms as president.”

Though both bills will likely pass in the House, they will face an embattled passage in the 50-50 split Senate. Though some moderate Democrats and Republicans, like Sens. Joe Manchin, D-W.Va., and Pat Toomey, R-Pa., have put forward background check bills in the past.