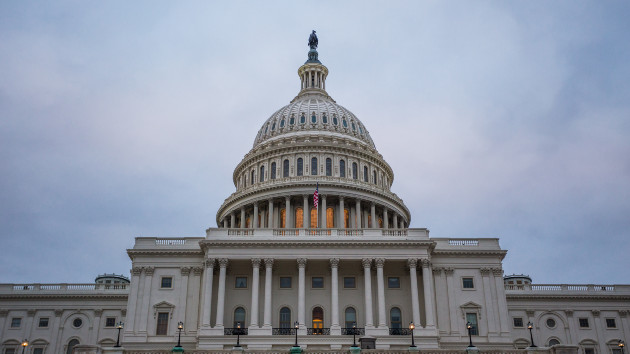 (WASHINGTON) — The House on Thursday approved a bill that would provide millions of veterans with expedited health care and disability payments related to illnesses caused by toxic exposure from burn pits.

Thirty-four Republicans voted with all Democrats to support the bill.

The push to support military veterans plagued with health issues caused by toxic exposure to burn pits got a significant boost during President Joe Biden’s State of the Union address Tuesday — his support coming just before the House was set to vote Thursday.

“I’m calling on Congress: pass a law to make sure veterans devastated by toxic exposures in Iraq and Afghanistan finally get the benefits and comprehensive health care they deserve,” Biden said, calling it part of “a sacred obligation to equip all those we send to war and care for them and their families when they come home.”

Biden lamented the dangers of the toxic smoke from burn pits, which have resulted in enduring health issues for military veterans stationed overseas in Iraq, Afghanistan and Southwest Asia.

Active-duty service members who have been exposed to these toxic chemicals are often plagued with life-threatening diseases and illness.

“And they come home, many of the world’s fittest and best-trained warriors in the world, never the same,” Biden told lawmakers. “Headaches. Numbness. Dizziness. A cancer that would put them in a flag-draped coffin.”

Biden poignantly recalled the memory of his late son, Beau Biden, who died from brain cancer in 2015.

“We don’t know for sure if a burn pit was the cause of his brain cancer, or the diseases of so many of our troops,” Biden said. “But I’m committed to finding out everything we can.”

About half of those exposed believe they have symptoms associated with the exposure, and another 41 percent are unsure if their symptoms are related.

“My eyes burned. It was hard to take a deep breath when I coughed and it made chest hurt and it made me cough,” Katie Purswell, a former veteran and director of health policy at the American Legion, said during a press conference on Capitol Hill Wednesday.

“I choked on the odor from the winds when they would pick up after a while. I started waking up with bloody noses. It was difficult and painful to breathe. After I got home, I had bronchitis for a year. I don’t think my runtime has ever recovered. I just can’t take a deep breath anymore,” she said, describing the symptoms she faced following prolonged exposure to toxic burn pits while stationed overseas.

Purswell was joined by former veterans, advocates, members of Congress, and comedian Jon Stewart at the Capitol Wednesday in support of a bill the House intends to pass Thursday.

“Last night, they were seen,” Stewart said of the president’s national address. “The president of the United States saw their struggle.”

The group is calling on Congress to pass the bill, Honoring Our PACT Act, that aims to improve health care and benefits for veterans exposed to toxic substances.

Currently, the Department of Veterans Affairs decides these exposure claims on a case-by-case basis, with the exception of those filed for asthma, rhinitis or sinusitis. The burden of proving one’s illness is related to a burn pit exposure falls on the veteran, leading to delays in health care.

“There is no other toxic exposure legislation in Congress like it in scope or soundness,” Rep. Mark Takano, chairman of the House Veterans’ Affairs Committee, said Wednesday.

The California Democrat authored the legislation that has bipartisan support in the House.

“Without hesitation, our veterans raised their right hand to protect and defend this nation. And many are now sick as a result of that service. We made a pact with these individuals — a pact I’m afraid to say we have not yet honored,” Takano said.

Takano said his bill will address the full gamut of issues affecting toxic exposed-veterans, access to health care and benefits, while also reforming the VA’s “presumptive” decision-making process to provide health care to more than 3.5 million veterans who have been exposed.

The White House on Monday announced that the Department of Veterans Affairs is also making efforts to rework their policies – the VA proposed a rule that would recognize nine new respiratory illnesses as conditions that are presumed linked to a veterans’ military service, which would help fast track them for payouts and medical care.

Dennis McDonough, secretary of Veterans Affairs, alluded to the proposed changes during an interview with ABC News last month.

The Senate Veterans Affairs Committee is undertaking its own effort to address the issue of toxic exposure for veterans as part of a three-step, bipartisan approach. But advocates, including Stewart and Feal, say the Senate’s effort doesn’t go as far in scope.

Some senators, however, are concerned that the House’s version of the bill is too pricey: the House bill calls for nearly $300 billion in spending over 10 years.

House Speaker Nancy Pelosi called out Republicans who voted against the bill for its hefty price tag at her press briefing Thursday.

“It really amazed me, and I’m rarely amazed and surprised around here,” Pelosi remarked to reporters.

“Oh really?” she went on, directing her ire at Republicans.

“You just gave tax cuts in 2017 to the richest people in America,” she said, referring to the Republican tax plan that went into effect under the Trump administration.

“Tax cuts for the rich. Cancer for our veterans. That’s how we see this discussion and this debate,” she added.

During Wednesday’s press conference with advocates, Pelosi — flagged by Stewart and Feal — defended the price tag.

“Don’t even talk to us about the price,” Pelosi said. “This is a cost of war that we should recognize … it’s going to be worth it. But it’s going to have a big price tag.”

“Because what we are looking at is the value of what this does for our country,” she said.

Sources familiar with the process told ABC News that members of the House and Senate will have to figure out their policy differences and take their respective bills to conference in the coming months to reach a final compromise.

The process could delay passage in the Senate for months to come before it would eventually reach Biden’s desk for his signature.

Stewart and Feal had a stark message for members of the Senate.

“Once this is done, make no mistake, then the battle shifts to the Senate. And as you know, they are excellent at killing things that are necessary. And we cannot allow it to happen,” Stewart said. “And you cannot allow this feeling of unity and hope and finally being seen to dissipate. We need all of your help to put the pressure on to make sure that the comprehensive needs that they have are passed.”

“Let Schumer know that we want a bill compatible to the honorable PACT Act. If he does not do that, then I will make his life miserable,” Feal said.

A spokesman to Schumer said in a statement to ABC News: “Leader Schumer believes strongly in this bill and will do everything he can to pass it.”