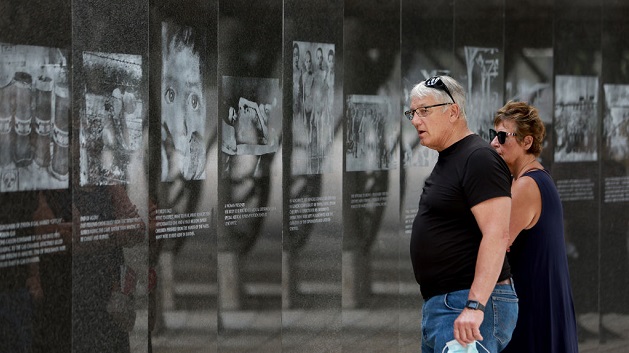 (WASHINGTON) — As the world marked International Holocaust Remembrance Day on Thursday, the warning to “never forget” took on renewed meaning.

President Joe Biden, who was scheduled to host a 90-year-old Auschwitz survivor Bronia Brandman in the Oval Office, released a statement honoring the lives of the 6 million Jews and millions of others murdered by the Nazis while also highlighting the dangers of forgetting, denying and warping the history of the Holocaust.

“We must teach accurately about the Holocaust and push back against attempts to ignore, deny, distort, and revise history…We must continue to pursue justice for survivors and their families,” he said in a statement.

Thursday’s day of remembrance, the 77th anniversary of the liberation of the Auschwitz-Birkenau concentration camp, comes amid rising concerns about antisemitism. A report released last fall by the American Jewish Committee found that one in four American Jews were targeted by antisemitism in the previous year.

Less than two weeks ago, a rabbi and three others were taken hostage for hours at a synagogue in Colleyville, Texas, resulting in the death of the gunman by police.

And the Holocaust has been invoked repeatedly in the debate on masks, sparking outrage that its atrocities are being minimized.

There have also been concerns that Holocaust history is being whitewashed in the nation’s classrooms.

The latest controversy arose on Wednesday, when a Tennessee school board voted to ban “Maus,” a Pulitzer Prize-winning graphic novel depicting the Holocaust from the curriculum due to profanity and an image of a nude woman. In the book, cartoonist/artist Art Spiegelman tells the story of his parents’ time in a Nazi concentration camp.

Some of those lessons were on display Wednesday, when the United States Holocaust Memorial Museum held a virtual commemoration with reflections from Holocaust survivors on their experiences and the challenges that remain in the fight against antisemitism.

“Every day, we relive and remember how hatred tore apart our families, our communities and our world. Now we see a number of alarming events that we never imagined could happen in our adopted homeland,” said Péter Gorog, a volunteer at the museum, who was forced to flee his home as a young boy and live in a ghetto in Budapest.

“There are attacks against Jews and Jewish institutions in cities and towns across the world, fueled by antisemitic rhetoric, conspiracy theories and the persistent misuse of the Holocaust to promote an agenda.”