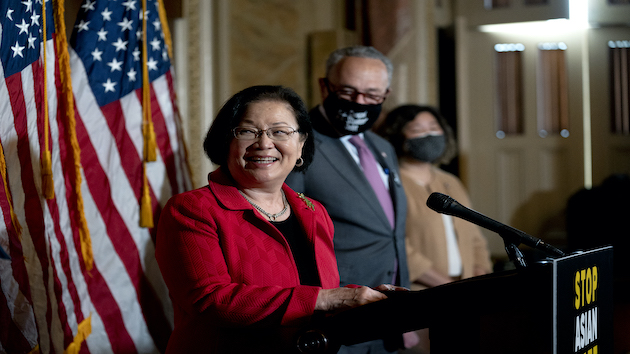 (WASHINGTON) — As the Senate prepares to take up her anti-Asian hate crime bill this week, Sen. Mazie Hirono, D-Hawaii, said Monday the bill represents a chance for lawmakers to “take a stand” against rising anti-Asian attacks.

“At a time when the Asian America Pacific Islander community feels under siege and vulnerable, this is a bill that enables the Senate at least, and I know followed by the House, to take a stand and say these kinds of unprovoked attacks targeting Asian Americans are totally unacceptable,” Hirono told the hosts of ABC’s “The View.”

Hirono, who is Japanese American, has been leading the Senate effort with Illinois Democrat Sen. Tammy Duckworth to pass legislation following a surge in anti-Asian crimes.

Majority Leader Chuck Schumer announced a new conference in New York Monday morning that the Senate will take a final vote on the legislation on Wednesday. The bill received an overwhelming green light from members of both parties in a procedural vote last week.

“I dare any Senator to vote against it,” Schumer said. “If they do, shame on them.”

Despite often-bitter partisanship in the evenly divided Senate, Hirono’s modest proposal, introduced on the heels of the shooting of eight people, including six Asian women, at several spas in the Atlanta area last month, is expected to garner some Republican support.

Even before the shooting, there has been a rise in anti-Asian targeting and crimes over the last year.

An analysis released by the Center for the Study of Hate and Extremism at California State University, San Bernardino in March found that there was a 149% rise in hate crimes against Asian Americans over the 16 cities they surveyed.

Hirono’s bill would assign a point person at the Department of Justice to expedite the review of COVID-19-related hate crimes, provide support for law enforcement agencies to respond to hate crimes, and aims to coordinate with local and state partners to curb discriminatory language used to describe the COVID-19 pandemic.

“This is a really simple bill,” Hirono said on ABC’s “The View.” “All it does is it asks the Department of Justice to appoint somebody to review these crimes and to work with state and local law enforcement and community advocates to report these crimes because they are very under reported.”

While the bill has bipartisan backing, Republicans have said they’d like to see some changes to it, including a tweak in language tweak to language that currently requires hateful rhetoric or action to be linked to the pandemic to qualify under the bill. A number of lawmakers are concerned it might prove onerous for law enforcement to prove this link.

Hirono has said she’s open to the change, but she and other Senate Democrats also want to emphasize that they see a clear link between the rise of anti-Asian sentiment and former President Donald Trump’s rhetoric on the COVID-19 pandemic.

Trump blamed the virus on China and branded it the “Kung Flu,” something Hirono has said prompted the rise in Asian hate.

Hirono said she has personally experienced a growing sense of fear as crimes against her community have ratcheted up.

“It certainly gives me pause,” Hirono said. “I used to walk around listening to audio tapes with my ear pods on I don’t do that anymore I need to be very aware of my surroundings.

Hirono details many of her experiences as a Japanese-American immigrant in her new book, “Heart of Fire: An Immigrant Daughter’s Story,” set to release Tuesday.

Her childhood experiences have informed her legislating, both on the anti-AAPI bill and on immigration reform.

When Hirono immigrated to Hawaii with her mother and older brother, her younger brother had to be left in Japan. She said the trauma her brother experienced has informed her politics. She’s been an outspoken advocate for families immigrating to the U.S., and adamantly opposed the family separation policy implemented by the Trump administration.

“When Trump began to separate thousands of children from their parents I knew the kind of trauma we were inflicting on these children and on their families and I spoke out,” Hirono said. “We now have an administration that wants to have a humane immigration policy and that is going to take time because what was left by the Trump administration was I would say an immigration policy that was not humane and that left our policies in shreds.”