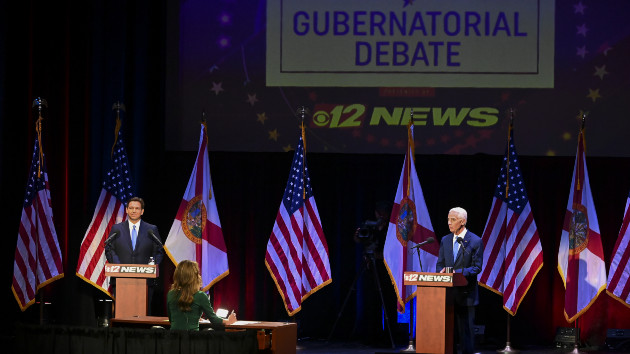 (WASHINGTON) — Monday night’s debate between Florida’s Republican Gov. Ron DeSantis and Democratic challenger Charlie Crist began with a question about the economy, but both politicians began with the answer they had prepared — previewing what was to come.

“DeSantis has signed a bill that would restrict that [abortion] right, even in cases of rape or incest,” Crist said.

With his time, DeSantis said, “Charlie Christ has voted with Joe Biden, 100% of the time.”

The governor sought throughout the debate to compare Crist with President Joe Biden, who is unpopular across the country, while describing himself as an advocate for his state’s interests, such as the economy and education.

DeSantis, seeking reelection four years after evolving from narrow winner to rising GOP star, parried blows from Crist with the stump speech he often gives, not just in Florida but across America: flaunting many of the social issues he has legislated on, such as restricting what is taught in schools.

At the debate, he more often directed his comments to the public than to Crist, whom he rarely mentions on the trail. But he used some chances to sully his rival by saying the former congressman would have made the wrong choices as a leader, weakening businesses during COVID-19 and allowing more abortions.

Crist has aligned himself with Biden throughout the campaign, calling Biden the “best president” and planning to fundraise with him days before the election. But at Monday’s debate he also talked about his own four years as governor, when he was a Republican, and accused DeSantis of being a divisive, fickle figure who would soon abandon Florida for a presidential bid.

Crist — who trails in the polls by some eight points, according to FiveThirtyEight — said he was, by contrast, a “commonsense” uniter of people who wouldn’t take away Floridians’ rights, such as the ability to access abortion. The state’s current law bans the procedure after 15 weeks, even in cases of rape and incest, though there are exceptions for the health of the mother and fetal abnormalities. The ban is being reviewed by the courts.

Again and again on Monday, Crist returned to the issue of abortion access and to his criticism that DeSantis had other career plans. At one point in the debate, he asked DeSantis to “look in the eyes of the people of state of Florida and say to them if you’re reelected you will serve a full four-year term as governor.”

“It’s not a tough question. It’s a fair question. He won’t tell you,” Crist said, before the moderator interrupted and clarified that candidates were not supposed to ask each other questions.

DeSantis then shot back: “I know that Charlie is interested in talking about 2024 and Joe Biden, but I just want to make things very, very clear. The only worn-out old donkey I’m looking to put out to pasture is Charlie Crist.”

Throughout the debate, the in-person crowd reacted raucously: yelling, clapping, cheering, jeering. At one point a voice yelled out “liar!” as DeSantis spoke.

Below, more highlights from the night:

Crist called DeSantis’ move to use tax funds to send migrants to Martha’s Vineyard a “stunt,” while the governor defended the move as bringing attention to a serious issue at the southern border.

“We have an immigration problem … but it doesn’t mean that you use Florida taxpayers’ dollars to charter jets to go to Texas, lie to people to get them onto planes, fly them up to the northern part of our country,” Crist said, adding, “It’s not right, and you were inhumane.”

DeSantis responded by saying it was “sad that it comes to this” but that sending the migrants to what he called liberal, elite areas of the country put the issue “front-and-center.” He linked immigration to the flow of deadly narcotics into the U.S.

“I think we need to secure the border, because the fentanyl is absolutely out of control,” he said.

DeSantis and Crist were asked at what point in a pregnancy should abortion become illegal.

“I’m proud of the 15 weeks that we did,” DeSantis said, before going on to accuse Crist of supporting a wide range of abortion procedures such as “until the moment of birth.”

Crist called that a lie.

DeSantis then attacked Crist for having switched parties — and political views: “He used to support a federal constitutional amendment that outlawed all abortion regardless of any type of exceptions. Now he’s taken the other extreme position.”

“Is this an honest change of heart?” DeSantis said. “Or is this a guy that’s going to shift with whatever wind he needs to, to try to keep his political career alive? I think we all know the answer to that question.”

DeSantis largely spoke about his credentials, taking few shots at Crist while touting his own record, particularly in the early months of the COVID-19 pandemic when Florida did not institute some of the restrictions that other states did in an attempt to curb cases and deaths.

DeSantis said that doing so would have ruined the tourism industry that beats at the heart of the state.

“I kept this state open and I kept the state free, and we now have the biggest budget surplus in the history of Florida,” he said, as he often does on the road as he stumps.

On the subject of home insurance — average insurance costs have roughly tripled in Florida since DeSantis’ tenure began — the governor blamed “Biden/Crist” policies and costs of litigation.

Crist laid the blame for some cost-of-living issues with DeSantis.

“Since you’ve been governor, every utility rate increase has been granted for Florida Power and Light … They’ve all gone up and up and up. When I was governor, they went down,” he said.

“We need to have a governor who will do what’s right for the people of Florida, all the time, all year-long, not just when it’s right before a reelection,” he said.

DeSantis hit back on oil and gas prices, which polls show are also top of mind for voters.

“Then why are fuel and natural gas prices up — because of the Biden/Crist energy policies?” he said, which he said were also fueling high inflation.

“He’s locked together with these policies that have hurt so many people,” DeSantis said of Crist, who responded by focusing on other issues.

“I think it’s incredible that we hear this out of Ron DeSantis … everybody watching tonight knows that your property insurance is up under him,” Crist said. “You deserve a governor who has your back. I always did. And I always will.”

Crist said that as a congressman after being governor, he had voted for a major infrastructure bill under Biden “that got the Sanibel bridge built back up as quickly [as] you took credit for.”

Despite Biden’s praise of DeSantis for his handling of Ian — the deadliest storm in the state in at least 60 years — Crist said the governor “failed” by not getting Florida more prepared. He accused DeSantis of attending a high school football game the Friday before the storm.

Crist echoed some criticism that Lee County should have been more forcefully encouraged to evacuate. The area was the epicenter of where Ian made landfall in Florida.

“That’s not a good record. That’s not good leadership,” he said.

DeSantis shot back by citing Crist’s trip to Puerto Rico during the earlier Hurricane Fiona.

“You know what he was doing during this?” DeSantis said. “He was in hiding out in Puerto Rico. He wasn’t helping his community here, and then when he got back what did he do? His campaign was soliciting campaign contributions from storm victims. That is unacceptable, and that’s not what a leader would do in a time of despair.”

Of the local hurricane response for Ian, DeSantis said, “I stand by every one of our local counties. They stood up and learned, and they made the best decisions with the information that they had.”

He and others have previously said the hurricane prediction models limited how quickly officials could respond because the models were inconsistent.

When the debate turned to education and what was appropriate in public schools — particularly on LGBTQ topics and teaching race and American history — DeSantis reiterated that he viewed it as a parental rights issue and a question of what was “appropriate.” He said he didn’t want race to foment hate in classrooms.

DeSantis responded by pointing to Crist’s own comment earlier in the campaign that DeSantis supporters had “hate in their heart,” which Crist said on his first day of being the Democratic nominee.

On critical race theory — historically a university-level subject that conservatives argue has started to influence grade schools — DeSantis said that all history should be taught but “what I think is not good is to scapegoat students based on skin color.” The governor this year signed a law to ban certain concepts related to critical race theory from schools.

Crist replied: “He talks about not teaching about the history of our country that might offend some people in our schools. We ought to teach facts in our schools … We shouldn’t have a whitewashed approach to educating our children.”

“You’re taking away from all these other issues because you don’t want to talk about taking away a woman’s right to choose. That’s unconscionable,” he said.

Both Crist and DeSantis addressed their decisions during the early months of the pandemic.

Crist said he “would have listened to scientists, unlike the governor” — accusing DeSantis of being “so arrogant that you won’t listen to their advice.”

“Ron, I wouldn’t pat yourself on the back too much about your response to COVID,” he said, invoking the state’s death toll of more than 80,000.

“When you look at the Thanksgiving table, one of those empty seats is probably one of those people for many families watching tonight,” he said.

DeSantis said his policies focused on protecting the vulnerable — like older people — while trying to ensure businesses wouldn’t close under government restrictions to slow infections.

“I can tell you, as Charlie Christ and his friends in Congress were urging you to be locked down, I lifted you up,” DeSantis said.

He also highlighted how he stopped schools from requiring COVID-19 vaccines.

Crist pointed back to how DeSantis and Disney were at odds over a law banning discussion of sexual orientation and gender in some public-school classrooms. Crist also invoked DeSantis’ disagreement with cruise lines over COVID-19 vaccination requirements.

“You’re the most anti-business governor I’ve ever seen,” Crist said.

“Except for all the businesses that are moving down here and leading the nation in net immigration,” DeSantis said back.

Each candidate was asked where they stood on gender confirming procedures and therapies when used by minors.

“When they say ‘gender-affirming care,’ they mean giving puberty blockers to teenage girls and teenage boys,” DeSantis said, arguing that transgender children were seeking out and being given major surgeries like mastectomies.

“It’s inappropriate to be doing that,” he said.

“This reminds me of your position on a woman’s right to choose: You think you know better than any physician or any doctor — or any woman in a position to make decisions about their own personal health. You want to be the judge,” he said.

When DeSantis’ suspension of Andrew Warren — a local prosecutor who said he wouldn’t bring charges over abortion — arose, Crist cast the issue in non-legal terms, saying DeSantis was silencing a critic.

“When you start removing people from public office, that’s the job of the people. He was twice elected state attorney in Tampa Bay,” Crist said.

DeSantis said he removed a law enforcement official who had said he could act outside the law: “I acted appropriately and I would do it again.”