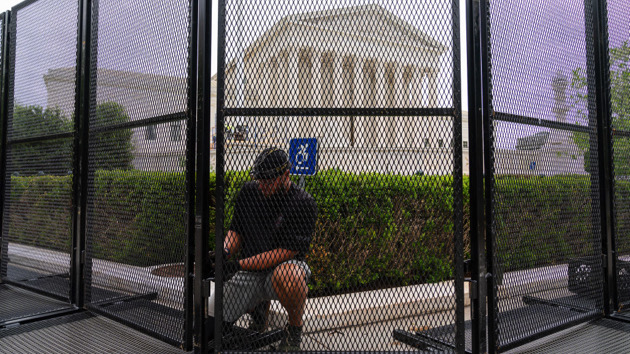 (WASHINGTON) — A new, imposing eight-foot-high fence was erected overnight at the U.S. Supreme Court in the wake of protests over a bombshell draft opinion on abortion.

The leaked ruling, not yet final but confirmed to be authentic by the court, indicated its conservative majority is poised to overturn Roe v. Wade — the landmark decision that has guaranteed a woman’s right to abortion for almost the past 50 years.

Abortion rights activists — and some anti-abortion protesters — have rallied at the Supreme Court each day since Politico reported the draft document on Monday, including the preliminary votes of the majority.

Protesters on both sides of the issue gathered again in front of the building around noon on Thursday.

Neither the Supreme Court nor Capitol Police have said anything publicly about possible threats to the court or the justices.

The protests outside the court’s marble front steps have been largely peaceful, prompting some to question why the new security barrier — reminiscent of the unscalable fencing placed around the U.S. Capitol after the violence of Jan. 6, 2021 — is necessary.

John Becker, a spokesperson at Catholics For Choice, said the measures appear “ominous and disproportionate to what has actually been transpiring on that plaza.”

But the court has often been a magnet for threats and security concerns. Just two weeks ago, a man reportedly described as an environmental activist died after setting himself on fire on the court’s front plaza, possibly related to his views on climate change.

A Supreme Court spokeswoman declined to comment on the fencing, citing a longstanding policy of not discussing security operations.

The justices are scheduled to next meet in person for a private conference on May 12. A final decision in the abortion case, which centers on a Mississippi law banning the procedure after 15 weeks of pregnancy, is expected by the end of June or early July.

In the draft opinion, dated Feb. 10, Justice Samuel Alito wrote, “Roe was egregiously wrong from the start,” adding, “We hold that Roe and Casey must be overruled.”

If the draft document by Alito were to hold as written, access to abortion across the country could be upended. Thirteen states have so-called “trigger laws” in place to swiftly ban abortion if Roe v. Wade is repealed.

Democrats on Capitol Hill are working to bring forward legislation to codify abortion rights at the federal level. Senate Majority Leader Chuck Schumer said he plans to hold a vote as soon as next week.

The House of Representatives passed the Women’s Health Protection Act to codify Roe last fall but the bill has stalled in the Senate. Any other legislation would likely meet a similar fate in the evenly divided chamber.

The Supreme Court’s leaked opinion draft’s language has sparked concern that other unenumerated rights may be at stake, including gay marriage and contraception.

“This is about a lot more than abortion,” President Joe Biden said while giving remarks at the White House on Wednesday.

“What are the next things that are going to be attacked?” Biden asked. “Because this MAGA crowd is really the most extreme political organization that’s existed in American history — in recent American history.”

The court confirmed the draft was authentic on Tuesday, and Roberts stated he’s directed the start of an investigation into the leak. Supreme Court Marshall Gail Curley, a career Army lawyer, will lead the probe.

“We at the Court are blessed to have a workforce — permanent employees and law clerks alike — intensely loyal to the institution and dedicated to the rule of law. Court employees have an exemplary and important tradition of respecting the confidentiality of the judicial process and upholding the trust of the Court,” Roberts said in a statement. “This was a singular and egregious breach of that trust that is an affront to the Court and the community of public servants who work here.”