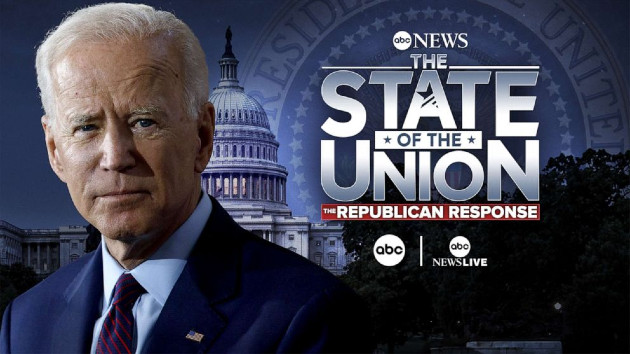 (WASHINGTON) — President Joe Biden will deliver the State of the Union address Tuesday night amid the Russian invasion of Ukraine, changing public health guidance around COVID-19 and as the nomination process for his Supreme Court pick gets underway.

Coverage will air on Tuesday from 9 p.m. to 11 p.m. ET on ABC. The speech is being broadcast on ABC stations, as well as Hulu, Roku, YouTube TV, Amazon Fire tablets and TV stick, Xumo, Sling TV, Facebook, Twitter, ABCNews.com and the ABC News and ABC mobile apps.

Biden, whose address begins at 9 p.m. ET, is expected to speak on a variety of issues facing the nation, with a specific focus on the economy as inflation soars and supply chain problems create shortages across the country.

ABC News Live will stream from Capitol Hill throughout the day, with live coverage of the State of the Union address beginning at 8 p.m. ET and a roundtable with Houston voters on what they hope to hear from the president’s speech. At 11 p.m. ET, ABC News Live will feature lawmakers from both sides of the aisle reacting to the speeches.

ABC News Digital will have an up-to-the-minute live blog, key takeaways focusing on main themes, an analysis of the speeches’ political implications and full transcripts of and reaction to the remarks.