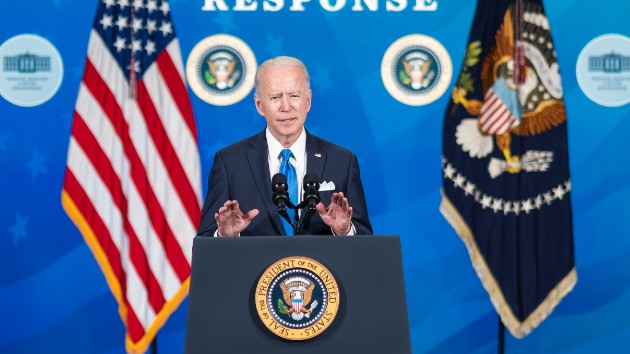 (WASHINGTON) — President Joe Biden’s new benchmark in the fight against COVID-19 — ensuring 70% of American adults get at least one shot by July 4 — seems to be a tacit acknowledgement of what scientists have been saying now for months: Eradicating the virus that causes COVID-19 might not be possible. But if enough Americans get some protection, it’ll become manageable.

That approach is being embraced by scientists and politicians alike as a considerably more pragmatic approach to dealing with COVID-19 than the idea of waiting on “herd immunity,” especially considering that a fourth of Americans might never accept the vaccine.

“We’re going to have highs and lows of case numbers potentially for years, but those are going to be in the population that chooses not to vaccinate,” said New Hampshire Gov. Chris Sununu in a phone interview Tuesday.

Since the pandemic began, Americans have embraced the idea that the virus would one day evaporate, either because enough people became infected with the virus or received a vaccine. That collective, or “herd,” immunity would block the virus from transmitting to new people, eradicating the threat.

The idea was so alluring that some top advisers to President Donald Trump called for allowing younger people to get sick with the virus so it would go away sooner and businesses could reopen without restrictions. Trump, who last fall jumbled his reference to the term as “herd mentality,” predicted that “with a vaccine, I think it will go away very quickly.”

“We’ve got to reach the point where we have herd immunity — meaning where we have a vast majority of the American people have been vaccinated — before we can stop wearing these,” Biden said this spring, holding up his mask.

Since then, however, the U.S. vaccine rollout has slowed considerably with only 32% of the population fully immunized. Big federally run vaccination sites are closing up shop in favor of smaller mobile vans that reach people in rural and other hard-to-reach neighborhoods.

And for the first time, some states this week were expected to decline portions of the vaccine doses available. Administration officials told governors in a weekly phone call Tuesday that because some states were expected to leave behind supply, other states can now ask for added doses if they want it.

The sudden slowdown so early in the rollout of vaccinations has health officials warning that eradication of the virus might not be possible. Another concern is that potentially dangerous global variants could form overseas that threaten the efficacy of the vaccines. Health officials have already predicted that booster shots will probably be needed for years.

“Eradication was never in the cards … COVID is with us for the indefinite future,” said Dr. Tom Frieden, the former director of Centers for Disease Control and Prevention.

“That doesn’t mean that the pandemic is with us. We can end the pandemic,” he said, noting the U.S. could manage smaller isolated outbreaks in ways it can’t with the current level of 50,000 some infections a day.

Biden seemed to acknowledge as much in his remarks Tuesday.

Scientists said the concept of herd immunity has always been nuanced and a difficult threshold to pinpoint. Although often taken to mean total eradication of the virus, herd immunity can also be defined around more manageable goals, such as dramatically slowing down transmission.

Dr. Anthony Fauci, the nation’s top infectious disease expert, had initially estimated that roughly 70-85% of a population must become immune to the virus for it to go away, but he’s since backed away from the number.

In a private phone call Tuesday between the nation’s governors and the White House, Fauci tried to steer state officials away from any estimate because he said no one knows what the magic number would be.

“The one thing … that we absolutely know for sure is that as you get more and more people vaccinated, the number of cases are going to come down and down and down. So our goal is just get as many people as you can possibly get vaccinated, and don’t get hung up on this elusive concept of a number that nobody really knows what that number is,” Fauci told the governors.

According to a senior administration official, Biden’s new benchmark was less about doing away with any notion of herd immunity and more about setting “a collective goal for the country” now that the president’s first 100 days in office had passed.

But Biden’s 70% figure of vaccinated adults also appears to be a nod to the “tipping point” in COVID cases that health experts and state officials have witnessed on the ground. That’s the point at which hospitalizations and death rates plummet after enough people are vaccinated.

In New Hampshire, for example, more than 60% of adults already have the first dose, making it one of a few states with the highest vaccination rates and inching close to Biden’s goal of 70%.

Sununu, a Republican, said he sees that as a success.

“We’re there,” Sununu said when asked what success might look like in the pandemic. “I don’t mean to like sugarcoat it but … our economy is booming. And everyone who wants one of the vaccines has it.”

Dr. Paul Goepfert, professor of medicine at the University of Alabama at Birmingham and director of the Alabama Vaccine Research Center, said he thinks the “ultimate definition of success” would be hospitalizations and deaths similar to that of the seasonal flu or lower. Annual flu deaths are estimated to go as high as 60,000 in a year.

Dr. Paul Offit, the director of vaccine education and physician of infectious diseases at Children’s Hospital of Philadelphia, said one benchmark could be how the country fares next fall. If fewer than 50 people die every day of COVID by next November through January — a period of time you’d expect to see deaths peak — that could be considered a success, he said.

“If we have an adequate level of population immunity, then we will only have a small bump (in cases) over the winter. If on the other hand we don’t, then we will again see a surge next winter,” Offit said.

Frieden said new, potentially more dangerous variants of the virus developing overseas remain the wildcard. Introduction of such a variant could change that equation for any state with large pockets of unvaccinated people. That’s why getting as many people vaccinated as possible has to remain the goal.

“I understand that people want clarity,” Frieden said. “But the reality is that there’s a lot we don’t know. And if people tell you with great certainty that they know, they don’t know what they are talking about.”