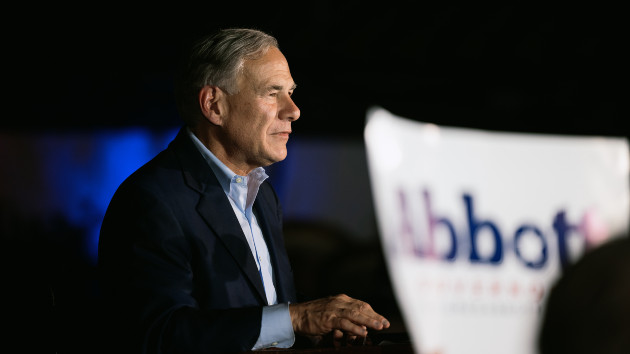 (NEW YORK) — Texas Gov. Greg Abbott on Monday pushed back against the White House’s sharp criticism of him busing more migrants to Washington, D.C., over the weekend — where they arrived outside Vice President Kamala Harris’ home on Christmas Eve in subfreezing temperatures.

“The White House is full of a bunch of hypocrites, led by the Hypocrite-in-Chief …. Instead of their hypocritical complaints about Texas providing much-needed relief to our overrun and overwhelmed border communities, President Biden and Border Czar Harris need to step up and do their jobs to secure the border—something they continue failing to do,” Renae Eze, a spokesperson for Abbott, said in a statement.

Abbott has been periodically busing migrants from Texas for months in protest of “reckless” federal border policies, he has said, and to provide “relief” to border communities.

A spokesperson for the Texas Division of Emergency Management said in September that the state had spent more than $12 million on the trips, which include charter buses and security.

The White House on Sunday labeled the latest busing a “cruel, dangerous, and shameful stunt.”

Amy Fischer, an aid worker who was outside Harris’ residence at the Naval Observatory, said that 139 migrants, including many families, arrived late Saturday in three buses and none wore cold-weather gear. The temperature was in the teens.

The people were subsequently taken to an area church, Fischer told ABC News.

Eze, Abbott’s spokesperson, said in the statement on Monday that the people who were bused “willingly chose to go” and “signed a voluntary consent waiver available in multiple languages upon boarding that they agreed on the destination.”

Eze then redirected the blame back on the federal government.

“They were processed and released by the federal government, who are dumping them at historic levels in Texas border towns like El Paso, which recently declared a state of emergency because of the Biden-made crisis,” Eze said.

The White House, for its part, said Sunday that they believed a political solution was still possible.

“As we have repeatedly said, we are willing to work with anyone — Republican or Democrat alike — on real solutions, like the comprehensive immigration reform and border security measures President Biden sent to Congress on his first day in office, but these political games accomplish nothing and only put lives in danger,” a spokesman, Abdullah Hasan, said in a statement.