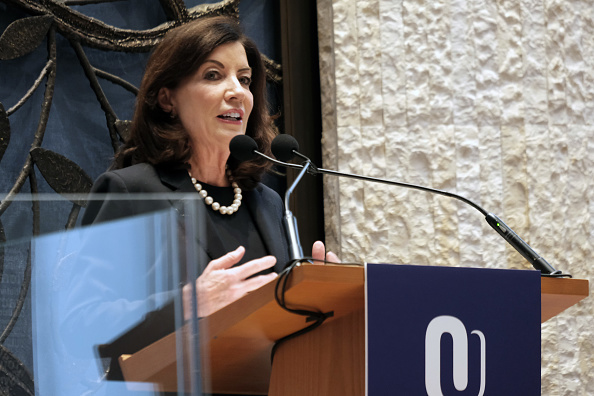 “Clemency is a powerful tool that can be exercised to advance the interests of justice and fairness, and to recognize efforts made by individuals to improve not only their own lives but the lives of those around them,” Hochul said in a statement Tuesday.

Nine people with strong ties to the United States who are facing barriers to U.S. citizenship or residency have been granted pardons.

Many have lived in the U.S. for the majority of their lives and will be reunited with their families in the country following their release, avoiding deportation, according to a statement from Hochul’s office.

“These grants of clemency serve not only to acknowledge the steps these individuals have taken to rehabilitate themselves, but to remind others that such change is possible and that nobody should be defined by their worst mistake,” Hochul said.

Hochul is also commuting the sentences of four individuals who she said are “demonstrating remorse” and “exemplifying rehabilitation,” including Jacqueline Smalls, a survivor of domestic violence, who fatally stabbed her abuser when he entered her home in violation of two active orders of protection.

This followed similar incidents that resulted in Smalls’ abuser “choking and assaulting her,” leaving Smalls to fear for her life, according to Hochul’s office. She was sentenced to 15 years in prison and has served more than 10 years. Smalls will be reunited with her daughter, Hochul’s office said.

Anthony Evans, 56, will also have his sentence commuted. He was “exposed to crime and substance abuse, and his family was greatly impacted by steel mill closures and deindustrialization in the Buffalo area” at a young age, according to Hochul’s office.

Evans, convicted of burglary, has spent the past 19 incarcerated years earning his GED, becoming active in his religious community, rebuilding ties with his family, and helping other incarcerated individuals earn and maintain their sobriety, Hochul’s office said.

Bruce Bryant, 53, who was 23 years old when he was convicted of murder, now leads anti-violence workshops, founded a program that raises money for gun buy-backs, book donations, and more charitable causes. Bryant has also established a mentoring program against youth violence, according to Hochul’s office.

Stanley Bellamy, 60, has served more than 37 years out of a 62-and-a-half-year to life sentence for murder.

“Bellamy has earned recognition as a leader and mentor, and has developed and facilitated a wide range of programming on topics like conflict resolution, anger management, self-development, and personal responsibility,” a statement from Hochul’s office read.