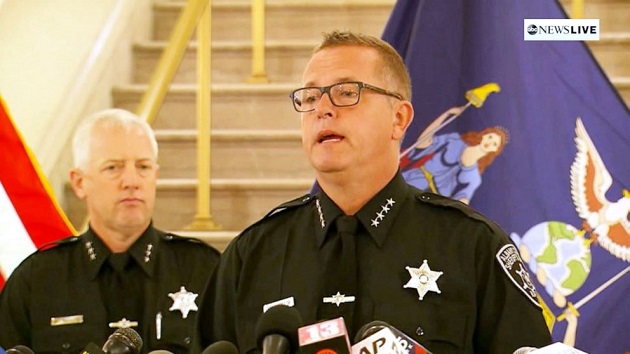 (NEW YORK) — The Albany County sheriff said during a press conference that New York Gov. Andrew Cuomo could face a possible misdemeanor charge following a criminal complaint filed against him this week.

Sheriff Craig Apple told reporters Saturday that the investigation is in its “infant stages” and the complaint made against Cuomo is “criminal in nature” and the alleged conduct was “sexual in nature.” No reports will be released to the public.

The claim was filed Thursday by a former New York State employee who claimed the governor groped her breast at the governor’s state residence in 2020. She is referred to as “Executive Assistant #1” in New York Attorney General Letitia James’ report released Tuesday.

Apple said that authorities sat with the complainant and her lawyer for an hour Thursday.

He said that the county sheriff’s office has reached out to James’ office to request investigative material used in the report, which concluded Cuomo violated state and federal law in sexually harassing at least 11 women.

Apple said next steps include waiting for the attorney general’s investigation material to come in and an interview with the victim. From there, the sheriff’s office will sit with the Albany district attorney’s office to decide whether to move forward with a criminal charge.

When asked what possible charge Cuomo could face, Apple said: “From what I’ve read so far I can say we’re floating around a misdemeanor, but again, that’s just from the attorney general report.”

Cuomo has denied all allegations of sexual harassment.

He responded to the Tuesday report with a video address stating: “I want you to know directly from me that I never touched anyone inappropriately or made inappropriate sexual advances.”

“He is 63 years old. He has spent 40 years in public life and for him to all of the sudden be accused of a sexual assault of an executive assistant that he really doesn’t know, doesn’t pass muster,” Glavin said in a press conference Friday in response to the complaint.

So far at least five district attorney offices — Manhattan, Albany, Westchester County, Nassau County and Oswego County — have launched investigations into Cuomo for alleged incidents outlined in the report that took place in their jurisdictions.

Following the Saturday press conference, Fabien Levy, the press secretary at the New York State AG office released a statement saying, “We will cooperate fully with the Albany sheriff and turn over all evidence related to this complainant. Similarly, we will cooperate with all law enforcement agencies, as appropriate.”