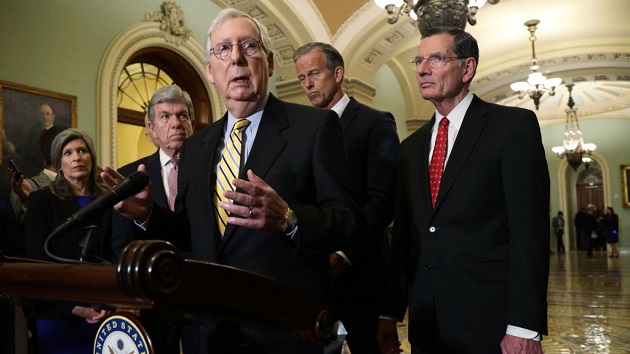 (WASHINGTON) — The day after President Joe Biden touted a deal with a bipartisan group senators on an infrastructure package, other Republican lawmakers have raised new questions about whether they’ll support it, objecting to his saying he won’t sign the measure — if it passes — unless it’s tied to a separate larger package aimed at funding his key priorities.

The infrastructure deal, presented to the White House by five Democratic and five Republican senators, proposes $1.2 trillion in core infrastructure spending on items such as roads, bridges and waterways.

But even as told reporters, “we have a deal” on Thursday, Biden joined a chorus of Democrats who have said their willingness to advance the infrastructure package depends on whether a second, $6 trillion dollar spending package, focused on other Democratic “human infrastructure” priorities, including child care and housing, can also get the green light in Congress.

“If this is the only one that comes to me, I’m not signing it,” Biden said, referring to the infrastructure package. “It’s in tandem.”

That ultimatum from Biden could threaten the success of the bipartisan deal, as Republicans cry foul.

“Less than two hours after publicly commending our colleagues and actually endorsing the bipartisan agreement, the president took the extraordinary step of threatening to veto it,” McConnell said. “An expression of bipartisanship and then an ultimatum on behalf of your left-wing base.”

McConnell, R-Ky., has been briefed by Republican members of the negotiating group, but he hasn’t yet said whether he intends to support the bipartisan bill if it advances to the floor.

GOP Sen. Lindsey Graham, R-S.C., one of the 11 Republicans who initially backed the bipartisan deal, went a step further, calling Biden’s conditioning of the bipartisan package on a reconciliation bill moving in tandem, “the ultimate deal breaker for me.”

“No deal by extortion!” Graham tweeted. “It was never suggested to me during these negotiations that President Biden was holding hostage the bipartisan infrastructure proposal unless a liberal reconciliation package was also passed.”

But White House press secretary Jen Psaki on Friday rejected claims that Biden pulled a fast one on Republicans.

“You all have heard the president say multiple times publicly that he wanted to — he was going to move these bills — wanted to move forward in parallel paths, and that’s exactly what’s happening,” Psaki said. “That hasn’t been a secret, he hasn’t said it quietly he hasn’t he whispered it he said it very much, out loud to all of you as we have said many times from here.”

Psaki said it is up to Congress to determine the mechanics of delivering both packages to Biden’s desk, but she took a swipe at Republicans threatening to block the bipartisan deal.

“If they are going to vote against a historic investment in infrastructure that’s going to rebuild roads and railways and bridges — bridges in their communities, simply because they don’t like the mechanics of the process, that’s a pretty absurd argument for them to make,” Psaki said. “Good luck on the political front on that argument.”

If other Republicans follow Graham’s lead and buck the bipartisan package because of Biden and Democrats tying it to passing a larger spending package through reconciliation, that creates a very difficult challenge for Majority Leader Chuck Schumer, who needs 60 votes — including 10 Republicans — to advance the bipartisan infrastructure package on the Senate floor.

Schumer has said for weeks he intended to pursue a so-called “dual-track” approach that would move both the bipartisan infrastructure package and the second spending package — supported by only Democrarts — at the same time.

That promise was essential in getting progressive Democrats in line behind the bipartisan deal. For every Republican who has threatened to vote against the bipartisan bill if it is tied to a reconciliation package, there is a Democrat whose said such a tie is a requirement for their support.

Sen. Elizabeth Warren, D-Conn., said Thursday that “there’s commitment in our caucus that one pieces is not going to go forward and leave the rest of it back in the train station.” Sen. Kirsten Gillibrand, D-N/Y., told ABC News that commitment to reconciliation is a pre-requisite for her support of the bipartisan bill.

“There will not be a so-called bipartisan package without a major reconciliation package,” Senate Budget Committee Chairman Bernie Sanders, I-Vt., said Thursday.

Many of the Republicans who made up the bipartisan group negotiating on infrastructure have previously dismissed Democratic efforts to move forward by using “reconciliation.” Republicans used the same budget tool in 2017 to implement then-President Donald Trump’s signature tax cuts over Democratic efforts to filibuster, and many are resigned that the Democratic majority has the power to use reconciliation if they can muster consensus in their caucus.

But reconciliation requires 50 Democratic votes, and in the evenly divided Senate, it’s still unclear those votes are there.

Sen. Joe Manchin, D-W.Va., is a part of the group that crafted the bipartisan bill. He said Thursday he’s not yet ready to commit to his fellow Democrats that he’d back the reconciliation package.

“I’m open that we should be working on it,” Manchin said. “But I don’t know what’s in this plan. To say that one is being held hostage by the other doesn’t seem fair to me.”

Schumer said he wants the Senate to vote on both the bipartisan deal and a budget reconciliation package in July, before the Senate departs for its August recess.

But moving both packages on such an accelerated timeline, with such thing Democratic margins in both chambers, could prove to be a huge challenge for Biden’s key legislative priorities.