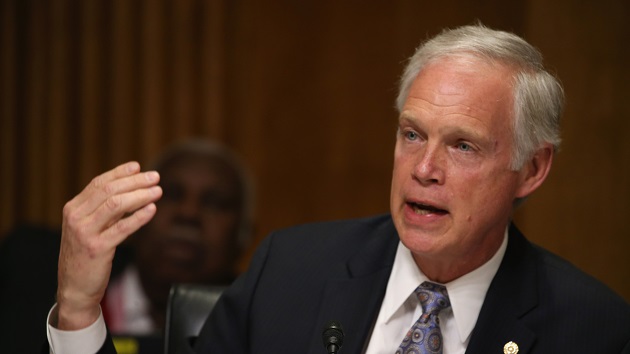 (WASHINGTON) — Wisconsin Sen. Ron Johnson is facing backlash for comments he made Thursday about Black Lives Matter and antifa that have been deemed “racist” and “unacceptable.”

Johnson, a Republican, told a Wisconsin Radio show host that he was not concerned for his safety during the Jan. 6 attack on the Capitol, which left five dead, but that he may have been if the protesters had been linked to those groups.

Johnson said he “never really felt threatened” because the protesters were largely “people that love this country, that truly respect law enforcement, would never do anything to break a law.”

But Johnson told radio host Joe “Pags” Pagliarulo, “Had the tables been turned and President Donald Trump won the election and those were thousands of Black Lives Matter and antifa protestors I would have been concerned.”

Over 300 people have been charged in connection to the Capitol attack, and investigations are ongoing. Protesters who breached the Capitol on Jan. 6 injured dozens of Capitol Police officers, who were met by an often-violent and armed mob attempting to enter the Capitol building. Pipe bombs were placed at the RNC and DNC headquarters in advance of the riot. The breach required members of the House and Senate, as well as former Vice President Mike Pence, to be evacuated from their respective chambers, and led the House of Representatives to bring an article of impeachment against Trump, who was later acquitted by the Senate.

The breach of the Capitol stemmed from a “Save America” rally at which Trump encouraged supporters to march to Capitol Hill, where Congress was meeting to certify Joe Biden as the 46th president of the United States.

“Senator Johnson’s remarks are racist and unacceptable. There is nothing patriotic about storming the Capitol to attempt to overturn an election and murder elected officials,” the statement reads. “Apparently for Ron Johnson, simply being Black is a bigger offense than launching a violent insurrection. Ron Johnson is an embarrassment to the United States Senate and the state of Wisconsin. He needs to resign immediately.”

Rep. Ted Lieu, a manager in Trump’s second impeachment trial tweeted at the senator: “I reviewed many of the videos and statements we submitted during the Impeachment trial. The mob murdered a police officer and injured 140 other officers. They would have hurt you if they got their hands on you. That’s why Senators hid that day. Remember?”

No one has been charged in connection with the death of officer Brian Sicknick. His cause of death remains unknown.

Johnson, in response to a request for comment from ABC News, cited data on Black Lives Matter protests from over the summer.

“Out of 7,750 protests last summer associated with BLM and Antifa, 570 turned into violent riots that killed 25 people and caused $1-$2 billion of property damage,” Johnson said. “That’s why I would have been more concerned.”

Johnson’s office did not reply to a request for additional information on the source of the data cited by the senator, but some of the information Johnson references appears to be drawn froma study conducted by the Armed Conflict Location & Event Data Project, a data collection, analysis and crisis mapping project cited by several major universities.

The study did look at 7,750 Black Lives Matter movement events in the context of 10,600 protests during the summer months and found that of all those protests, 570 “involve demonstrators engaging in violence.”

“In more than 93% of all demonstrations connected to the movement, demonstrators have not engaged in violence or destructive activity,” the study found.

Sam Jones, senior communications manager for ACLED, told ABC News that Johnson’s statement is “not an accurate portrayal of our findings.”

“It was an overwhelmingly peaceful movement,” Jones said.

Even when Black Lives Matter events did have violent outcomes, Jones said the ACLED study could not account for who perpetrated the violence.

“In many of these cases police took a heavy-handed approach to break up the protests, prompting clashes with demonstrators and escalating the event into violence,” Jones said. “Additionally, in some cases, violent or destructive behavior may have broken out as a result of aggressive intervention by counter-demonstrators or non-state actors like militia groups, and BLM-linked demonstrations were also targeted in dozens of car-ramming attacks throughout the year. It would be accurate and misleading to frame all of these events as ‘BLM riots."”

Johnson is up for reelection in 2022. He has not yet publicly stated whether he intends to seek another term. If he does, his vulnerable seat will be a target for Democrats.

Johnson has made several comments in recent months giving credence to unfounded conspiracy theories and downplaying the Capitol attack.

During a Feb. 23 hearing focusing on Capitol security, Johnson read an account of a conspiracy theorist suggesting that the crowd was “jovial, friendly” and “earnest.” Shortly after Jan. 6, Johnson told Milwaukee ABC affiliate WISN, “This didn’t seem like an armed insurrection to me. When you hear the word ‘armed,’ don’t you think of firearms? Here’s the questions I would have liked to ask: ‘How many firearms were confiscated? How many shots were fired?"”

Johnson was also among those who tried to help Trump by objecting to the counting of electoral ballots on Jan. 6 and led a Senate probe on Biden’s son, Hunter Biden.

Pagliarulo came to Johnson’s defense in a tweet Saturday.

“The left is freaking over what @SenRonJohnson said in our interview yesterday. Some calling him a racist and me as well,” he tweeted. “You can disagree with him if you want but claiming racism is just weak.”