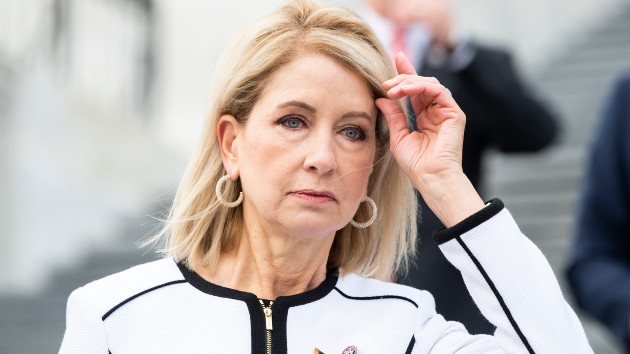 (WASHINGTON) — The husband of Rep. Mary Miller, R-Illinois, has tried to distance himself from what the FBI says is a “radical militia group” with ties to last month’s Capitol siege, after his pickup truck was seen on Capitol grounds that day with a large decal promoting the group.

When news of the decal promoting the “Three Percenters” militia group surfaced this week, Miller’s husband, Illinois state representative Chris Miller, told the Daily Beast he “didn’t know anything about [the group] until fake news” started asking questions about the decal seen on his vehicle.

In a statement to ABC News, Chris Miller said his son received the sticker “from a family friend who said that it represented patriotism and love of country.”

Miller insisted he has never been a member of the group.

But this isn’t the first time he has helped promote the Three Percenters. In videos posted online, including one video posted to his own Facebook page, he stood in front of a Three Percenters banner — and a QAnon sign — last year as he railed against Democrats.

“We can be thankful [that] neither ‘Crooked Hillary’ or ‘Creepy, Sleepy Joe’ will ever be the president of the United States,” he said in the video, which was shot at a May 2020 rally in Springfield, Illinois, where he and many others protested state measures to curb the COVID-19 pandemic. “We can be thankful … that we have a great American patriot in the White House that is determined to make America great again.”

An Illinois-based group that helped organize the rally uses a logo that features “Three Percenters” imagery. The group promised followers ahead of the rally that “some big speakers” would be participating.

In another video of his remarks posted online, Chris Miller declared, “We have identified our domestic enemies as Nancy Pelosi.”

On Jan. 6, the same day that a violent mob stormed the Capitol based on false claims that the 2020 presidential election had been stolen from then-president Donald Trump, his pickup truck was reportedly seen outside the Capitol building with the Three Percenters decal on its rear window.

The link between the truck and the Illinois congresswoman was first reported Thursday by the Twitter account @capitolhunters, which is helping to research those who participated in the Jan. 6 attack, according to the Daily Beast.

The day before the Jan. 6 riot, Rep. Miller faced calls for her resignation after she cited Hitler in remarks at a rally outside the Capitol building.

“Hitler was right on one thing: He said, ‘Whoever has the youth has the future,"” she told supporters at the Jan. 5 event. She has since apologized but said that critics “twist” her words.

A spokesperson for Rep. Miller told ABC News that the congresswoman joins her colleagues in condemning the violence of Jan. 6 and that “she and her family were in no way involved in the violent attacks.” The spokesperson did not respond to ABC News’ questions about Miller’s husband.

The Justice Department has publicly accused several of those involved in the Capitol siege of having ties to the Three Percenters.

“For context, the Three Percenters … is a domestic militia that advocates for resistance to the U.S. federal government policy it considers to infringe on personal, local, and gun ownership rights,” an FBI agent wrote in one set of charging documents.

The group’s name stems from the view that just three percent of the population can successfully overtake a corrupt government.

According to the statement from Chris Miller provided to ABC News through a spokesman, any Capitol rioters tied to the Three Percenters have just “copied their name,” as the “original” Three Percenters were “a non-violent anti-government group” that has since been “disbanded.”

Members of the movement’s more recent iteration “were not involved in the Jan. 6th riots,” Miller said in his statement. But authorities have disputed that claim, as photos showed Three Percenter banners at the riot, and the FBI — according to an ABC News count — has arrested at least five followers of the group on charges stemming from their role in the attack.

Nevertheless, Chris Miller has now removed the Three Percenters sticker from his truck, the statement said.