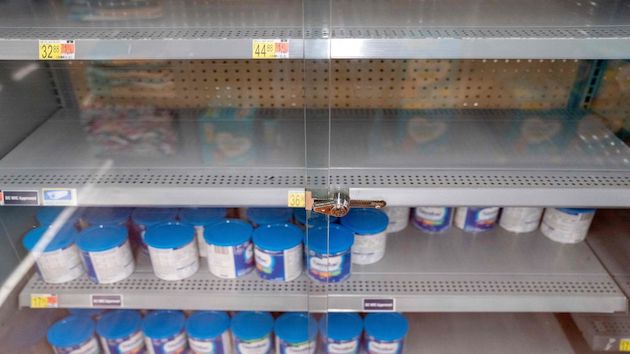 (WASHINGTON) — The White House is moving to deal with yet another crisis with potentially damaging political consequences: a nationwide shortage of baby formula.

In the meantime, the White House will be urging states to let parents use their benefits from the Special Supplemental Nutrition Program for Women, Infants, and Children (WIC) to purchase formula. The administration is also calling on the Federal Trade Commission and state officials to crack down on any instances of price gouging.

The FDA is expected to announce ways the U.S. can import more formula products from abroad in the coming days.

Even as one company said it could take up to two months to get its product back in stores, the FDA wouldn’t provide an estimate on when shelves will be replenished.

“We absolutely recognize the frustration that American families are feeling right now,” one official said on Thursday, “and that’s why the president has acted to direct administration to pull additional levers, take additional action to make more supply available as quickly as possible.”

Or as House Speaker Nancy Pelosi, a California Democrat put it during her weekly press conference: “Right now the baby’s crying, the baby’s hungry, we need to address it right now.”

“The steps the President took today are an acknowledgment and a recognition that more needs to be done. That we do not want parents, mothers, families out there to be stressed and worried about feeding their babies,” she said. “We are working. We are seeing increases over the last couple of weeks. More needs to be done. We are going to cut every element of red tape we can cut. We are going to work with manufacturers, we’re going to import more, to expedite this as quickly as possible.”

“If you are a parent who is looking for formula right now, struggling to find what you need, do you have, even have a rough guess of how long these shortages are going to last? pressed ABC News Senior White House Correspondent Mary Bruce.

“Well, we’ve already seen an increase in supply over the past couple of weeks. What we are seeing, which is an enormous problem, is hoarding. People hoarding because they’re fearful,” Psaki answered. “Our message to parents is we hear you, we want to do everything we can and we’re going to cut every element of red tape to help address this and make it better for you to get formula on the shelves.”

.@MaryKBruce: “When will parents be able to get the formula they need?”

Psaki: “FDA took a step to ensure that babies were taking safe formula…We’re going to work with manufacturers, we’re going to import more to expedite this as quickly as possible.” https://t.co/9KEtZZ0mlF pic.twitter.com/qZSdrHH3ry

A shortage of formula has been a long-standing problem because of supply chain problems, but the situation was made even worse when Abbott — one of the largest manufacturers of formula in the nation — announced in February a recall of three popular brands and shut down its Sturgis, Michigan, plant due to contamination concerns.

The company took the action after complaints of Cronobacter sakazakii and Salmonella Newport infections in infants who consumed the formula. Two of the infants died.

Parents report scrambling to find formula as the out-of-stock rate for baby formula hit 43% at the end the first week of May, according to a report from the real-time data tracking agency Datasembly.

Public outcry has garnered the attention of lawmakers on Capitol Hill — providing Republicans with another line of attack against the Biden administration.

Sen. Mitch McConnell, R-Ky., read letters he received from worried parents and grandparents aloud the floor of the Senate on Thursday.

“This outrageous, unacceptable situation has been unfolding in slow motion over several months,” McConnell said. “Much of it stems from a recall that resulted in a plant being shut down. But it seems that while President Biden’s administration and the FDA knew all about this problem as it developed, they had been asleep at the switch in terms of getting production back online as fast as possible.”

A group of House Republicans held a press conference Thursday to discuss the issue, hitting Biden for not getting ahead of the problem.

“This is not a Third World country” said Republican Rep. Elise Stefanik. “This should never happen in the United States.”

As outrage from the public intensifies, the FDA this week said it’s doing “everything in our power to ensure there is adequate product available where and when they need it.”

“Ensuring the availability of safe, sole-source nutrition products like infant formula is of the utmost importance to the FDA,” Commissioner Robert M. Califf said in a statement. “Our teams have been working tirelessly to address and alleviate supply issues and will continue doing everything within our authority to ensure the production of safe infant formula products.”

Abbott has said it could restart operations at its Michigan plant within two weeks, so long as it gets a green light from the FDA. From there, it would take the company six to eight weeks to get the new product to shelves.