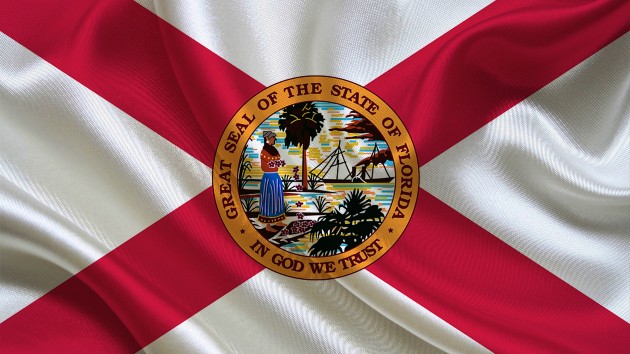 “In about an hour, behind this door at meeting facility at Airport Hilton in West Palm Beach, @GovRonDeSantis will sign law making it harder for some people to vote. No Florida reporters allowed in because he’s given an exclusive to cable channel Fox News for the bill signing,” tweeted Anthony Man, the senior political writer for the South Florida Sun Sentinel.

He said that “hundreds” of DeSantis’ and former President Donald Trump’s supporters were also allowed into the event.

“Not a single reporter is being let in. This in a ‘sunshine’ state that prides itself on open government,” CBS12 reporter Jay O’Brien echoed.

O’Brien said his station was supposed to be a pool camera to feed the event to other affiliates across the country.

DeSantis’ spokespeople did not respond to ABC News’s inquiries about the event. ABC affiliate WPBF-TV said other outlets were allowed in after DeSantis signed the bill and made remarks, which happened live on Fox and Friends around 8:45 a.m.

“This keeps us ahead of the curve,” DeSantis said. “We’re proud of the strides that we’ve made. We’re not resting on our laurels and me signing this bill here says, ‘Florida, your vote counts. Your vote is going to be cast with integrity and transparency."”

Democrats were united against the bill, saying it’s unnecessary and meant to suppress the vote among historically disenfranchised communities. One Republican senator also voted against the bill. Craig Latimer, president of the Florida Supervisors of Elections Association, issued a statement after the bill passed saying while some of the “most disenfranchising” provisions were cut from the bill before passage, “this legislation still makes requesting Vote By Mail ballots and returning those ballots harder.”

Florida’s bill, SB 90, imposes new limitations on mail voting, including lessening the number of elections a single vote-by-mail application covers and restricting ballot drop boxes. Only drop boxes at main office locations, not the ones at early voting locations, can be open after regular hours but all drop boxes must be physically manned by an election worker when they are accessible to voters. While they did not require in person monitoring, drop boxes did have to be under constant video surveillance previously.

SB 90 also bars local agencies from accepting outside money for nearly all election-related expenses and from mailing unsolicited ballots to voters and imposes new voter ID requirements when applying for a mail ballot or updating one’s voter registration record. The bill also bans what Republicans call “ballot harvesting” — someone collecting and returning others’ mail ballots — by limiting voters to possessing ballots belonging only to members of their or their spouse’s immediate family and a maximum of two other voters per election.

Just after DeSantis signed the bill, two lawsuits were filed challenging the new law. The first, filed against the secretary of state, attorney general and all 67 county election supervisors, states that the bill will “impede every step of the voting process in Florida,” but that it will not impact the state’s voters’ equally.

“It is crafted to and will operate to make it more difficult for certain types of voters to participate in the state’s elections, including those voters who generally wish to vote with a vote by-mail ballot and voters who have historically had to overcome substantial hurdles to reach the ballot box, such as Florida’s senior voters, youngest voters, and minority voters,” the complaint reads.

The plaintiffs include the League of Women Voters of Florida, Black Voters Matter and the Florida Alliance for Retired Americans. As relief, the plaintiffs request that several provisions of the bill, including the ones around drop boxes and vote-by-mail requests, are declared unconstitutional.

The NAACP Legal Defense and Educational Fund also filed a lawsuit challenging the law, alleging it violates the Voting Rights Act, Americans with Disabilities Act and the First and Fourteenth Amendments of the U.S. Constitution.

DeSantis’s reported media snub hearkens back to what unfolded in Georgia at the end of March, when Georgia GOP Gov. Brian Kemp signed the Peach State’s sweeping new election bill, SB 202 or “The Election Integrity Act of 2021,” and ignited a nationwide outcry, marking the first significant battle in what’s become a war over voting rights. Kemp signed the bill behind closed doors, later posting a photo of it to Twitter that enraged activists and Democratic lawmakers as one state representative, Park Cannon, was arrested after continuing to knock on the door where Kemp was delivering remarks to media after signing the bill, hoping to gain access. Six lawsuits have been filed challenging Georgia’s law.

The effort to impose new voting restrictions following months of Trump and allies spreading conspiracies about a rigged and stolen election is not unique to Georgia and Florida. State lawmakers introduced hundreds of bills during the 2021 legislative session that would reduce access to the ballot and at least five other restrictive voting bills have been enacted in other states. Texas lawmakers are set to take up one of its omnibus elections bill, HB 6, for a floor vote Thursday.