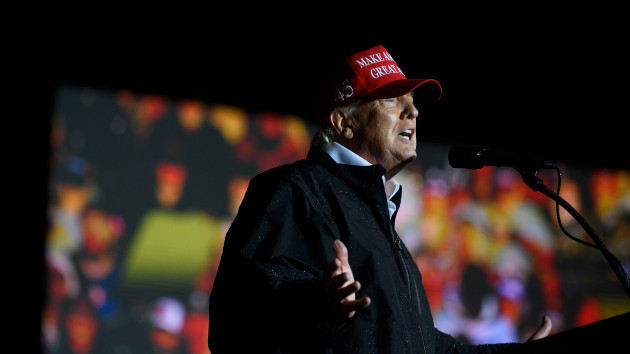 (WASHINGTON) — As the 2022 midterm elections approach, some GOP super PACs are spending millions of dollars to oppose primary candidates endorsed by Donald Trump — suggesting a deepening rift within the Republican Party.

In several high-profile primaries, GOP donors — some dissatisfied with the direction of the national party as Trump teases another White House bid in 2024 — have poured large sums into supporting Republicans running against Trump-backed candidates, financial disclosures show.

The Ohio Senate GOP primary last week was an early demonstration of Trump’s continued influence over the party, as the Trump-endorsed candidate, Hillbilly Elegy author J.D. Vance, claimed victory with the backing of Trump-aligned megadonors like Peter Thiel and Rebekah Mercer. Yet Vance’s GOP rivals — most of whom also identify as supporters of Trump — were backed by millions of dollars from top Republican donors like Bernard Marcus, Stephen Warren and Paul E. Singer.

All told, the race drew more than $40 million in spending from super PACs and outside groups over the last few months, according to Federal Election Commission disclosure filings.

Similarly, the Pennsylvania Senate GOP primary slated for next week has already seen close to $30 million in spending from outside groups, including from super PACs funded by top Republican donors like Singer, Ken Griffin and Stephen Schwarzman. To date, GOP groups have spent more than $20 million to attack Trump-endorsed candidate Dr. Mehmet Oz and support his primary rival David McCormick, filings show.

And in North Carolina, another Senate GOP primary slated for next week has attracted $18 million in outside GOP spending, split among Trump-backed candidate Ted Budd and his rivals.

The split is even evident within some super PACs themselves. Club for Growth Action, one of the highest-spending conservative groups this cycle, has aligned itself with all the Trump-endorsed congressional candidates — except in the Ohio Senate race, where it spent millions attacking Vance while supporting unsuccessful primary contender Josh Mandel.

Last month, when the group refused to switch its allegiance to Vance following Trump’s endorsement of him, Trump allegedly sent a message to Club for Growth President David McIntosh through his assistant, saying “Go f— yourself,” according to reporting from The New York Times’ Maggie Haberman.

McIntosh declined to comment to ABC News on the alleged clash with Trump — but he said that competitive GOP primaries are a “good signal” for the Republican Party.

But some Republicans are ruing the fanfare over Trump’s endorsements and the national party’s support of the former president.

Asked by ABC News if she sees herself donating to the Republican National Committee this year, former Bush White House adviser and longtime Republican fundraiser Bobbie Kilberg said, “No — absolutely not.”

Instead, she and her husband Bill Kilberg hosted a fundraiser in March for Rep. Liz Cheney of Wyoming, who has emerged as one of the leading anti-Trump voices within the GOP as she co-leads the congressional investigation into the Jan. 6 attack on the U.S. Capitol.

While Trump-aligned Republicans attack Cheney and push the RNC to oust her from the party, financial disclosures show that the three-term representative is on a streak to break her own fundraising record this cycle as scores of anti-Trump Republicans across the country rally behind her.

“We think it’s important for the future of the Republican Party that people be willing to stand up to Trump and not be bullied by his unconscionable behavior,” Bill Kilberg said regarding Trump’s ongoing push to overturn the 2020 presidential election.

Former Rep. Francis Rooney, R-Fla., who was among the early Republicans to come out against Trump and the RNC, told ABC News that “more and more people are speaking up” — but that “the voices are still too few.”

One of several Republican lawmakers who announced their retirement after clashing with pro-Trump forces within the GOP, Rooney, a longtime Republican donor, maxed out his contributions to Cheney’s campaign and hosted a fundraiser for her last year. He said he’s no longer giving to the RNC and other Republicans, except for Cheney and just a few others, because he’s tired of the Trump-dominated narrative within the Republican Party.

“There’s a few that stepped up, like Bobbie,” Rooney said of Kilberg. “But a lot more people are still just staying on the sidelines while Trump’s got his hardcore people funding him.”

Nevertheless, Rooney said he believes that Trump-backed candidates will wither in the upcoming midterms.

“Will Trump’s candidates win? Is his endorsement worth anything? Once all that is debunked, then we can say the guy’s power will start to go away,” Rooney said.

“I think the RNC seems only kind of half-in on this cycle, and in my opinion, they’re hoarding cash and their media buys are relatively light,” Eberhart said.

He also criticized the RNC’s agreement to pay up to $1.2 million of Trump’s legal bills with its donor money, as ABC News previously reported.

“Donors give money to win the next cycle and to get the Republican message out for the next cycle, and I bet 99% of them wouldn’t want Trump’s legal bills paid … especially when he has more cash on hand,” Eberhart said.

Trump’s Save America PAC and his various fundraising vehicles have raised hundreds of millions of dollars over the past year and a half, frequently pushing unproven claims about election fraud and touting support for 2022 Republicans. Just last month, Save America reported having more than $110 million in cash on hand as of March.

But very little of the money Trump has raised so far has gone to candidates it supports, according to disclosure reports, other than a $500,000 donation to a super PAC campaign against GOP Gov. Brian Kemp of Georgia, and a little more than $1 million in total donations to various federal and state-level candidates.

“This is a cycle where the wind is at our back,” Eberhart said. “And yet, we’re holding ourselves back with all this friendly fire with Trump trying to use the party to settle grievances and giving out endorsements that are not strategic.”

Despite an increasing number of Republicans voicing dissatisfaction, the national party committee and most party leaders continue to strongly align themselves with the former president as they fundraise off of his name, promote his social media platform, and jockey for his support and approval.

And regardless of any internal split, the RNC continues to report strong fundraising figures, outraising the Democratic National Committee every month so far this year. California real estate developer Geoff Palmer, who emerged as one of the biggest GOP donors during the Trump administration, donated more than $300,000 to the committee last quarter, disclosure filings show.

The Trump-aligned super PAC Make America Great Again, Again! — run by former Trump aides — took in $250,000 from Palm Beach waste management mogul Anthony Lomangino, who had not been a major GOP donor until the Trump era. And last month Trump supporters Thiel and Mercer reportedly formed a new coalition of donors called Rockbridge Network to “disrupt but advance the Republican agenda” through a $30 million investment in media, legal, policy and election-related projects, according to The New York Times.

On the other side of the GOP, a new Arizona-based group called Defending America Together — which hasn’t disclosed its donations through the Federal Election Commission — has been spending millions of dollars to support candidates opposed by Trump through a network of committees and super PACs, records show.

Former Trump national security adviser-turned Trump critic John Bolton, who runs the conservative spending groups John Bolton PAC and John Bolton super PAC, told ABC News that although big money is flowing into the Republican Party, it’s important to look at where the uptick is coming from and where it’s going.

“If many of the large donors were basically protesting by signing up to contribute to other party-affiliated things like the Senate Leadership Fund and its counterparts on the House side rather than the RNC, I think it’s something that the RNC ought to take more seriously,” Bolton said.

Bolton also said he believes Trump’s influence over the party is “dramatically waning” to the point that his endorsements could be “irrelevant at best.”

Rooney, too, said he thinks the clock is ticking on Trump’s hold on the Republican Party.

“We’re just going to have to wait and see how this thing plays out,” Rooney said. “It will play out. This guy can’t rule from Mar-a-Lago for the rest of the history of the world.”

But even many of those who criticize the RNC’s current focus on the former president acknowledge that he’s the face of the GOP.

“Trump is the biggest name of the party,” said Eberhart, “and people know the odds are increasingly good for his comeback with MAGA accolades.”

As for the midterms, Eberhart said the GOP will rally around whoever wins the primaries this year.