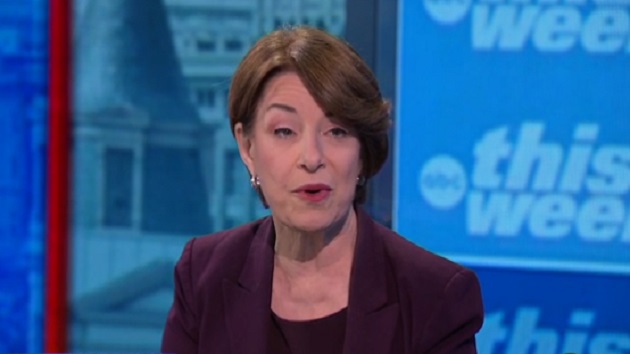 Meadows voluntarily turned over the messages to the committee last year before deciding not to cooperate with the inquiry. In January, the court declined to block the Jan. 6 committee from obtaining Trump White House records over the objection of only one justice: Thomas.

“The facts are clear here. This is unbelievable,” Klobuchar, D-Minn., told “This Week” co-anchor Jonathan Karl in an exclusive interview on Sunday. “You have the wife of a sitting Supreme Court justice … advocating for overturning a legal election to the sitting president’s chief of staff.”

“She also knows this election — these cases are going to come before her husband,” she added. “This is a textbook case for removing him, recusing him from these decisions.”

Karl followed up, and “if he doesn’t recuse himself?”

Klobuchar said “the entire integrity of the court is on the line here” and that she’s looking to leadership from Chief Justice John Roberts and the rest of the bench to speak out on the issue.

“They had better speak out on this because you cannot have a justice hearing cases related to this election and, in fact, the ethics rules that apply to all the other federal judges say that if it involves a family member, appearance of impartiality, they have to recuse themselves,” she said.

“So not only should he recuse himself, but this Supreme Court badly needs ethics rules,” Klobuchar added.

Following a week of contentious hearings to consider President Joe Biden’s Supreme Court nominee, Ketanji Brown Jackson, Karl pressed Klobuchar, who was present for those hearings, on whether any Republicans would vote for Jackson, the first Black woman to be nominated to the high Court. With West Virginia Democratic Sen. Joe Manchin making clear his intention to vote for Jackson, she is on track for confirmation with or without GOP support.

“I think she (will). She has in every other nomination that she’s had for very levels of the court… I can’t tell you who. I can’t tell you how much. But I think that will be very important to this process,” Klobuchar said, applauding Jackson as “the pillar of strength” for how she handled Republicans’ “attacks” during the hearings.

In a defining moment of his presidency, Biden warned Russian President Vladimir Putin to not “even think about moving on one single inch of NATO territory,” during a Saturday speech from the grounds of the Royal Castle in Warsaw, Poland.

He also surprised many when he said Putin “cannot stay in power,” leading White House officials to clarify that the United States is not calling for regime change in Russia.

Klobuchar responded by saying she’s been on the Polish-Ukrainian border and seen and heard firsthand the horrors from refugees escaping Ukraine “leaving everything they have behind, everything, their little stuffed animals and their backpacks, moms with suitcases leaving their husbands behind to fight.”

“Vladimir Putin is a monster,” she said. “But the position of the United States government is not to send troops there. It is to give all the aid we can to Ukraine…it’s the humanitarian aid, over $1 billion pledged, taking in over 100,000 refugees, that is what we are doing.”

Karl pressed: “And it’s not regime change in Moscow?”

“That has been made very clear,” she said.