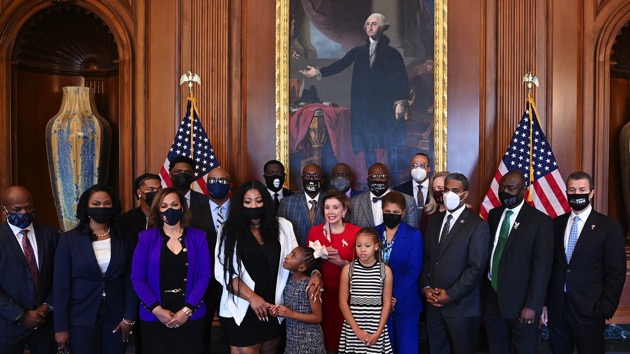 Bass acknowledged the anniversary will pass without new legislation but, surrounded by the Floyd family for a photo op, said getting it right was more important than a deadline.

“What is important is, is that when it reaches President Biden’s desk it’s a substantive piece of legislation, and that is far more important than a specific date. We will work until we get the job done,” Bass said, before Floyd’s brother, Philonese, put pressure on the Senate.

“We need meaningful legislation,” Floyd said. “We need Joe Biden, we need the Senate to get this taken care of because just like Gianna said — you’re daddy’s going to do what?”

“Change the world,” said the 7-year-old Gianna, as everyone applauded.

“This was not only a fight for justice for one man and his family, who I’ve had the privilege to meet with, but a fight against the discrimination that Black men and women suffer at the hands of state power, not just here in America, but around the globe,” Schumer said. “It is a fight that continues today.”

But it is a fight that has produced no real changes over the last year — despite widespread calls on both sides of the aisle to revisit policing in the U.S.

Lawmakers can be expected to tell Floyd’s family what they have said in the past few days as the anniversary got closer — that they are hopeful differences can be resolved soon.

Biden, who has acknowledged Black voters helped win the presidency, has not been especially forceful in putting public pressure on members to pass the George Floyd Justice in Policing Act since calling on Congress during his address to a joint session to “find a consensus” by the one-year anniversary.

The legislation, which passed the House on party lines in March, has yet to be voted on in the Senate, stuck in closed-door negotiations over the issue of qualified immunity, which makes it hard to sue individual police officers.

Later this afternoon, the Floyd family is scheduled to meet with Sen. Cory Booker, D-N.J. and Sen. Tim Scott, R-S.C, according to the family’s attorney Benjamin Crump.

While the legislation in Floyd’s namesake would need support from at least 10 Republicans to pass, Bass, Booker and Scott have working for weeks to bridge the divide between the House-passed Floyd bill and a Republican-backed proposal Scott put forward in the wake of Floyd’s death that Democrats argued didn’t go far enough. The trio has given no indication of what the final legislation will look like or a timeline of when it might be ready for consideration by the Senate.

Booker, one of the bill’s lead negotiators, said in an interview with ABC News Live on Tuesday morning that their talks would take “weeks,” at least.

“There’s still work to do. That’s going to take weeks ahead,” Booker said, later adding, “Everything is on the table right now.”

Between meetings on Capitol Hill, the Floyds are meeting with Biden and Vice President Kamala Harris at the White House in a meeting behind closed doors, in order to have a “real conversation” with the family, White House press secretary Jen Psaki said Monday. Biden, the White House said, will not be making public remarks, as could have been expected if he had been able to sign policing reform with the Floyd family on hand.

Floyd died one year ago after former Minneapolis police officer Derek Chauvin, who was found guilty on all counts for Floyd’s death in April, pinned his knee to Floyd’s neck for more than nine minutes — sparking an unprecedented show of protests during a global pandemic and election year. Biden made addressing racial equity a center point of his campaign, calling it one of the four crises facing the country and pledging to implement real reform under his administration.

Two weeks after his Floyd’s death, his brother, Philonese, testified before House lawmakers in an emotional hearing on policing reform, pleading with them to take action to “stop the pain.”

“I’m here today to ask you to make it stop. Stop the pain. Stop us from being tired,” he said.

One year later, the Biden administration and Congress alike have no final policing reform measure at the federal level, despite calling for change alongside the public outrage. The White House has not given an update on when it would like to see the bill passed, saying only that Biden would like to “sign it into law as quickly as possible.”

In Minnesota, Gov. Tim Walz, a Democrat, signed a proclamation asking Minnesotans for 9 minutes and 29 seconds of silence at 2 p.m. ET/1 p.m. CT to honor Floyd. The Floyd family is scheduled to be with Biden and Harris at the White House at that time — raising questions to whether the White House group will observe the moment, too.

The family is poised to end their day at Black Lives Matter Plaza outside the White House — the same site where thousands poured into the street last year demanding change in the name of Floyd.