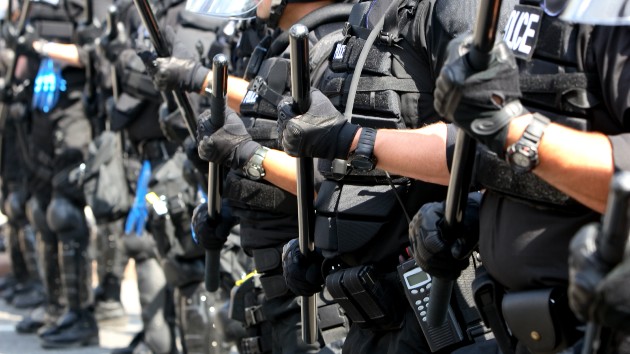 (WASHINGTON) — Dramatic protests that unsettled the nation after the murder of George Floyd in police custody have triggered quiet but growing backlash from state Republican lawmakers who are now pushing legislation to crack down on public demonstrations.

At least 90 bills targeting protests have been introduced across 35 states since last May, according to the nonpartisan International Center for Not-for-Profit Law which has been tracking the legislation.

“We haven’t seen anything like this in our experience tracking these trends,” said Elly Page, the group’s senior legal adviser and director of the U.S. Protest Law Tracker. They are “unprecedented in their nature, in the extreme lengths they go to restrict and chill protest rights.”

Florida last week became the latest state to enact what proponents dub “anti-riot” legislation. The measure tightens penalties for public disorder and the definition of “riot” as a disturbance of as few as three people acting violently.

“It is the strongest anti-rioting, pro-law enforcement piece of legislation in the country and there’s just nothing even close,” Republican Gov. Ron DeSantis said when signing the bill into law.

Kentucky’s Senate recently approved a bill making it a crime to taunt or insult police. In Indiana and Minnesota, bills would cut state benefits for anyone convicted of unlawful assembly.

“The laws create a situation where peaceful protesters are caught up in these criminal charges which often carry very serious penalties, where an individual is deemed guilty of an offense by virtue — not of their own conduct — but of the conduct and actions of people around them,” said Page.

Civil rights advocates said many of the new GOP bills directly threaten the First Amendment right to peacefully assemble, effectively reclassifying some protests as riots and imposing punishment on innocent bystanders if even a few participants turn destructive.

“We’re going to up the penalties for rioting, because what we’ve seen is not peaceful protesting,” said Iowa Rep. Jarad Klein, a Republican sponsor of a bill passed this month to make just being present during a riot a felony.

An independent analysis of 12,000 demonstrations over the last year found most were peaceful — 96% had no property damage, 98% had no injuries reported, according to the Crowd Counting Consortium at the University of Connecticut.

“I really think this bill unnecessarily pits law enforcement against groups like Black Lives Matter and other protesters just at the time when we need to be bringing all of these groups together,” countered Iowa Democratic Rep. Christina Bohannan during floor debate earlier this month.

Critics of the effort said they are most concerned by efforts in several states to extend immunity to drivers who unintentionally hit protesters with their cars. Florida and Oklahoma passed measures offering civil protection this spring.

“It’s really about protecting folks that get caught up in the melee,” said Oklahoma state GOP Sen. Rob Standridge in a video posted to his official Twitter account.

Last year, the driver of a red pickup truck towing a horse trailer was swarmed on a Tulsa interstate during a protest. Several people were injured; the driver, who reportedly feared for his life, was not charged.

“They need to extricate themselves if they feel like there’s an imminent harm. And that’s what the bill does, that it gives them immunity to get out of the situation if imminent harm is there,” Standridge said.

Susan Bro, whose daughter Heather Heyer was killed in a 2017 car attack during a protest in Charlottesville, Virginia, worries the immunity laws could only embolden future potential attackers.

“To me, these are encouraging rioting and murder and mayhem in a number of ways,” Bro told ABC News Live.

“I know that Minneapolis and Seattle frightened a lot of people. I get that. I would have been terrified by myself, regardless of which side I was on,” she said. “But I haven’t seen those kinds of riots and protests happen in a lot of the places that are having these laws put in place now.”

The wave of protest legislation, in part, reflects the nation’s polarized political divide.

While 82% of Democrats in a survey last year said the right to peacefully protest is “very important” for the country, only 53% of Republicans agreed, according to the Pew Research Center. Republican support was down more than 10 points from just two years ago, the group found.

“I think some of these bills are so extreme that they won’t pass,” said Page, “but it’s also the case that more bills have passed at least one chamber of the legislature at this point than we’ve ever seen in prior comparable periods of in prior years.”

Opponents of the GOP bills have vowed immediate legal challenges, ensuring one of the most cherished American rights — the right to protest and speak out — will be a flashpoint in the national political debate for months to come.