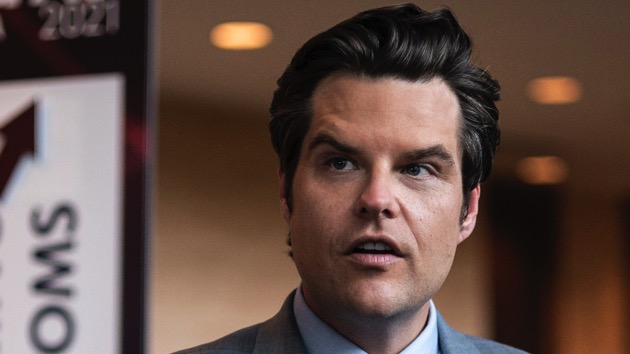 (WASHINGTON) — During the final weeks of President Donald Trump’s administration, Republican Rep. Matt Gaetz asked the White House for a blanket presidential pardon — a request that was ultimately not granted, according to sources familiar with the matter.

Gaetz’s seeking of a preemptive pardon for crimes that may have been committed was first reported by the New York Times.

Trump was aware of Gaetz’s request, but the idea was quickly dismissed inside the White House, sources told ABC News.

The Department of Justice is investigating whether Gaetz had a sexual relationship with a 17-year-old girl and paid for her to travel with him, potentially violating sex trafficking laws.

Gaetz, who has denied any wrongdoing, did not immediately respond to a request for comment from ABC News.

The investigation targeting Gaetz was launched last year when Trump was still president, sources familiar with the matter have told ABC News. It’s not clear whether the White House or Gaetz were aware of the ongoing investigation at the time. Then-Attorney General Bill Barr was briefed on the investigation’s progress several times, the sources said.

“The request was so outlandish, apparently, that even President Trump turned it down,” Michael Waldman, president of the nonprofit Brennan Center for Justice at NYU, told ABC News.

Gaetz previously voiced his support for Trump’s presidential pardons, appearing on Laura Ingraham’s Fox News show on Nov. 24 to declare that Trump should “pardon Michael Flynn, he should pardon the Thanksgiving turkey, he should pardon everyone from himself to his administration officials to Joe Exotic if he has to.”

“Because you see from the radical left a bloodlust that will only be quenched if they come after the people who worked so hard to animate the Trump administration with the policies and the vigor and the effectiveness that delivered for the American people,” Gaetz said. “So I think the president ought to wield that pardon power effectively and robustly.”