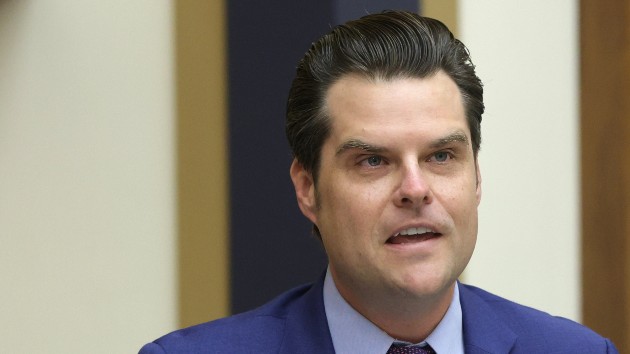 (WASHINGTON) — As Rep. Matt Gaetz faces an ongoing federal investigation into alleged sex trafficking, a new campaign finance report reveals how the Florida congressman is spending the funds that he’s raised amid the scandal.

Since news broke in late March that the Justice Department was investigating whether Gaetz had sex with a 17-year-old and paid for her to travel with him, the congressman has launched a nationwide rally tour and has fundraised off the allegations.

From March 30 through the end of June, his campaign has brought in roughly $1.4 million, a drop from $1.8 million that the campaign took in over the first three months of this year, the filing shows. But the campaign’s spending has jumped since the probe was made public, with $1.9 million in expenditures from April through June, compared to $1.3 million in the first three months of this year, according to the filing.

As the investigation has ramped up, Gaetz has beefed up his legal spending, with his campaign paying $50,000 to law firms in June alone.

Fernich did not respond to a request for comment from ABC News.

The other $25,000 went to the Baltimore office of Zuckerman Spaeder LLP, according to the filing, though it doesn’t say who specifically from the firm was representing the campaign.

Gaetz has also continued to pay political operative Roger Stone amid the ongoing investigation. The congressman first paid Drake Ventures, an LLC connected to Stone, $5,000 on March 24 of this year for “strategic campaign consulting,” and since then has made three subsequent payments totaling $20,000.

In April, the Department of Justice sued Stone and his wife for using Drake Ventures to avoid reporting taxable income to the federal government and for failing to pay $2 million in taxes from 2007, 2011 and 2018. Stone has denied any wrongdoing and said that the lawsuit is “politically motivated.”

Former President Donald Trump commuted Stone’s prison sentence in December 2020 after Stone was charged and convicted on a seven-count indictment of obstructing justice, witness tampering and multiple counts of lying to Congress in the course of special counsel Robert Mueller’s investigation into Russian meddling in the 2016 presidential election. ABC News previously reported that Gaetz sought a blanket presidential pardon from the Trump White House, which was ultimately not granted. A spokesperson for Gaetz, who has denied any wrongdoing, said at the time that the congressman’s request was conflated with a general push for pardons.

“Our FEC filings speak for themselves,” a Gaetz spokesperson said in a statement to ABC News when asked about the new financial filing. “Despite an endless stream of lies from the media, Congressman Gaetz continues to be among the most prodigious fundraisers in Congress and is the only Republican who doesn’t accept donations from federal lobbyists or PACs. He thanks his tens of thousands of donors and promises to always fight for them.”

During the three months after news broke of the scandal, the Gaetz campaign’s biggest payments — more than $825,000 for advertising and strategic consulting — went to a firm named Logan Circle Group, a newly-hired PR group led by Harlan Hill, the filing showed.

Another big chunk went to fundraising consulting, with $120,000 being paid to a new vendor named Trishul LLC and just under $100,000 paid to Red Rock Strategies, according to the filing.

The Gaetz campaign also spent a total of $800 at the Trump hotel in Washington, D.C., for “meal expenses” and a “parking fee” in April and May, the campaign reported in its filing.

Multiple sources have confirmed to ABC News that the DOJ’s ongoing investigation involves Gaetz and former Seminole County tax collector Joel Greenberg, who in June pled guilty to crimes including sex trafficking a minor, and agreed to help prosecutors in the probe.

Gaetz has not been charged with any crime and has vehemently denied any wrongdoing. He has repeatedly denied ever paying for sex or having sex with a minor, and has at times joked about the allegations.

“Today is my birthday […] I already know how CNN is gonna report it: ‘Matt Gaetz has wild party surrounded by beautiful women in The Villages,"” the congressman said at a rally at a Florida retirement community in early May.