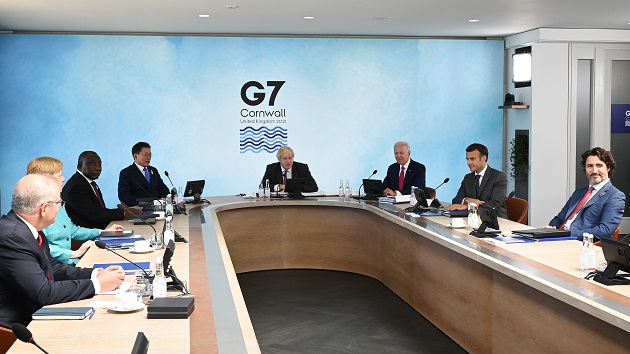 (CORNWALL, England) — The warmth between President Joe Biden and French President Emmanuel Macron continued to be on full display on day two of the G-7 summit in Cornwall, England, on Saturday — with the leaders sitting down for a one-on-one beachside bilateral meeting and Macron agreeing that America is “definitely” back.

“I think that what you demonstrate is that leadership is partnership,” Macron said, adding that he appreciates Biden’s commitment.

The president agreed with Macron, saying, “We, the United States, I’ve said before, we’re back. The U.S. is back.”

Later, ABC News’ Karen Travers followed up with Biden, asking, “Have you convinced allies that America is back?”

In stark contrast with former President Donald Trump threatening to leave NATO and criticizing European countries over defense spending in 2018, Biden solidified the presence of the U.S. in that alliance, saying he supports and feels “very strongly about the cohesion of NATO.”

“The European Union is an incredibly strong and vibrant entity that has a lot to do with the ability of Western Europe to not only handle its economic issues but provide the backbone and support for NATO,” he said.

And in a not-so-subtle jab at Trump, Macron said “it’s great to have the U.S. president part of the club and very willing to cooperate,” following years of Trump alienating some of America’s closest allies.

In 2019, Trump and Macron were on the brink of a trade dispute and exchanged words over NATO.

But on Saturday, Macron thanked Biden for an informal meeting the previous day — which Macron tweeted a video of — and said that the U.S. and France must cooperate to tackle the COVID-19 pandemic and climate change.

“As we say back in the states, we’re on the same page,” Biden said of their conversations.

Tensions are also sure to be high during Biden’s upcoming first summit with Russian President Vladimir Putin in Geneva on Wednesday.

The two will meet face-to-face in two sessions and Biden will not hold a joint press conference with Putin afterward, according to the White House.

“We expect this meeting to be candid and straightforward and a solo press conference is the appropriate format to clearly communicate with the free press the topics that were raised in the meeting — both in terms of areas where we may agree and in areas where we have significant concerns,” a White House official said Saturday.

In an interview with NBC News on Friday, Putin said the relationship between the United States and Russia are at the lowest point in decades and described Biden as “radically different” from his predecessor.

“I believe that former U.S. president Mr. Trump is an extraordinary individual, talented individual, otherwise he would not have become U.S. president,” he said. “Biden is a career man. He has spent virtually his entire adulthood in politics … That’s a different kind of person, and it is my great hope that, yes, there are some advantages, some disadvantages, but there will not be any impulse-based movements on behalf of the sitting U.S. president.”

Biden was asked on Friday what his message to Putin would be, but would only say, “I’ll tell you after I deliver it.”

In the past, the president has not minced words when expressing how he feels about Putin, telling ABC News in March that he thinks he’s a “killer” and that he personally told him in 2011, “I don’t think you have a soul.”

Some of the most prominent issues going into the summit are recent cyber attacks on U.S. companies that have affected millions of Americans and the poisoning and imprisonment of opposition leader Alexei Navalny.

White House press secretary Jen Psaki this week doubled down on Biden using the summit as an opportunity to confront Putin, saying “he’s going to be straightforward” and “candid,” but downplayed expectations of meaningful results.

“We’re not expecting to have a huge outcome from this,” she said on ABC News’ “Good Morning America.”