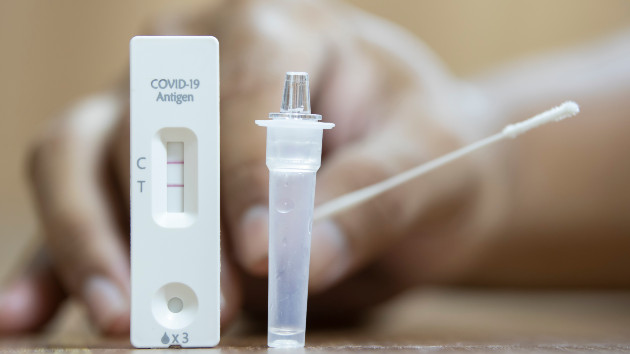 (WASHINGTON) — The Biden administration on Thursday will relaunch its website for ordering free COVID-19 rapid tests.

Each household will be able to order four at-home rapid tests and orders will begin to ship out next week, a senior administration official said in a call with reporters on Wednesday to preview the White House’s winter preparedness plan for the virus.

COVIDTests.Gov had been shut down for about three months, after officials said they needed to hold onto the remaining supply of tests for a potential wave of cases this winter.

The site first launched in January, when President Joe Biden pledged to give out one billion free rapid tests to combat the omicron surge.

But the ordering form was taken offline in September, when the administration said that without more COVID-19 funding from Congress, it couldn’t allow the test supply to diminish any further. Since then, the fight for money has remained in a stalemate, with Republican lawmakers skeptical of its value.

The administration does appear to have found more funds for rapid tests within existing COVID-19 allocations and will not only open up ordering for the tests that still remained back in the stockpile in September but also purchase more, the senior official said.

The official wouldn’t say from what other pandemic-era programs the funds for new tests were pulled or how many tests will be available through the website. Americans ordered about 600 million tests before the government shut down the site in September, or about 60% of the one billion free tests Biden pledged to make available.

“Procurements are ongoing, so I can’t give you exact numbers on how this is going to land. But we feel confident that we’re going to have enough tests to get through this next round for four [tests] per household in the coming weeks,” the official said.

Prior to the portal shutting down, Americans had the opportunity to order 16 total tests per household over three different rounds.

But COVIDTests.gov is not the only way to secure free tests. People can also still purchase up to eight rapid tests per month at drug stores and supermarkets, fully reimbursable by insurance. And though there are less and less in recent months, there are still free government-run testing sites, which can be found on COVID.Gov/Tests.

The administration on Wednesday also announced a handful of other winter preparedness measures, though none amounted to significant new efforts that haven’t been tried throughout the pandemic.

“We know what to do in this moment. We have the tools and infrastructure and know how we need to effectively manage this time to prevent hospitalizations and deaths, minimize disruptions and respond to challenges. Everyone just has to do their part,” the official said.

The administration will encourage governors to set up more vaccination and testing sites, as well as “Test to Treat” sites, where people can get tested for COVID-19 and then prescribed Paxlovid, the antiviral medication that significantly reduces the risk of hospitalization and death for high-risk people if taken within five days of infection.

If necessary, the federal government said they will send teams and medical personnel to alleviate strains on hospitals. The White House also plans to distribute a winter playbook for nursing homes — often sites of significant spread and death, given the age of the people living there — which the administration official described as “a shorthand document focused on updated vaccinations, treatment for residents testing positive and improving indoor air quality.”

The White House’s rollout of a winter preparedness plan comes as cases, hospitalizations and deaths are all on the rise post-Thanksgiving gatherings — and though all three metrics are still lower than they were this time last year, at the beginning of the omicron surge, there is also new public health pressure this year from a sharp rise in cases of flu and respiratory syncytial virus (RSV).

The newest COVID-19 booster shot, a potential mitigation tool, has seen minimal interest, with uptake sitting at just 13.5% of people over 5 years old, according to government data.