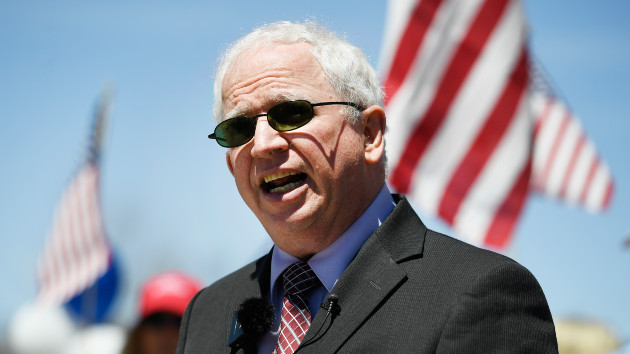 (WASHINGTON) — Just as he was emerging as a top target of the House committee investigating the Capitol attack, former Trump lawyer John Eastman took a trip to Wisconsin.

Eastman, a right-wing lawyer who drafted a plan for former President Donald Trump to cling to power by falsely claiming then-Vice President Mike Pence could reject legitimate electors during the 2020 presidential election, was part of a small group of Trump allies who secured a private meeting last month to try and convince the Republican leader of the Wisconsin state Assembly to decertify President Joe Biden’s win, multiple sources familiar with the meeting told ABC.

On March 16, Eastman and others spent nearly two hours behind closed doors pressuring Republican Wisconsin Assembly Speaker Robin Vos to nullify the 2020 election and reclaim the electors awarded to Biden, the sources said, which legal experts say is impossible.

Eastman was subpoenaed by the congressional committee looking into the Jan. 6 attack on the Capitol in November. He had been bucking the panel’s request for documents, claiming attorney client privilege, until a federal judge recently ordered most of them turned over.

Eastman in the meeting urged Vos to decertify the election, sources familiar with the meeting said. According to Jefferson Davis, a Wisconsin activist pushing to reverse Biden’s victory who was also in the meeting, Trump’s former lawyer pushed Vos to start “reclaiming the electors” and move forward with “either a do over or having a new slate of electors seated that would declare someone else the winner.”

When reached for comment, Eastman said in a statement to ABC News, “By explicit request from Speaker Vos, that meeting was confidential, so I am not able to make any comment.”

Following the meeting, Vos reiterated his position that the 2020 election can’t be decertified. Vos, however, has pushed claims of widespread election fraud and was held in contempt by a judge last month for failing to turn over documents related to a Republican-led investigation he had launched himself in May 2021 into the 2020 election.

His office did not respond to multiple requests for comment from ABC News.

The Wisconsin meeting is just one instance among many in an ongoing effort by Eastman and other Trump allies who, even 15 months into President Joe Biden’s tenure, have continued to push for the results of the 2020 election to be overturned despite no evidence of widespread voter fraud.

During the meeting, Eastman boasted about his involvement in election lawsuits in Texas, Pennsylvania, Georgia and Wisconsin and decried the “attacks” that he and others who push election conspiracies have experienced, calling it “pure evil,” according to a video of the meeting posted by FEC United.

Eastman has said he attended a gathering of Trump supporters at the Willard Hotel on Jan. 5, 2021 and spoke before Trump at the “Save America” rally the next day. Eastman also has said publicly that he, along with other Trump allies, had a so-called “war room” set up at the hotel for several days preceding and on Jan. 6.

Trump has been watching the decertification push closely, saying in a statement last month following the Wisconsin meeting that “Speaker Vos should do the right thing and correct the Crime of the Century—immediately! It is my opinion that other states will be doing this, Wisconsin should lead the way!”

The former president has been in contact with multiple people in Wisconsin working on the effort and has received regular updates from MyPillow CEO Mike Lindell, sources said, who has spread wild and baseless conspiracy theories about the 2020 vote count.

Lindell, who remains a close confidant of the former president, has participated in the Wisconsin pressure campaign with his own team of people including Douglas Frank, who was prominently featured at the My Pillow CEO’s conspiracy-filled “Cyber Symposium” last August, Army Reserve Lt. Colonel Ivan Raiklin, who has also worked closely with former Lt. Gen. Michael Flynn to overturn the 2020 election and Shawn Smith, a Colorado-based activist who has called Lindell an “angel investor” in her organization devoted to “election integrity.”

While Lindell was absent from the March 16 meeting, Frank, Raiklin and Smith attended with Eastman, according to sources familiar with the meeting.

Lindell is currently facing a $1.3 billion lawsuit from Dominion Voting Systems for promoting false claims about their voting machines. He traveled to Mar-a-Lago last Thursday to attend a fundraiser for Arizona gubernatorial candidate Kari Lake that featured the former president.

As Eastman continues his campaign to overturn the election, he has become of greater interest to investigators on the Jan. 6 committee, the panel has publicly indicated.

Last month, a federal judge ruled that Eastman must turn over most of the documents he has been withholding from the committee. The panel has begun receiving and reviewing the documents, according to sources.

The judge, who reviewed the documents privately, said that Trump “more likely than not” committed felony obstruction in the effort to overturn the election.

Eastman and others continue to push to decertify President Joe Biden’s 2020 victory in Wisconsin despite multiple recounts, court filings and audits failing to identify any widespread fraud in the battleground state.

Reviews and audits in other states including Georgia and Arizona, have also failed to substantiate claims about widespread election fraud.