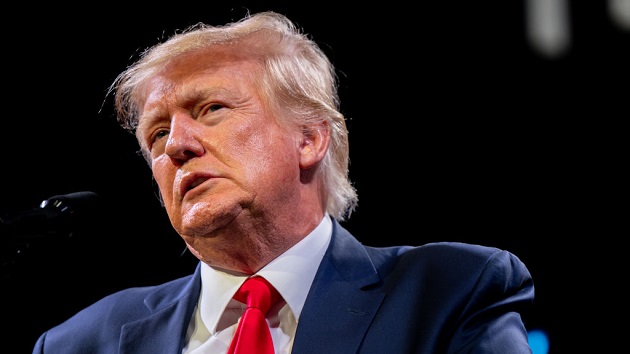 (WASHINGTON) — The power of former President Donald Trump’s endorsement and lasting influence over Republican midterm voters faces its biggest test yet on Tuesday in Georgia, where Trump and his former vice president are on opposite sides in a significant statewide race and where Trump’s “big lie” is effectively on the ballot.

So, for Trump, it’s not just politics — it’s personal.

Incumbent Gov. Brian Kemp and Secretary of State Brad Raffensperger, both Republicans, are defending their offices from challengers — but also from their most vocal critic, Trump, since both men resisted his pressure in 2020 to overturn President Joe Biden’s victory, in a state where three audits confirmed Trump lost by more than 11,000 votes.

Appearing to lay the groundwork for 2024, Trump has endorsed a slate of his loyalists who espouse his “big lie,” including former GOP Sen. David Perdue, relentlessly attacking Kemp in the process as a “sellout” and “coward.” But Trump appears headed for a showdown of his own, as some of his favored candidates, including Perdue, are behind in the polls.

“We have to win,” Trump said in a tele-town hall for Perdue in Georgia Monday night. “We want to win, and we have a governor that’s done the worst job of any governor in probably decades on election integrity.”

Cementing his break from Trump, former Vice President Mike Pence appeared in Kennesaw, Georgia, at the same time on Monday to rally behind Kemp and tout what he called “the Republican Party is the party of the future,” in what could be as an indirect swipe at Trump for continuing to falsely claiming 2020 election fraud.

Trump spokesperson Taylor Budowich, turning the heat on Pence, said in a statement to ABC News that the former vice president is “desperate to chase his lost relevance” and “parachuting in to races, hoping someone is paying attention.”

With Kemp polling better than 50%, according to data compiled by FiveThirtyEight, Pence’s endorsee is expected to not only win renomination but surpass the need for a runoff with Trump’s pick. Polling also suggests Perdue would be a weaker candidate in the general election this fall, where Republicans will face Stacey Abrams, running unopposed for the Democratic gubernatorial nomination — a point Pence hammered.

“I’m here because Brian Kemp is the only candidate in tomorrow’s primary who has already defeated Stacey Abrams, whether she knows it or not,” Pence said Monday, praising Kemp without once mentioning Trump.

Perdue lost a Senate runoff last year to Democratic Sen. Jon Ossoff. Georgia’s other senator, Rev. Sen. Raphael Warnock, will likely defend his seat in the emerging battleground against Herschel Walker, the Georgia college football legend Trump endorsed who is holding steady as the frontrunner in the GOP Senate primary, despite allegations of violent behavior, which Walker has denied.

In a closer, but arguably more consequential race, Trump has directed his ire at Secretary of State Brad Raffensperger, who famously refused in a January 2021 phone call to “find” the former president more votes, and endorsed challenger Rep. Jody Hice, R-Ga., who voted against certifying the 2020 election results.

The winner of the secretary of state race will play a key role in the next presidential election if Georgia again comes down to the wire.

Hice is one of at least 23 election deniers were running for secretary of state in 18 states, according to the States United Action, a nonpartisan advocacy group tracking the uptick in election deniers running for office. Former New Jersey Gov. Christine Todd Whitman, a Republican critic of Trump and co-chair of the group, warned that if Trump were to get his loyalists in place for 2024, it would presumably be much easier to ensure a loss wouldn’t happen again.

So far, more than 850,000 votes have already been cast in Georgia – surpassing the early vote in the 2018 and 2020 elections, despite new election rules inspired by unproven claims of fraud surrounding the 2020 election which Democrats argue have restricted the vote.

“We know that increased turnout has nothing to do with suppression,” Abrams said at a press conference on Tuesday morning. “We know voters want their right to vote to be made real and be held sacrosanct. And so they are showing up.”

Raffensperger, providing reporters with an update on voting in Georgia on Tuesday, declined to answer a question about his race from the state capital, saying “Since we’re in this building, I really have my secretary of state hat on right now.”