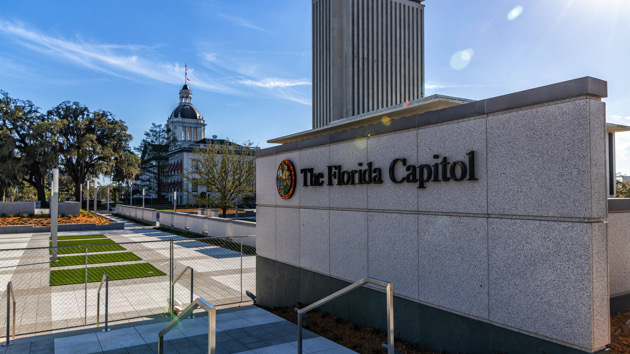 (TALLAHASSEE, Fla.) — Florida’s Republican-controlled House of Representatives voted during a special session Thursday to send two highly controversial bills — one that greenlights Gov. Ron DeSantis’ plan to redraw the state’s 28 districts into a GOP-friendly configuration that splits up Black voters and another that would eliminate Walt Disney World’s special district — to the governor’s desk for signature.

DeSantis’ map, if it survives expected legal challenges, would wipe out any gains by Democrats made during the national redistricting process by adding four Republican-leaning seats and eliminating three highly competitive seats from the previous map. That would leave the state with 18 Republican-leaning and eight Democrat-leaning seats and threaten the already razor-thin majority Democrats hold on the House of Representatives.

It would also split up Black voters by slashing the number of Black-majority districts in half from four to two and overhauling Florida’s 5th District, which stretches in North Florida from Tallahassee to Jacksonville and is represented in Congress by a Black Democrat — Rep. Al Lawson.

The measure that would eliminate Walt Disney World’s status was put forward by Republicans after Disney vowed to help repeal Florida’s highly-controversial Parental Rights in Education Law, dubbed by critics as the “Don’t Say Gay” bill, which limits the teaching of gender identity and sexual orientation in classrooms. The bill would terminate the 25,000-acre Reedy Creek Improvement District that Walt Disney World uses to operate as its own municipality, along with five others.

Florida Democrats’ attempt to block the two votes failed Thursday despite a group taking to the House floor with signs in protest moments before the legislature was to vote around midday.

One of those protestors was Rep. Angie Nixon, who demanded the legislature draw its own map rather than move forward with the one submitted by DeSantis and his advisers.

“Our demands are clear. The legislature needs to draw maps,” said Nixon. “The Republicans in leadership need to come to the Democratic leadership, and we’re going to draw some constitutional maps. Those are our demands and we will not be moved.”

Democrats were able to stave off the special session for an hour, but Republicans eventually returned to the chamber and moved to push both bills successfully, over yells and chanting from dissenters.

“This is how Democracy dies: with a round of applause,” wrote Rep. Anna Eskami on Twitter moments after the legislature approved the redistricting map.

DeSantis, a Republican, originally called the special session after vetoing a GOP-backed version of redistricting maps passed through the Florida House and Senate, claiming that the preservation of districts that lump voters together by race was unconstitutional.

Earlier this month, DeSantis vowed to submit a “race-neutral” map.

“We are not going to have a 200-mile gerrymander that divvies up people based on the color of their skin. That is wrong,” said DeSantis. “That is not the way we’ve governed in the state of Florida and so that will be that. And obviously, that will be litigated.”

On Wednesday, the Republican-led Florida Senate voted to pass the two bills, which are expected to be signed into law by the end of the week.