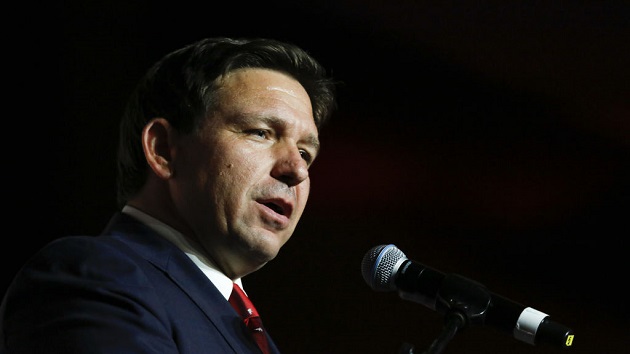 (TALLAHASSEE, Fla.) — Florida Gov. Ron DeSantis has suspended Tampa’s top prosecutor over public statements he made indicating he would not criminalize abortion.

DeSantis announced Thursday that he has suspended Hillsborough County State Attorney Andrew Warren, effective immediately, due to neglect of duty, saying during a press briefing that Warren has “put himself publicly above the law.”

The Republican governor cited a statement Warren signed along with other elected prosecutors nationwide after the U.S. Supreme Court overturned Roe v. Wade, which stated in part that “we stand together in our firm belief that prosecutors have a responsibility to refrain from using limited criminal legal system resources to criminalize personal medical decisions.”

In the wake of the U.S. Supreme Court’s decision in Dobbs v. Jackson Women’s Health Organization, abortions after 15 weeks are barred in Florida, with exceptions if the pregnancy poses a risk to the mother’s life and if the fetus has a fatal anomaly. Doctors who violate the law could face up to five years in prison.

“That is what the legislature has enacted, and it’s not for him to put himself above that and say that he is not going to enforce the laws,” DeSantis said about Warren.

“When you flagrantly violate your oath of office, when you make yourself above the law, you have violated your duty, you have neglected your duty and you are displaying a lack of competence to be able to perform those duties,” DeSantis continued.

The governor named Susan Lopez, a judge he appointed to the Hillsborough County Court, to replace Warren and serve as temporary state attorney for the 13th Judicial Circuit.

Warren, a Democrat, was twice elected to the county seat, most recently in 2020.

DeSantis said the suspension follows a statewide review of state attorneys that narrowed in on Warren’s office. The governor said he did not speak with Warren throughout that process.

Warren called the governor’s actions an “illegal overreach that continues a dangerous pattern by Ron DeSantis of using his office to further his own political ambition.”

“It spits in the face of the voters of Hillsborough County who have twice elected me to serve them, not Ron DeSantis,” he said in a statement.

Warren also defended his work as a state attorney in the face of what he said was a violation of his constituents’ rights.

“In our community, crime is low, our Constitutional rights — including the right to privacy — are being upheld, and the people have the right to elect their own leaders — not have them dictated by an aspiring presidential candidate who has shown time and again he feels accountable to no one,” he said. “Just because the governor violates your rights, it doesn’t mean they don’t exist.”

“In June of 2021, he signed a letter saying that he would not enforce any prohibitions on sex change operations for minors,” DeSantis said.

Florida currently does not have any laws that criminalize gender-affirming health care, which the order suspending Warren for “neglect of duty” acknowledges.

The suspension is in effect pending further action from the governor.

Rep. Charlie Crist, D-Fla., who is running for governor, criticized the suspension of the elected official.

“DeSantis’ decision to suspend him is that of a wannabe dictator who puts partisan politics first. Make no mistake, it’s an attack on Florida’s women,” he said on Twitter.

“Hillsborough State Attorney Andrew Warren is an honest public servant who respects the Florida Constitution [including] our right to privacy which allows girls and women to determine their pathways in life,” she said on Twitter. “He is right to exercise discretion and not prosecute women and doctors.”

Several law enforcement officials spoke during the briefing in support of the suspension, expressing frustration with the prosecutor, who has been vocal on criminal justice reform issues.

Florida Attorney General Ashley Moody said during the briefing that the state constitution requires that DeSantis ensure the state’s laws are being enforced.