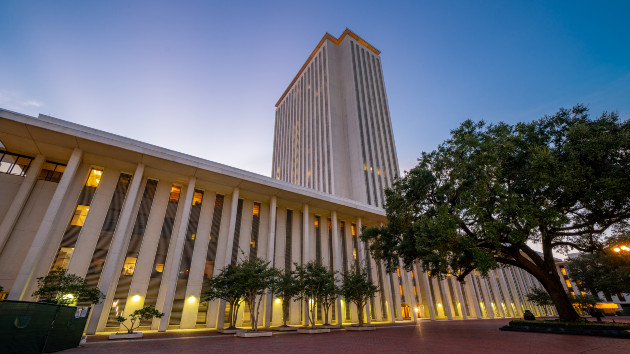 The so-called Fairness in Women’s Sports Act, which was included in a broad education bill, stipulates that girls’ or women’s teams “may not be open to students of the male sex.” It does allow female athletes to play on boys’ or men’s teams. The bill also includes a provision allowing an allegedly impacted student to sue a school that violates the act.

The law, scheduled to go into effect on July 1, applies to public secondary and high schools, public colleges and universities.

So far this year, over 30 states have introduced or passed restrictions on transgender athletes, according to the Human Rights Campaign. Florida is the seventh state — following Arkansas, Alabama, Mississippi, Montana, Tennessee and West Virginia — to enact such legislation, according to the LGBTQ advocacy group. South Dakota Gov. Kristi Noem has also issued similar executive orders.

The Fairness in Women’s Sports Act ensures women and girls aren’t discriminated against in athletic competition. These female athletes deserve a level playing field and are entitled to pursue their dreams in contests that have integrity.https://t.co/S1jMGTnkZm pic.twitter.com/vrBSFFajxB

Supporters argue such bills are meant to protect female athletes from an unfair physiological advantage.

“As a father of two daughters, I want my girls, and every girl in Florida, to compete on an even playing field for the opportunities available to young women in sports,” DeSantis said in a statement Tuesday. “Women have fought for decades to have equal opportunities in athletics, and we have to prevent those opportunities from being eroded as is happening in other states. It’s common sense.”

LGBTQ advocates warn that such bills send a damaging message to vulnerable transgender youth and may open states up to economic consequences.

“Gov. DeSantis and Florida lawmakers are legislating based on a false, discriminatory premise that puts the safety and well-being of transgender children on the line,” Human Rights Coalition President Alphonso David said in a statement. “All Floridians will have to face the consequences of this anti-transgender legislation — including economic harm, expensive taxpayer-funded legal battles, and a tarnished reputation.”

The Human Rights Coalition has already announced its intent to sue Florida over the bill.

BREAKING: On the first day of #Pride, Florida Governor Ron DeSantis has signed into law a bill banning trans kids in the state from playing sports.

We will be filing a lawsuit to block this arbitrary, discriminatory ban. #LetKidsPlay

Nadine Smith, executive director of Equality Florida, said in a statement that the bill will “make Florida more dangerous for our community, for no reason but political gain in an election-driven culture war.”

LGBTQ advocates also decried the timing of the bill’s signing. Sam Brinton, vice president of advocacy and government affairs for The Trevor Project, an LGBTQ suicide prevention organization, said signing the bill on the first day of LGBTQ Pride Month was “unconscionable.”

“This group of young people desperately needs more support, not to be further marginalized and attacked by those in positions of power,” Brinton said in a statement.

Democratic state Rep. Carlos Smith, Florida’s first LGBTQ Latinx legislator, said the bill “contributes to the dangerous stigma that drives the epidemic of violence against and bullying of transgender youth.”

“If GOP lawmakers would have spent half as much time helping Floridians struggling with economic issues as they spent pushing trans kids out of school sports, our state would be much better off,” he said in a statement.

The provisions of the Fairness in Women’s Sports Act stem from legislation that had stalled in the state legislature but which Republican leaders tacked on to an education bill that passed in the last days of the session in late April. The law enacted Tuesday does not include some of the more contentious elements of that original bill, including a provision that would have allowed schools to verify a student’s birth gender via a genital inspection. Instead, under the passed law, students may need to provide a birth certificate that was filed around the time of their birth.

The sponsors of the original bill praised the signing of the Fairness in Women’s Sports Act Tuesday.

“The Fairness in Women’s Sports Act protects opportunities for female athletes to demonstrate their strength, skills, and athletic abilities and to realize the long-term benefits that result from safely participating and competing in sports programs,” Republican state Sen. Kelli Stargel said in a statement.

“The safety and integrity of women’s sports should not be up for debate and this legislation will ensure that both will remain intact,” Republican state Rep. Kaylee Tuck said in a statement.

Florida Education Commissioner Richard Corcoran pushed back against criticism that the bill is discriminatory.

“This issue is an issue of fundamental fairness. Recognizing gender differences is a far cry from discrimination,” he said. “This is especially true in education where major college athletics — and the scholarships that go with it — still delineate by gender.”