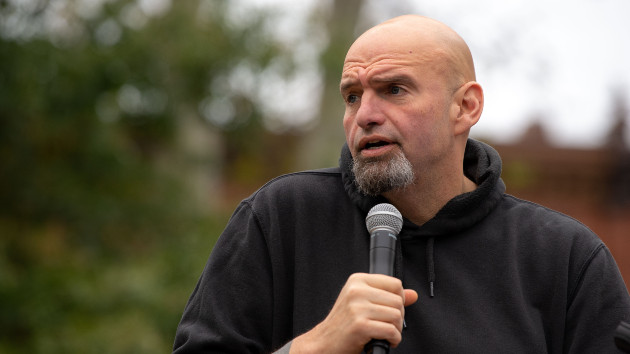 (HARRISBURG, Pa.) — The highly anticipated Pennsylvania Senate debate on Tuesday night was a fast-paced affair focused on policy questions interspersed with — and sometimes interrupted by — the candidates’ attacks, which have defined a key race for who controls Congress’ evenly split upper chamber.

The faceoff also put Democratic Lt. Gov. John Fetterman’s stroke symptoms back in the spotlight as well as what he said was his resilience and recovery from, as he put it, a notable but not disqualifying challenge.

Many eyes were on Fetterman’s health as he took the stage. He spoke haltingly and sometimes inconsistently throughout the debate, even more so than he has at campaign events since returning to the trail in August, three months after his stroke. At times he seemed to struggle to complete his answers.

Two monitors were hung above the heads of the moderators to transcribe both the questions and Republican Mehmet Oz’s answers in real time as an aid for Fetterman’s auditory processing issues, which outside neurologists have said are no indication of cognitive issues for stroke survivors.

Fetterman has worked with a speech therapist; his doctor said last week he was ready for “full duty” in office, though he has declined to release his medical records.

Several times on Tuesday, but not often, there was a pause before Fetterman answered a question as he read the transcription.

Soon after the debate began, he invoked his stroke and the sometimes-mocking criticism he has faced because of it from his rival’s campaign team.

“Let’s talk about the elephant in the room: I had a stroke. He’s never let me forget that,” Fetterman said in his opening remarks, teeing up a line he would repeat over the course of the hour. “It knocked me down, but I’m going to keep coming back up.”

Oz, a former surgeon and popular TV host who described himself as “a living embodiment of the American dream,” did not mention his opponent’s health on stage.

Both candidates were forced to answer for inconsistent views on policies: For example, each was presented with past comments on fracking that contradicted what they’ve said on the issue on the trail.

“I strongly support fracking,” said Oz when asked about comments he made in 2014 arguing against the industry, which employs thousands of Pennsylvanians but draws scrutiny over its environmental effects.

Fetterman, too, was asked by moderators to square his recent public support for fracking with comments he made in 2018 sharply criticizing it.

He and Oz also tried to take advantage when asked about the issues on which they have hinged their candidacies.

“I want to look into the face of every woman in Pennsylvania,” said Fetterman when the debate shifted to abortion access.

“If you believe that the choice of your reproductive freedom belongs to Dr. Oz, then you have a choice,” Fetterman said, contrasting his views with his opponent, who opposes abortion except in cases of rape, incest or the mother’s health and has said he wants it restricted but not criminalized.

“Roe v. Wade, for me, should be the law,” Fetterman added, referring to the national guarantee to abortion rights that was overturned by the Supreme Court this summer.

Fetterman, however, dodged questions on whether he would support any restrictions on abortion, including in later trimesters.

The moderators continually followed up with Oz on whether he would support South Carolina Sen. Lindsey Graham’s proposal to institute a nationwide ban on abortion, with limited exceptions, after 15 weeks.

Oz, as he has done with reporters, declined to answer yes or no, instead saying he was against federal control of the issue and preferred it be left up to the states — to women, their doctors and local politicians, he said.

“Any bill that violates what I said, which is the federal government interfering with a state rule on abortion, I would vote against,” Oz eventually acknowledged.

On crime, meanwhile — an issue he has leveraged as he has closed his yawning polling gap — Oz touted his endorsements by multiple police unions in the state while Fetterman defended himself against soft-on-crime allegations. He claimed Oz, who said he had a lax record granting parole to convicts, had “no experience” with public safety.

Fetterman said that as a mayor of Braddock, Pennsylvania, he had successfully worked to curb gun violence and had a track record of addressing such problems.

“We should be talking about crime and inflation — the issues that are hurting Pennsylvanians,” said Oz, who at multiple points in the debate touted a plan to “unleash” the state’s energy industry to, as he envisioned, raise wages, bolster businesses and help lower high prices.

Oz cited one example of a woman who could no longer afford her groceries given the rising cost of living — a dismaying problem, he said.

Fetterman, he said, was a “radical” who wouldn’t be budget conscious and would raise taxes. On the other hand, he would promote “balance” in Washington.

“I’m a surgeon, not a politician. We take big problems, we focus on them and we fix them,” Oz said late into the debate. “And we do it by uniting, by coming together — not dividing — and by doing that, we get ahead.”

Fetterman said Oz — whom he frequently tried to paint as a liar — wouldn’t have voted for Democrats’ Inflation Reduction Act in Congress, which allows Medicare to negotiate some prescription drug prices, and he invoked Oz’s wealth and relative lack of roots in Pennsylvania. He repeatedly claimed Oz wanted to cut Social Security and Medicare, which Oz said was a baseless allegation. Oz said one of Fetterman’s ads had been pulled for being “dishonest.”

“He has 10 gigantic mansions,” Fetterman said. “We must push back against corporate greed. We must also make sure that we’re also pushing back against price gouging.”

When asked to explain his plan to attack price-gouging corporations, Fetterman did not answer, speaking more broadly about how “inflation is hurting Americans” and how Oz “has never been able to stand up for working families all across America.”

Elsewhere, Fetterman said he supported a law to raise the state minimum wage to $15 an hour, more than double its current rate. Oz said he wanted the minimum wage even higher than that but driven by market forces, not a law, via his plan for the state’s energy companies.

The two candidates split on the value of federal student loan forgiveness — which Fetterman supports — while Oz argued he had a more defined plan for lowering the price of college including offering online instruction.

Tuesday was the only event Fetterman agreed to after Oz’s entreaties and criticism — “this is the only debate I could get you to come to talk to me on,” Oz said on stage — and ahead of it, Fetterman’s campaign attempted to lower expectations for his performance, with two top aides telling reporters in a memo on Monday that debating “isn’t John’s format” and citing Oz’s years on television.

In the minutes right after the faceoff ended Tuesday night, his campaign team mobilized to — in their words — tout how he had performed.

The campaign announced late Tuesday that it planned to run an ad targeting Oz for one of his answers on abortion access, in which he said policy should be democratically decided by states but more specifically involve “a woman, a doctor and local political leaders.”

“We saw tonight a debate that was a complete disaster for John Fetterman,” adviser Barney Keller told reporters. “He wasn’t able to defend any of his radical positions, and it really showed.”

Both candidates will be back on the stump Wednesday, with Election Day in less than two weeks and early voting well underway.

Heading into Tuesday, Polls had narrowed considerably, with FiveThirtyEight’s average now showing Fetterman ahead by less than 3 points, down from nearly 11 points six weeks ago.