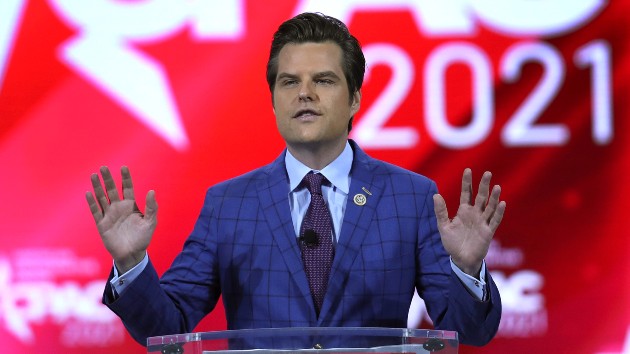 (WASHINGTON) — The federal investigation targeting Republican Rep. Matt Gaetz is specifically looking into whether he and an associate in his home state of Florida provided cash or others things of value to women they had sex with after connecting online, The New York Times first reported Thursday evening and a source familiar with the matter confirmed to ABC News.

The details of the investigation were first reported by The New York Times, two days after the paper revealed that an investigation was underway. The disclosure has sent shockwaves through Republican circles, particularly among close associates of former President Donald Trump, who considered Gaetz a staunch ally and loyal friend.

Gaetz’s office did not respond to a request for comment, but earlier this week Gaetz insisted on Fox News that he never “had a relationship with a 17-year-old,” calling such allegations “totally false.”

According to the Times, investigators believe Greenberg met women through certain websites and introduced some of them to Gaetz. As recently as 2019 and 2020, Gaetz and Greenberg told women to meet them at hotels in Florida, laying out how much they were willing to pay beforehand, the newspaper said, adding that party drugs may have also been used by Gaetz and others at times.

A lawyer for Greenberg did not respond to ABC News’ request for comment. Greenberg served a controversial stint as Seminole County tax collector until he resigned last summer following his arrest by federal authorities.

Prior to joining Congress, Gaetz was a member of the Florida House of Representatives when his father was also a member of the Florida Senate. Sources told ABC News the two were often referred to as “Daddy Gaetz and Baby Gaetz.” Sources said some women referred to him as “Creepy Gaetz” because they allegedly found themselves made uncomfortable by the junior lawmaker.

Sources said Gaetz was part of a group of young male lawmakers who created a “game” to score their female sexual conquests, which granted “points” for various targets such as interns, staffers or other female colleagues in the state House. One of the targets of the scoring system was a group the lawmakers had heard were “virgins,” according to a source. The scoring system by male Florida lawmakers was previously reported by the Miami Herald.

One source said Gaetz was often spotted trying to pick up young women at 101 Restaurant, a once-popular watering hole in Tallahassee for some lawmakers and students from nearby Florida State University.

Gaetz’s office did not respond to a request for comment.

During an interview on Fox News, Gaetz claimed he was being extorted over the investigation and claimed that someone had alleged there were “pictures of me with child prostitutes,” which he said was “obviously false.”

“There will be no such pictures because no such thing happened. But really on March 16 was when this got going from the extortion standpoint,” Gaetz said.

Gaetz has previously sparked controversy over repeatedly commenting on Rep. Alexandria Ocasio-Cortez’s appearance, calling the New York congresswoman “attractive” multiple times and once referring to her as the “attractive lady from Queens.”

Gaetz developed a reputation in the U.S. House of Representatives for often bragging to colleagues about his relationships with women, sources told ABC News.

Upon his arrival to Washington, sources said Gaetz was often seen with young women at various social events, including at the Trump Hotel on Pennsylvania Avenue.

Gaetz previously told Axios, “The allegations of sexual misconduct against me are false.” When asked what the DOJ probe could be about, he added, “I have definitely, in my single days, provided for women I’ve dated. You know, I’ve paid for flights, for hotel rooms. I’ve been, you know, generous as a partner. I think someone is trying to make that look criminal when it is not.”