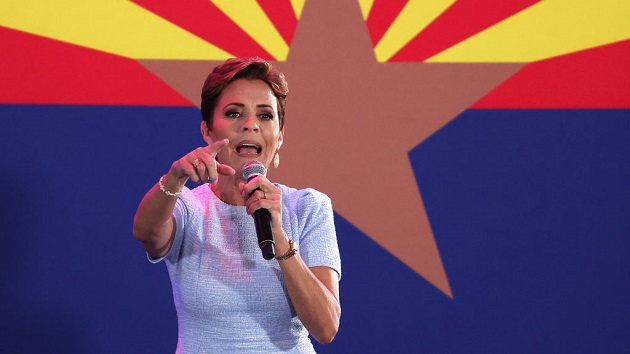 “Yesterday, a member of the Kari Lake staff opened an envelope delivered to our campaign office that contained suspicious white powder. It was one of two envelopes that were confiscated by law enforcement and sent to professionals at Quantico for examination, and we are awaiting details,” Lake campaign spokesperson Colton Duncan told ABC News in a statement. He added that the staff member is currently under medical supervision.

“Officers responded to a found property call at an office building near 40th St. and Camelback Road,” Sgt. Phil Krynsky of the Phoenix Police Department told ABC News on Sunday. “When officers arrived, they learned there were suspicious items located inside the mail. Additional resources responded to collect the items and secure the area. There have been no reports of injury and the investigation remains active.”

Krynsky told ABC News the additional resources who responded to the incident with Phoenix PD’s were their hazmat team, Bomb Squad and the FBI.

“Early this morning, Sunday, November 6th, the FBI, along with our local law enforcement partners, responded to a report of suspicious letters at an office building near 40th Street and Camelback Road,” the FBI National Press Office said in a statement. “No further information will be released at this time.”

Duncan, noting that Lake’s campaign headquarters remains under active investigation – and therefore shut for staffers’ use just two days out from the 2022 midterm elections – said: “We look forward to law enforcement completing their investigation as quickly as possible.”

“Rest assured, we are taking this security threat incredibly seriously and we are thankful for the Phoenix PD, FBI, first responders, bomb squad, and hazmat crews that responded to this incident,” he added. “In the meantime, know that our resolve has never been higher and we cannot be intimidated. We continue to push full speed ahead to win this election on Tuesday.”

The incident occurred less than a week after a man allegedly broke into Lake’s opponent, Democratic candidate for governor Katie Hobbs’ campaign headquarters.

A tweet from Lake campaign’s War Room on Sunday following the incident with the suspicious substance, questioned if the press would “immediately accuse our opponent of being responsible for this like they did to us over@katiehobbsWaterGate?”

Hobbs —- who is also Arizona’s current secretary of state— condemned Lake’s rhetoric in a statement confirming the break-in, which ultimately had no ties to the Lake campaign.

“The reported incident at Kari Lake’s campaign office is incredibly concerning and I am thankful that she and her staff were not harmed,” Hobbs said in a statement to ABC News on Sunday. “Political violence, threats, or intimidation have no place in our democracy. I strongly condemn this threatening behavior directed at Lake and her staff.”

Lake was at a rally with the GOP ticket Saturday evening after making bus tour stops earlier in the day. On stage there, she mentioned previously having her car tires slashed.

“You know that we crisscross the state. We’ve gone through tires, so many tires. We’ve had to change our tires on the car. We’ve actually had our tire slashed a few times, probably by, you know, people who’ve been brainwashed by the left. We have had all kinds of crazy things happen on the campaign trail,” she said.