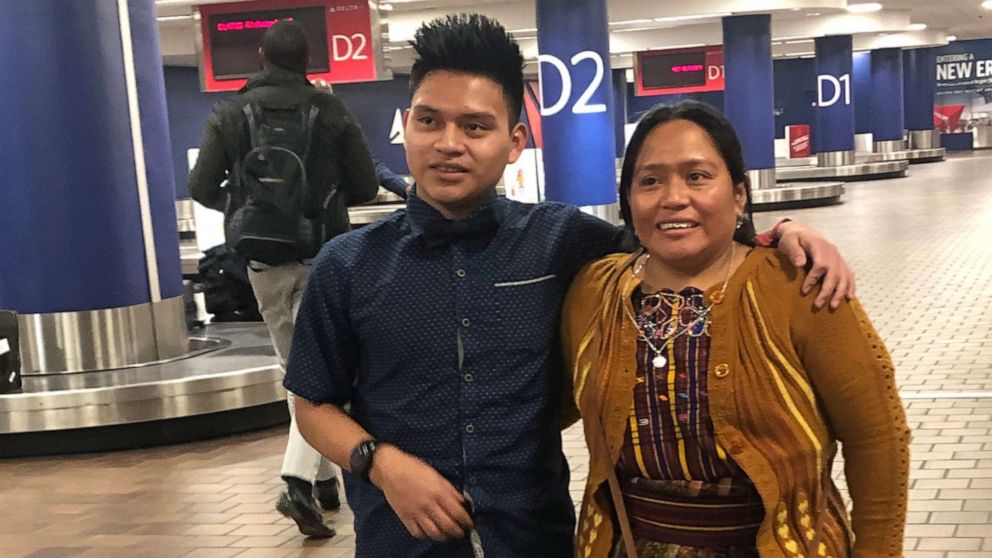 (NEW YORK) — Leticia works at a bakery helping to prepare the pastries that hungry New Yorkers order with their coffee in the morning. At first glance, she’s like any other person in the city. But in 2017, she fled Guatemala with her son Yovany and made her way toward the border in Texas.

“At the moment we crossed, we were happy. We thought our lives were saved, that all the danger was behind us,” she said in Spanish in an interview with ABC News’ Zachary Kiesch. “We couldn’t imagine that a greater pain, a stronger pain, was ahead of us.”

Once they crossed, she and her son were detained by Border Patrol agents and quickly separated as they tried to submit an asylum claim. Leticia, whose last name is being withheld for privacy, was deported and Yovany was placed in foster care. They did not see each other for over two years.

They were among the first migrant families subjected to a pilot program for what later became the Trump administration’s “zero-tolerance” policy.

Leticia and Yovany could be one of the families qualifying for compensation if the Biden administration decides to make settlement payments to migrants who were separated from their children by the Trump administration.

Now reunited in the United States, mother and son continue to live in fear of being separated again while their asylum case is pending.

“It was a pain that I still carry with me. It’s still hurting me,” Yovany said in Spanish. “I continue living with that fear that I will be separated from her again.”

The potential settlement payments, first reported by The Wall Street Journal, are part of an ongoing federal lawsuit filed by the American Civil Liberties Union seeking damages for separated families. Earlier this month, President Joe Biden dismissed reports that payments of up to $450,000 were being discussed, but expressed his support for some kind of compensation.

In 2019, a federal judge ruled that Leticia’s deportation had been unlawful because she did not voluntarily accept deportation and sign away her parental rights. Immigration officials did not provide her an interpreter or explain that they were separating her from Yovany.

“It was totally in English. I didn’t know what I was signing,” Leticia said. “Even today I still don’t know what it is I signed.”

The Senate Judiciary Committee questioned Department of Homeland Security Secretary Alejandro Mayorkas this week, with support for the reported settlements appearing to fall along party lines.

ACLU lawyer Lee Gelernt said the reports about settlements have been politicized and that there is no time frame on when a decision will be made in regards to the amount of money families would receive and who would be eligible.

“This is not about whether we all agree on macro-immigration policy. This is whether the United States is going to make little children pawns in this political fight,” Gelernt said. “These families, according to all of the medical experts, have suffered severe trauma — literally being pulled away.”

Leticia said she draws strength from her Indigenous roots, but her courage and faith were tested during those long months when she didn’t know where her son was located. Despite the close bond they continue to share, she said there was some initial distrust when they were finally reunited.

“When I saw him, I noticed there was a feeling of ‘Why would you leave me?"” she told ABC News. “He didn’t tell me with his words but as a mother, I knew.”

Fear of abandonment, depression and anxiety are just a few of the challenges families like Leticia’s face when they’re finally reunited.

“Money is not everything in the world,” Leticia said of the possible payments. “It won’t return our happiness, it won’t return our health. But it can help start to remediate the trauma and the pain they caused us when they violated our human rights.”

The Asylum Seeker Advocacy Project has been helping support her and Yovany while they wait for their asylum case to be heard.

“Reunification is truly only the first step that the government must take for these families. After they reunify, these families have to navigate a complex immigration system that is stacked against them in every way,” said Leidy Pérez-Davis, policy director at the Asylum Seeker Advocacy Project.

The Biden administration’s reunification task force has found that more than 3,900 children were separated under by the “zero-tolerance” policy. Gelernt estimated that there are still over 1,000 families that have yet to be reunited and at least 270 that have not even been located.

“I hope this serves as an example for future governments to never repeat the same damage and trauma they’ve caused,” said Leticia.