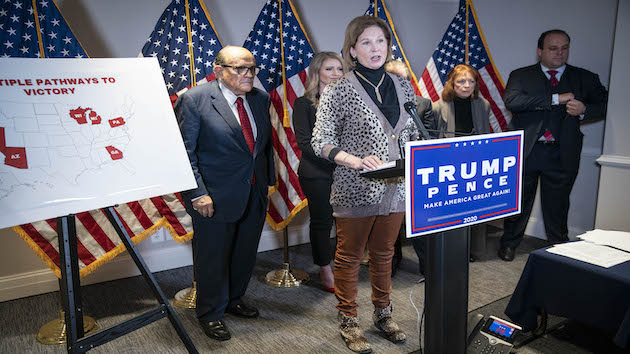 Sarah Silbiger for The Washington Post via Getty Images

(WASHINGTON) — Former Trump attorney Sidney Powell and her legal team clashed repeatedly with a federal judge Monday during a hearing to determine if sanctions are warranted against her and other attorneys who filed a lawsuit in Michigan based on false claims of election fraud in an unsuccessful attempt to overturn the results of the 2020 election.

Michigan Gov. Gretchen Whitmer, Secretary of State Jocelyn Benson and the City of Detroit have requested that Federal Judge Linda V. Parker sanction Powell, attorney Lin Wood, and other members of the legal team that were involved in the efforts to have Michigan’s presidential election returns decertified due to unsubstantiated claims of voting irregularities.

Monday’s nearly six-hour hearing, at which Powell appeared virtually, quickly spiraled into chaos as attorneys from both sides shouted accusations at each other about the merits of the lawsuit at hand, which sought to block certification of the election and was subsequently denied.

David Fink, a lawyer for the city of Detroit, called the lawsuit “an embarrassment to the legal profession.”

“It was sloppy, it was unreadable, it was mocked in the public … it never should have been filed,” Fink said. “These lawyers should be punished for their behavior.”

Powell, who served on then-President Donald Trump’s legal team before being removed for pushing outlandish conspiracy theories, vigorously defended the lawsuit and the diligence that went into producing it, saying she “would file these same complaints again.”

Her statements came three months after she filed a motion to dismiss a defamation lawsuit filed by voting machine company Dominion Voting Systems, arguing that “no reasonable person” should have believed her election theories were “truly statements of fact.”

The effort, if successful, would mark the first financial penalty against those who sought to challenge the 2020 election in court based on false claims of election fraud or other election misconduct. In all, Trump and his supporters filed over 50 lawsuits across the country.

Judge Parker poured over one of those suits during the hearing, peppering Powell and her team with dozens of questions in an effort to determine if sanctions are warranted. The judge expressed skepticism about the legal basis for Powell’s suit, the various claims of fraud, and the evidence submitted to support them.

“The court is concerned these affidavits were submitted in bad faith,” Parker said of the suit, which was filed in in November and was dismissed by a judge after it was found to be riddled with factual errors and inaccuracies.

A number of the affidavits submitted to support allegations of fraud were debunked by local election officials, and questions were raised about credentials of a number of the expert witnesses used in the suit. The lawsuit’s anonymous military intelligence expert, for example, was reportedly a Dallas-based IT consultant who never even worked in military intelligence, according to a Washington Post report.

“How can any of you as officers of the court present this type of affidavit?” Parker asked at one point about a separate affidavit. “I don’t think I’ve ever seen an affidavit with more leaps. This is pure speculation.”

“We did a ton of due diligence,” said Howard Kleinhendler, a lawyer on the Powell team. “We did not submit falsehoods,” said Julia Haller, another attorney on the team.

Several attorneys, however, attempted to distance themselves from the suit. Wood, a staunch supporter of the president who filed multiple suits in the wake of the 2020 election, said he had “nothing to do” with the suit at issue in the hearing.

“My name was placed on there, but I had no involvement whatsoever,” he told the judge, claiming that he had offered general assistance to Powell but was not involved in this suit.

Another attorney said the team had spent no more than five hours total on the suit.

Parker did not issue a decision, or give an expected timeline for one.