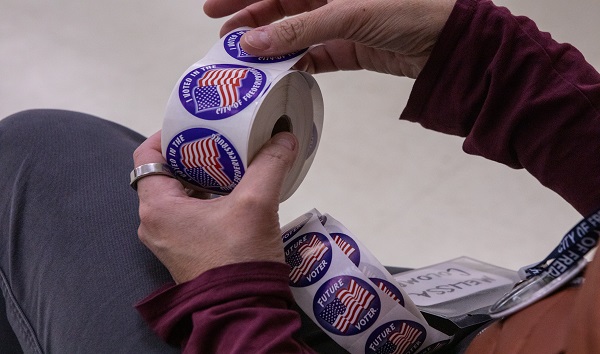 (NEW YORK) — Voters headed to the polls Tuesday for the midterm elections that will determine which party holds the Senate and House of Representatives and could significantly impact President Joe Biden’s agenda for the final two years of his first term in the White House.

According to a recent ABC/Post poll, 80% of likely voters said the economy was their top issue in their vote for Congress and 77% said the same about inflation.

Even after the polls close and votes are counted Tuesday night, it could be days or even a week before final midterm election results are known in every state, according to election experts and officials.

Here is how the news developed. All times Eastern:

In the governor’s race, Hispanics overall broke for incumbent Gov. Ron DeSantis by 15 points, 57% to 42%, compared with a 10-point lead for Democrat Andrew Gillum in 2018.

The shift was primarily among non-Cuban Hispanics. This group went from a lead of 30 points for the Democratic candidate in the last gubernatorial election, 64-34 Gillum to DeSantis, to a 5-point lead for DeSantis this year, 52-47%.

Among Cuban Hispanics, DeSantis won by 37 points over Democratic candidate Charlie Crist, 68% to 31%, compared with a 32-point win in this group in 2018.

According to exit poll results, Ohio suburban voters prefer Republican JD Vance over Democratic Rep. Time Ryan in the race for Senate, at 56% to 43%.

In the traditionally red state, 36% of voters are conservatives while 21% are liberals.

Hassan won 59% of the female vote and won among 54% of independents and 63% of moderates.

She also won overwhelmingly among voters who said abortion was their top issue, winning 86%.

Thirty-six percent of New Hampshire voters said inflation was their top issue, but abortion came in as a close second with 35% saying the same.

Nov 08, 10:59 PM EST
49% of Pennsylvania voters think Fetterman is in good enough health to represent state, majority say Oz has not lived in state long enough to represent it

In exit poll results, 49% of Pennsylvania voters say Democrat John Fetterman is in good enough health to represent the state effectively in the U.S. Senate.

Questions about Fetterman’s health have swirled since he had a stroke in May.

Fetterman has focused on his opponent’s newcomer status in Pennsylvania and his longtime New Jersey residency. Overwhelmingly, 56% of voters say Republican Mehmet Oz has not lived in Pennsylvania long enough to represent the state, according to preliminary exit poll results.

Over two-thirds of voters most apt to say they do not think President Joe Biden won the 2020 presidential election were Republicans, according to preliminary exit poll results.

Suburban women are divided 52% to 46%, on Democrat John Fetterman to Republican Mehmet Oz, according to preliminary results.

Meanwhile, 50% of Pennsylvania voters think Oz’s views are too extreme, while 45% say the same of Fetterman.

According to preliminary polling results, nearly half of Michigan voters say abortion is the most important issue driving their vote.

More than half of Michigan voters said abortion should be legal in all or most cases.

Michigan voters have an abortion-related question on the ballot as a legal battle over an abortion ban on the books continues.

Slightly more than a quarter of voters said inflation was the biggest issue.

Just over half of suburban women prefer Democratic House candidates over Republican candidates, according to preliminary exit poll results.

Over two-thirds of voters focused on inflation as the main issue are favoring Republican House candidates while just over three-fourths of voters who focused on abortion favor Democrats, according to preliminary exit poll results.

According to preliminary exit poll results, about half of voters say they would rather see the Republican Party control the U.S. House of Representatives, while just under half say the same about Democrats.

Independents, often swing voters, are almost equally divided between Democrats and Republicans when it comes to control of the House, barely leaning toward Democrats. In 2020, independents backed Democratic House candidates by a 9 point margin at 53% to 44%.

Over three-fourths of voters who say they have gotten worse off financially in the past two years are favoring Republicans. A stark turnaround from 2020 and 2018, when this group backed Democrats by about 60-point margins, and a return to GOP advantages among worse-off voters in 2016 and 2014.

Republicans have widened their lead when it comes to trust to handle inflation with more than half of voters saying they favor the GOP over Democrats, according to preliminary exit poll results.

Republican Herschel Walker, who’s been embroiled in a personal scandal, is seen as showing good judgment by just about a third of Georgia voters in preliminary results.

But, nearly half said Warnock has views that are too extreme, with less than half saying the same of Walker.

Kemp, however, has a wide lead over Abrams among voters who cite inflation as the most important issue when it comes to their vote.