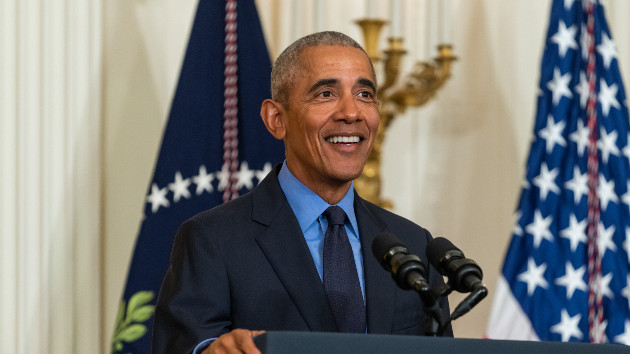 (WASHINGTON) — Former President Barack Obama, still one of the most popular figures in the Democratic Party, is set to hit the campaign trail in the final stretch to the midterm elections.

Here is where Obama is scheduled to appear in the next few weeks:

Obama will appear in Atlanta on Oct. 28, visiting a state that could decide which party controls the Senate and is also hosting a competitive gubernatorial election.

He will rally for freshman Sen. Raphael Warnock, who is running for a full term of his own after winning a special election last year, and Stacey Abrams, the prominent voting rights activist and former lawmaker again trying to unseat Republican Gov. Brain Kemp after he narrowly beat her in 2018.

Warnock is running neck-and-neck with former football star Herschel Walker, though he has a narrow edge in the most recent surveys, according to FiveThirtyEight, including in those taken since Walker, a staunch abortion opponent, denied a report that he paid for an ex-girlfriend’s abortion in 2009.

Abrams, for her part, is widely viewed as the underdog to Kemp though she is seeking to mobilize voters.

Democrats are hoping to keep their momentum going in the Peach State after a banner year in 2020, when President Joe Biden narrowly won the state and Warnock and Jon Ossoff ended up eking out a pair of Senate wins — the first such victories for Democrats there in decades.

Obama will rally in Detroit on Oct. 29, appearing with Gov. Gretchen Whitmer and other Democrats.

Whitmer is running for reelection against conservative commentator Tudor Dixon.

The governor, who has focused her campaign messaging around a blend of pocketbook and social issues, is widely viewed as the favorite and leads Dixon in FiveThirtyEight’s polling average. A win there would offer a promising sign for Democrats in a tight presidential swing state.

“The event will focus on the stakes of the race as access to abortion, voting rights and public education are at risk in Michigan,” Obama’s office said in a statement.

Obama will also rally in Milwaukee on Oct. 29 with Wisconsin Gov. Tony Evers, who is up for reelection, and Lt. Gov. Mandela Barnes, who is running to oust Republican Sen. Ron Johnson,

Wisconsin is a crucial state for Democrats this year, with Johnson as one of the most vulnerable Republican senators up for reelection.

Barnes has begun narrowly trailing Johnson in voter surveys after facing an avalanche of attack ads painting him as soft on crime, while Evers is locked in a close race with businessman Tim Michels.

Flipping Johnson’s seat would ease Democrats’ path to keeping Senate control, where they hold a bare majority, while the victor in the gubernatorial race could help decide key policies on issues like abortion access and voting rights in a state where Republicans control both chambers of the state legislature.