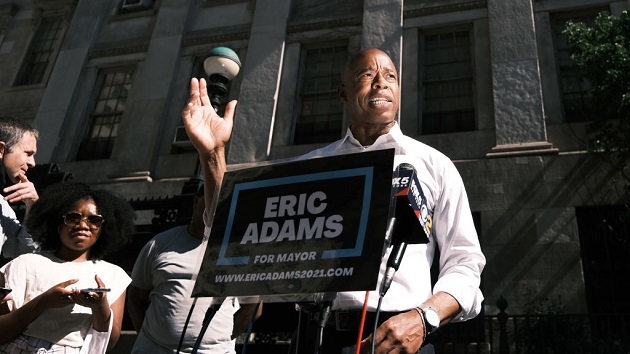 (NEW YORK)– Brooklyn Borough President Eric Adams maintains a lead in the preliminary vote count for New York City’s Democratic primary for mayor, but preliminary results released by the city on Tuesday suggest a closer-than-expected race that could swing in a different direction when all votes are counted.

“We’ve been saying from the start this was going to be close,” Lindsey Green, a spokesperson for Garcia, told ABC News. “This new information obviously supports that. We feel confident, but there are obviously over 120,000 absentee votes still to be counted and we are going to have patience and wait for every vote to be counted.”

The new report, which isn’t a final tabulation, doesn’t include absentee and affidavit ballots — only in-person votes. The Board of Elections said over 130,000 absentee ballots across parties were returned as of June 28, while over 221,000 had been sent out.

According to New York City Board of Elections officials, the final results from New York City’s first ranked-choice-voting primary, a hotly contested Democratic contest, may not be tabulated until July.

In ranked-choice voting, voters can list up to five candidates. If no candidate gets at more than 50% in the first round, voting tabulation continues in additional rounds. The candidate who places last in each round is eliminated, and those votes are shifted to the voter’s next-choice candidate.

The unofficial counts released on Tuesday shows Eric Adams on track to win the primary with 51.1% of the vote, with over 368,000 votes; while Garcia ends with 48.9% and over 352,000 votes. In the penultimate round of ranked-choice voting listed on the report, Wiley holds 29.3% of the vote while Garcia holds 29.8%, after all other candidates have been eliminated. But no one can be formally eliminated at this stage, and the vote counts and percentages could changed based on absentee ballots.

“We know that this is going to be layers,” Adams said on election night. “But there’s something else we know that New York City said: ‘Our first choice is Eric Adams."”

During a press conference on June 23, Wiley reiterated her support for ranked-choice voting and said, “We now must count every vote. Every single person who showed up at these polls needs to know their vote counts.”

In a statement released Tuesday, Wiley added, in part: “Democracy, as John Lewis said, is an act. And New York City residents engaged in one of the central acts of democracy! They voted. And they acted when they chose overwhelmingly to adopt ranked-choice voting.”

Garcia wrote on Twitter on Tuesday that the new results “give us a snapshot — a fuller but still incomplete picture of the final results… Let’s be patient. Democracy is worth it.”

Today @BOENYC is set to release the first, preliminary round of RCV results. This will give us a snapshot – a fuller but still incomplete picture of the final results. This race isn’t over & there are still 124K+ absentee ballots to count. Let’s be patient. Democracy is worth it.

Adams campaigned on his experience as a former NYPD police officer and called for both a crackdown on crime as well as police reform.

Wiley has called for reallocating NYPD funds to policing alternatives, while Garcia has called for more moderate reforms to change NYPD culture and operations. Crime and policing have been leading issues in the election amid both an uptick in crime and calls for police reform.

The eventual winner of the Democratic primary will face Republican candidate and Guardian Angels founder Curtis Sliwa, who led the Republican primary with over 50% of the vote.

How feasible are Republicans’ ‘pro-family’ plans in wake of new abortion restrictions?