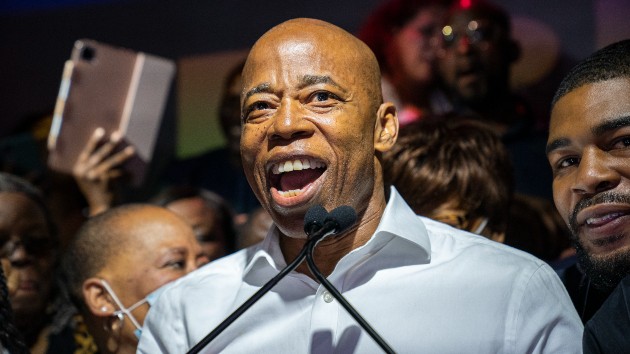 “We know that this is going to be layers. This is the first early voting count,” Adams said.

He later added, “But there’s something else we know that New York City said, ‘Our first choice is Eric Adams.’”

Adams, former Sanitation Commissioner Kathryn Garcia and former counsel to Mayor Bill de Blasio Maya Wiley hold top spots in the pack of 13 Democratic mayoral hopefuls who appeared on the Democratic ballot. Ranked choice votes, which add a layer of unpredictability to the race, have yet to be tabulated and the wait for a winner is only beginning.

New York City Board of Elections officials have long warned that the first tabulation of ranked choice voting would begin a week after election night and final results may not be available until July.

Often, the first-round winner in a ranked choice race ultimately wins the election. But according to FairVote, a nonpartisan group that advocates election reform, a come-from-behind win is still possible.

“One tricky aspect of this is that the totals we’re seeing tonight won’t include absentee ballots, and there were quite a few sent out, potentially as much as a fourth of all votes cast in this contest. So we’re just going to need to be patient, I think, although Adams’ advantage is clear,” FairVote President and CEO Rob Richie told ABC News.

According to the city’s Board of Elections, more than 221,000 absentee ballots were sent out and only about 90,000 had been returned on primary day.

This is the first big test of ranked choice voting in the Big Apple. New Yorkers who cast their ballots before polls closed listed up to five choices for the city’s chief executive instead of checking only one box. Because no one candidate got more than 50% of the votes, as expected, ranked choice votes have come into play.

Ranked choice vote counts take place in rounds via software approved by the New York State Board of Elections, with the last-place candidate eliminated in each round. It allows supporters of losing candidates to shift their support to their other choices. Rounds continue until a candidate has more than 50% of the vote.

At the center of the debate over who should be the next mayor to lead the nation’s largest city is the uptick in crime and policing. Progressive candidates, including Wiley, have called for reallocating funds away from the New York City Police Department. Relatively moderate candidates, such as Adams, stated their opposition to the notion of defunding the police and have instead called for more investment in law enforcement.

Guardian Angels Founder Curtis Sliwa came out on top of the Republican mayoral primary campaigning as a tough-on-crime candidate.

“I am not going to be the next mayor of New York City based upon the numbers that have come in,” Yang said. “Tonight, I am conceding this race, though we’re not sure, ultimately who the next mayor is going to be. But whoever that person is, I will be very happy to work with them.”

If Adams maintains his lead in the Democratic primary, he could be the second Black mayor of New York City.