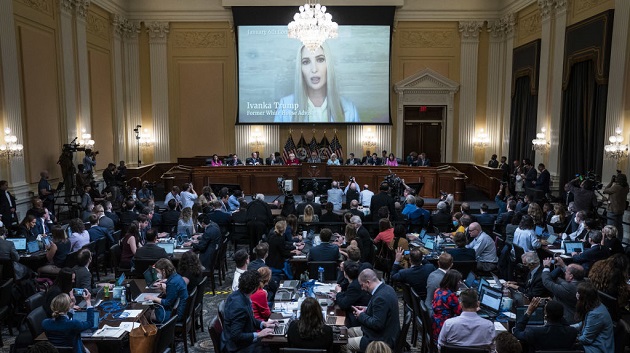 (WASHINGTON) — After nearly two hours on Monday, Chairman Bennie Thompson gaveled out the House Jan. 6 committee’s second hearing this month to publicly unveil the findings of an 11-month-long investigation which found, the committee said, that former President Donald Trump was at the center of a “multistep conspiracy aimed at overturning the presidential election.”

Monday’s hearing used firsthand accounts from Trump’s inner circle — including his daughter, son-in-law, former campaign manager and former attorney general — to focus on how he pushed the “big lie” of a stolen 2020 race to millions of supporters even though almost all of his advisers — except, most notably, Rudy Giuliani — told him that he had lost to Joe Biden.

The committee said Trump went on to fundraise $250 million off of his baseless claim, which committee members cast as key in compelling people to storm the Capitol in the deadly insurrection last year.

“We will tell the story of how Donald Trump lost an election and knew he lost an election and, as a result of his loss, decided to wage an attack on our democracy — an attack on the American people by trying to rob you of your voice in our democracy,” Thompson said at Monday’s hearing. “And in doing so, lit the fuse that led to horrific violence on Jan. 6, when a mob of his supporters stormed the Capitol, sent by Donald Trump to stop the transfer of power.”

In live and taped testimony, both former Trump administration officials and GOP state election officials recounted telling his White House and his campaign that there was no widespread fraud — but to no avail.

This was the hearing’s central theme: Trump knew his extraordinary efforts to undercut the 2020 election had no merit, but he kept pushing well beyond the limits of normal challenges to the results. Trump, for his part, continues to call the investigation politically motivated and says he did nothing wrong.

Wyoming Republican Liz Cheney, the committee’s vice chair, outlined on Monday how Trump was urged by some aides not to declare victory on election night and was informed that “many more” Democratic voters would vote by mail, meaning their votes would be coming in more slowly and the results were not yet final — but Trump “rejected the advice of his campaign experts on election night, and instead followed the course recommended by an apparently inebriated Rudy Giuliani,” Cheney said.

Here are some other key takeaways from the hearing.

Using taped testimony from at least 10 individuals, the committee showed how Trump’s closest advisers repeatedly told their boss in the weeks after the election that there was no evidence of widespread fraud, illustrating — according to the committee’s presentation — how Trump knew the truth but ignored it.

At the top of the hearing, the committee played a video compilation of witnesses describing the scene at the White House on election night in 2020 after Fox News called Arizona for Biden — including interviews with Trump’s former campaign manager Bill Stepien (who had to unexpectedly back out of testifying live on Monday after his wife went into labor), as well as Trump’s daughter Ivanka Trump and son-in-law Jared Kushner.

Ivanka Trump told the committee in previously taped video that she didn’t have a “firm view” of what her dad should have said the night of the election, while his campaign spokesman Jason Miller told investigators that a “definitely intoxicated” Giuliani was pushing for Trump to declare victory. (Giuliani has repeatedly dismissed claims that he has a drinking problem or that alcohol adversely affects his behavior.)

“Effectively, Mayor Giuliani was saying we won it,” Miller said in taped testimony of what happened on election night, “and essentially that anyone who didn’t agree to that was being weak.”

Asked during his own pre-recorded testimony if he ever shared his view of Giuliani with the president, and what he told Trump, Kushner recalled telling him, “Basically, not the approach I would take if I were you.”

Asked how Trump reacted, Kushner recalled the president saying, “I have confidence in Rudy.”

In other notable testimony, Trump White House lawyer Eric Herschmann reiterated that the Trump-backed conspiracy about Dominion voting machines in the weeks after the election was not persuasive. “I never saw any evidence whatsoever to sustain those allegations,” he said after Cheney characterized the allegations as “far-flung conspiracies with deceased Venezuelan communists allegedly pulling the strings.”

But Trump’s former Attorney General Bill Barr offered some of the most striking testimony on Monday, appearing to revel in the chance to tell his side in taped testimony — though publicly he has walked a fine line: broadly supporting the president while calling out his specific election fraud claims as false.

According to video excerpts of Barr’s testimony to the committee that were played Monday, he described a meeting with Trump in late November where he told Trump the president’s allegations of election wrongdoing weren’t holding up. Barr spoke bluntly to House investigators, calling Trump’s statements “bogus and silly,” “idiotic,” “disturbing” and “complete nonsense,” among other characterizations in his testimony.

“I said,” Barr recalled, “the Department [of Justice] doesn’t take sides in elections, and the department is not an extension of your legal team. And our role is to investigate fraud, and we’ll look at something if it’s specific, credible and could’ve affected the outcome of the election. And we’re doing that, and they’re just not meritorious. They’re not panning out.” (As Barr noted, he told DOJ attorneys in the days after the 2020 election to probe possible fraud — an unusual move that Biden’s team at the time argued was meant to undercut his victory.)

After his late-November 2020 meeting, Barr said, Trump’s chief of staff Mark Meadows told him that Trump “was becoming more realistic” and Kushner said, ‘We’re working on this.” But Trump did not back down.

The committee then played video of Barr recalling a December meeting with Trump, with Barr recalling that “the president was as mad as I’ve ever seen him, and he was trying to control himself.”

“Trump said, ‘You didn’t have to say this, you must’ve said this because you hate Trump,"” Barr remembered, going on to say he was concerned for Trump’s state of mind.

“He’s become detached from reality if he really believes this stuff,” Barr said he was thinking. “There was never an indication in interest in what the actual facts were.”

Barr also mentioned — and laughed at — the movie “2,000 Mules,” a conspiracy-laden film by conservative activist Dinesh D’Souza that Trump has encouraged supporters to watch.

“I felt that before the election, it was possible to talk sense to the president. And while you sometimes had to engage in, you know, a big wrestling match with him, that it was possible to keep things on track. But I felt that after the election he didn’t seem to be listening,” Barr told the committee. “And I didn’t think it was — you know — that I was inclined not to stay around if he wasn’t listening to advice from me or the Cabinet secretaries.”

Lofgren said one side was helmed by Stepien, who was then Trump’s campaign manager, and the other was organized around Giuliani, a former New York City mayor, longtime Trump confidant and one of his personal attorneys.

In his pre-taped testimony, Stepien told the committee that Trump’s growing unhappiness after Election Day “paved the way” for Giuliani, attorney Sidney Powell and others to become more influential. Giuliani and Powell took the lead in spreading false claims about fraud and litigating the issue in court.

“We called them my team and Rudy’s team,” Stepien said. “I didn’t mind being categorized as ‘Team Normal’ as reporters started to do at that point in time.”

Stepien added that he didn’t think what was happening after the election was “honest or professional,” so he stepped away. Herschmann, the former Trump White House lawyer, described the arguments being made by the Giuliani camp as “nuts.”

Stepien and Jason Miller, another top campaign adviser, both testified that Giuliani was the one pressuring Trump to claim victory on election night, when the vote tally was nowhere near complete.

Miller claimed Giuliani was “definitely intoxicated” when he made that suggestion.

The committee also outlined, according to their investigation, how little of the $250 million raised by Trump for his court battles after the 2020 race actually went to his post-election defense, with Lofgren calling the “big lie” a “big rip-off.”

“The Trump campaign used these false claims of election fraud to raise hundreds of millions of dollars from supporters who were told their donations were for the legal fight in the courts. But the Trump campaign didn’t use the money for that,” Lofgren said in her opening statement.

A senior investigative counsel to the committee, Amanda Wick, said in a video played at the end of Monday’s hearing that the committee found the “Official Election Defense Trump” to which Trump repeatedly asked people to contribute money did not, in fact, exist. The committee played excerpts of testimony from two Trump campaign officials appearing to confirm this.

Wick said the campaign sent millions of emails asking supporters to donate, sometimes as many as 25 emails per day.

“As the select committee has demonstrated, the Trump campaign knew these claims of voter fraud were false yet they continued to barrage small-dollar donors with emails,” Wick said.

When asked if it was “fair” to say the fund was another “marketing tactic,” former Trump campaign digital director Gary Colby said “yes.”

Hundreds of millions of dollars went into Save America, Trump’s political action committee formed after the 2020 election. The group has given money to Mark Meadows’s charitable foundation, the American First Policy institute, Trump hotel properties and more, according to the Jan. 6 committee.

The panel will publicly reconvene on Wednesday at 10 a.m. ET to hold its third televised hearing this month.

While the committee focused Monday on Trump’s actions on Election Day and immediately after, Cheney said the coming days would pan out to his broader planning for Jan. 6.

That will include Trump’s plan to “corrupt” the Department of Justice,” she said, as well as his conversations with attorney John Eastman “to pressure the vice president, state legislatures, state officials and others to overturn the election.”

Cheney then aired a clip teasing a conversation that Herschmann, the White House lawyer at the time, said he had with Eastman.

“I said to him, ‘Are you out of your f—— mind? I said I only want to hear two words coming out of your mouth from now on: orderly transition,” Herschmann said in the video.