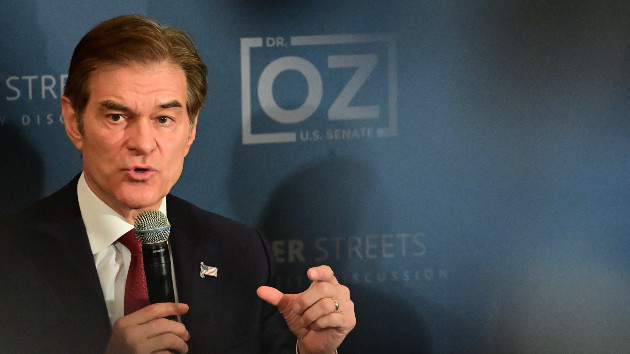 (WASHINGTON) — Dr. Mehmet Oz rarely talks about his faith on the campaign trail — but, if elected, the son of Turkish émigrés could make history as the first Muslim elected to serve in the U.S. Senate.

“Pride and honor,” Oz, the Pennsylvania GOP nominee, said in an interview last month when asked by ABC News’ Linsey Davis what being the first Muslim in the chamber would mean to him.

He is already the first Muslim ever to be nominated by a major party for a Senate seat.

“I think America, especially this commonwealth of Pennsylvania, was built on allowing people of very diverse backgrounds to offer their best ideas. All of us are smarter than any one of us,” he told Davis.

One of Oz’s most extensive discussions of Islam came in a conversation in December 2009 with Henry Louis Gates Jr. for the PBS series Faces of America.

Oz told Gates then that his father’s family put religion as their “core essence,” while his mother’s family was secular.

In that interview, Oz said he associates with Sufism, a millennia-old practice in Islam that emphasizes a direct relationship with God. Both Sunni and Shiite Muslims practice Sufism.

“It’s much more mystical, much more interested in taking away the 99% of reality that we think is there and looking at the real, important 1% that is beneath that veneer — the true connection with God,” Oz told Gates in 2009.

“Sufism is just kind of like, ‘I’m spiritual,"” Imam Abdullah Pocius, the leader of a mosque in Philadelphia, explained to ABC News. “It’s like when an American says, ‘Well I’m not really into organized religion, but I’m spiritual,’ you know?”

Pocius, who is not politically affiliated and said he has never voted, said Oz is rarely discussed among Muslims in Pennsylvania that he knows. Oz, too, rarely discusses his Muslim background on the campaign trail unless asked.

Despite his historic nomination, Oz feels distant from the Muslim community in Pennsylvania and is not “visible” in that role, Pocius said: “He definitely does not excite us. He’s not even a blip on the radar.”

As a Muslim Republican, Oz is a minority in the GOP, as only 13% of Muslims identified with or leaned toward the party, according to a 2017 survey for the Pew Research Center, which found that by contrast 66% of Muslims identified as or were leaning toward Democrats. That political divide stayed roughly stable from 2007-2017, Pew’s survey found.

The survey also showed that a third of Republican-leaning Muslims said that, nonetheless, the party was “unfriendly” toward them.

In the aftermath of the terror attacks on Sep. 11, 2001, some conservative figures “embraced bellicose rhetoric” about Muslims, the Brookings Institution noted in a 2019 report. Three days after the terror attacks, for instance, columnist Ann Coulter declared in a column that the United States should “invade their countries, kill their leaders and convert them to Christianity.”

Then-President George W. Bush, however, was quick to push back against such sentiments: “The face of terror is not the true faith of Islam. That’s not what Islam is all about. Islam is peace. These terrorists don’t represent peace. They represent evil and war,” he said roughly a week after 9/11.

In 2017, then-President Donald Trump instituted a ban on citizens from several predominantly Muslim countries entering America after suggesting repeatedly during his campaign that the government should regulate Muslims and mosques, which drew intense backlash from other quarters.

Oz, who has been endorsed by Trump in the Senate race, commented on the travel ban in a February 2017 appearance on Watch What Happens Live with Andy Cohen.

“I’ve got some family back in Turkey. It’s a challenging issue for us,” Oz said, shaking his head.

That same year, Oz told the Turkish outlet TRT World that he believed Islam was misunderstood.

“I think Islam has a huge opportunity and an obligation to explain what it’s really about. It’s too easily characterized as people blowing things up, motivated by hate, and doesn’t really reflect the religion I grew up with,” he said.

On the trail this year, Oz has called out Muslims he believes are too extreme and reiterated, like other GOP politicians, that he worries about Islamic law.

“We don’t want Sharia law in America,” he said in a May interview on Real America’s Voice, a conservative television outlet, referring to Islam’s historic legal system that has been controversial in the West — and particularly among Republicans — for its approach to criminal justice, democracy and women’s rights. (Sharia experts call that criticism reductive, saying some rules are unfairly linked to Sharia rather than social or political forces.)

“I’m a secular Muslim,” Oz told Real America’s Voice in May. “I don’t want any of these religious fanatics playing a role in American society, and I would aggressively block them.”

When asked then whether he believed America was founded “on Judeo-Christian principles derived from the Bible,” Oz replied, “Of course,” before noting that his four children and four grandchildren are all baptized and Christian.

Self-identifying as a “secular Muslim” can sometimes be used as “code” to appeal to non-Muslims, argues Hamayra Ziad, the director of the Islamic Studies program at Johns Hopkins University.

“It’s this code that actually plays into fears of Islam and of Muslim terrorism,” Ziad told ABC News, qualifying that she does not know Oz’s intentions in using the phrase. (His campaign did not respond to a request for comment for this story.)

Some in Pennsylvania’s Muslim community doubt that most Muslims are moved by Oz’s faith, despite the barrier breaking.

“I don’t think that Muslims themselves are going to be very influenced by the fact that Oz is a Muslim, although a few people may be. Some small number of people might be; it’s conceivable,” Khalid A.Y. Blankinship, a Muslim and the chair of the religion department at Temple University, told ABC News.

He added that campaign issues like the health of Oz’s Democratic rival, Lt. Gov. John Fetterman, as well as Fetterman’s platform and attacks on Oz’s longtime residency in New Jersey, likely take precedence.

However, a man who works at a mosque in Bucks County outside of Philadelphia said that while Oz’s candidacy “is not being discussed” among Muslims he knows, “There is of course a pride that’s going into it since he’s a Turkish Muslim.”

The man, who declined to give his name, citing a mosque policy against speaking to the press, said that his family members are Republican and “are happy” for Oz.

Muslims make up roughly only 1% of the state’s population as of 2014, according to data compiled by Pew.

“The Muslim vote is really tiny, and it’s not very significant,” said Blankinship.

However, that doesn’t diminish Oz’s candidacy, Blankinship said, calling it “a major event.”

“It is very significant that that has happened,” Blankinship said.