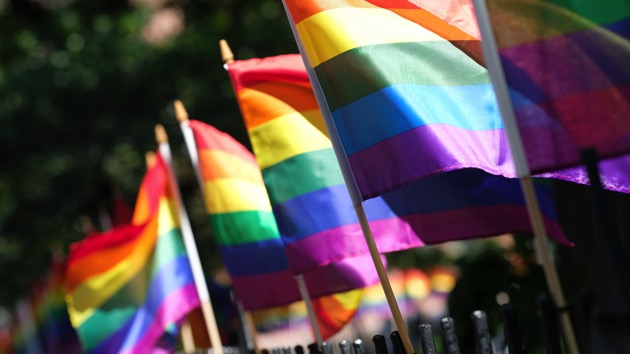 (TALLAHASSEE, Fla.) — A Florida bill that would limit classroom discussions on sexual orientation and gender identity and encourage parents to sue schools or teachers that engage in these topics is speeding through the state House and Senate.

It’s being called a “Don’t Say Gay” bill by LGBTQ advocates, who fear that if this bill is signed into law, it could act as a complete ban on the lessons on LGBTQ oppression, history and discussions about LGBTQ identities.

“This would erase LGBTQ+ history and culture from lesson plans and it sends a chilling message to LGBTQ+ young people and communities,” said Melanie Willingham-Jaggers, the executive director of the national LGBTQ youth advocacy group GLSEN.

Activists say that erasing LGBTQ presence from schools may imply to students that their gender identity or sexual orientation is something to be ashamed of or hidden.

The two bills in the state legislature, HB 1557 and SB 1834, state that a school district “may not encourage classroom discussion about sexual orientation or gender identity in primary grade levels or in a manner that is not age-appropriate or developmentally appropriate for students.”

The House Education & Employment Committee has moved the bill forward, handing it off to the Judiciary Committee.

It adds that parents who violate this rule can sue, seeking damages and reimbursement for attorney fees and court costs.

Rep. Joe Harding, who is the sponsor of the legislation, hopes it will “reinforce the fundamental right of parents to make decisions regarding upbringing & control of their children,” according to the bill’s text.

Harding did not respond to ABC News’ request for comment.

LGBTQ advocacy organizations say these bills are reminiscent of the “no promo homo” laws of the 1990s that barred educators from discussing queer topics in schools, but with an added mandate on parent and family involvement.

“These mandates are harmful and risk carelessly outing LGBTQ+ young people to families who do not affirm their children’s identities,” Willingham-Jaggers said.

2021 was a record-breaking year for anti-LGBTQ legislation, according to the Human Rights Campaign. More than 250 of these bills were introduced and at least 17 were enacted into law.

This Florida legislation follows similar bills that restrict educators from teaching about oppression in the U.S.

Wilkie said that queer issues and access to supportive resources have been the priority against anti-LGBTQ attacks in recent years, and this has been a heightened effort since the Pulse nightclub shooting in 2016.

LGBTQ youth in the state, who have a higher risk for suicidal ideation, depression and anxiety, have been struggling, but Wilkie says advocacy groups will continue to fight these bills.

“We will fight,” she said. “It’s so disheartening to think that they would not be able to freely talk about themselves, or learn anything about their history.”