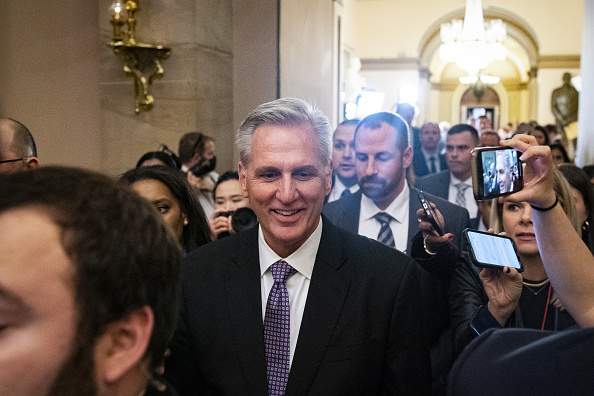 (WASHINGTON) — As Kevin McCarthy faced Day 2 of his struggle to become House speaker, he got an enthusiastic vote of confidence from Donald Trump.

The former president did more than endorse McCarthy for speaker (something he had already done months ago); he warned Republicans that failing to elect McCarthy would be a disaster for the Republican Party.

“VOTE FOR KEVIN,” Trump admonished in all-caps on his Truth Social platform Wednesday morning. “DO NOT TURN A GREAT TRUMPH INTO A GIANT & EMBARRASSING DEFEAT.”

And what happened? Not a single anti-McCarthy Republican did what Trump asked. In fact, the number of votes for McCarthy actually went down in the round of balloting after Trump’s statement, as Rep. Victoria Spartz, R-Ind., switched from voting in favor of McCarthy to voting “present.”

“I am an independent legislator,” she told reporters. “I what my people say and the people who elected me.”

Anti-McCarthy hardliner and die-hard Trump-backer Rep. Lauren Boebert of Colorado not only disregarded his warning — she called him out on the House floor.

“Let’s stop with the campaign smears and tactics to get people to turn against us, even having my favorite president call us and tell us we need to knock this off, I think it actually needs to be reversed. The president needs to tell Kevin McCarthy that, sir, you do not have the votes and it’s time to withdraw.”

Donald Trump’s inability to sway a single Republican vote says as much about Trump as it does about McCarthy.

The anti-McCarthy revolt has been led by some of the most fervently pro-Trump Republicans in the House. If Trump is powerless to influence even their votes, what power does Trump really have?

McCarthy worked hard to get Trump’s endorsement. He cultivated a close relationship with Trump while he was president and became the first Republican leader to visit Mar-a-Lago after Trump left the White House, famously posing a photo with Trump a mere three weeks after the Jan. 6 attack on the Capitol.

In a way, McCarthy’s strategy worked. Trump has consistently supported McCarthy’s bid for speaker, endorsing him even before Republicans won the majority las November.

Trump has even made calls to House Republicans urging them to vote for McCarthy. But winning Trump’s support, hasn’t helped McCarthy win the speakership.

As one close adviser to Trump told ABC News, “To be brutally frank, I’m not sure he’s moved one vote.”