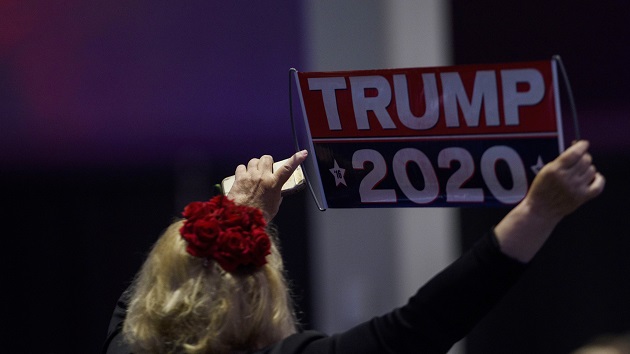 “It’s great to be back in Greenville with so many proud, North Carolina patriots who love our country, support our military, respect our police, honor our flag and always put America first, we don’t put America second,” Trump said as he opened his speech. “As we gather tonight, our country is being destroyed before our very own eyes.”

Trump’s speech in Greenville, North Carolina, was his first political appearance outside his new home state of Florida since he left office in January. In late February, he delivered the keynote address at the annual Conservative Political Action Conference in Orlando where he teased a 2024 comeback bid while promoting the false claim that the November election was “rigged” against him.

Since then, the former president has only doubled down on spreading conspiracies about the election, backing so-called “audits” in Arizona and Georgia and calling for others in the battleground states he lost.

Trump referred to “bad things” happening in the 2020 election, while saying the GOP would have a “tremendous 2022” in the midterm elections. Trump teased — slightly — a 2024 run as well.

“We’re going to win North Carolina’s all important U.S. Senate race, and we’re going to lay the groundwork for making sure that Republicans once again carry the great state of North Carolina, in a number, a year, that I very much look forward to: 2024,” he said.

Following the deadly attack on the U.S. Capitol, Facebook initially suspended Trump’s accounts indefinitely over concerns his posts were inciting violence. Twitter permanently banned Trump from using its platform on Jan. 8 “due to the risk of further incitement of violence.”

His most recent outlet, the blog section of his website where his post-presidency statements were posted, was shut down this past week after being live for barely a month.

MORE: Facebook suspension of Trump to last 2 years
Trump’s supporters gathered early in the day outside the Greenville Convention Center, some carrying “Trump 2020” flags while others were already displaying “Trump 2024: I’ll Be Back” banners. Many wore “Trump won” hats, being sold outside the arena. About 1,200 attendees were expected in the room for Trump’s speech. The NCGOP said it was the single-largest fundraiser in the group’s history.

South Dakota Gov. Kristi Noem, herself a possible 2024 GOP presidential candidate, spoke earlier in the day at the convention.

Trump’s return to the podium on Saturday also came two days after his vice president, Mike Pence, spoke at the Hillsborough County Republican Committee’s annual Lincoln-Reagan Dinner in Manchester, New Hampshire. The state holds the nation’s first primary in 2024, though Pence has yet to announce a run despite speculation after previously visiting fellow early primary state South Carolina.

Pence largely touted what he saw as the Trump administration’s successes, though he did say he diverged from the president on his feelings about the Jan. 6 riot — consistently downplayed by Trump.

“President Trump and I’ve spoken many times since we left office,” Pence told the crowd in Manchester. “And I don’t know if we’ll ever see eye to eye on that day. But I will always be proud of what we accomplished for the American people over the last four years.”