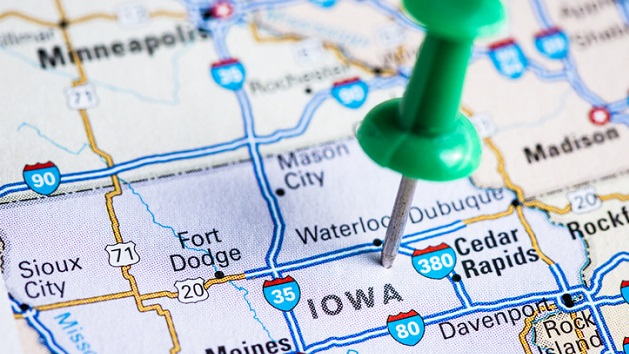 The order of the early states is highly determinative in which candidate becomes the Democratic nominee.

The proposal, co-sponsored by DNC Rules and Bylaws Committee co-Chairs Jim Roosevelt and Lorraine Miller, is billed as promoting diversity and competitiveness, building on earlier attempts to remove Iowa — which is majority white — from being first in the nominating process.

If passed, the resolution would establish a six-week application process for states that want to hold their primary elections before Super Tuesday. The Rules and Bylaws Committee could then pick up to five states for early status. Iowa, New Hampshire, South Carolina and Nevada currently lead Democrats’ presidential primary calendar as the four “early states.”

“The RBC’s goal in every presidential election cycle is to construct a nominating process that reflects the diversity of the party; gives candidates of all types the opportunity and incentive to meet voters of all types; exemplifies our passionate belief in American democracy; and ultimately produces the strongest possible Democratic nominee for president,” write Roosevelt and Miller in the draft proposal, which is expected to be discussed at a virtual meeting Monday.

Details of the draft were first reported by the Washington Post.

Michigan Rep. Debbie Dingell, a Democrat, told ABC News that she continues to believe Iowa and New Hampshire should not have “a disappropriate impact on the presidential nominating system.”

“I think [Michigan] should have a chance, but I think every state in the country should have an opportunity to be in that rotation, to have presidential candidates know what your issues are,” said Dingell. “Every region should have their opportunity to get the kind of attention New Hampshire and Iowa do.”

Any potential change to the nominating calendar would have to be finalized before the DNC’s summer meeting, which members expect will occur in August or September.

A source with knowledge of RBC meetings said the time-sensitive nature of changing the DNC’s primary calendar is one of the most promising cards Iowa has to play to keep its first spot in line.

Legacy Iowa Democrats often acknowledge the state’s lack of diversity on paper but prop up its diverse ideals. The Hawkeye state, they say, put the first Black president — Barack Obama — on the map, and then selected the first female presidential nominee, Hillary Clinton. After weekslong controversy in 2020, the state selected the country’s first openly gay presidential candidate, Pete Buttigieg.

“We’re the only state that didn’t select an old white guy in their primaries, and we’re being knocked for not being diverse enough,” said Bret Nilles, five-term Linn County Democratic Party chair.

Iowa Democrats’ 2020 general election losses across key suburban districts — most of which flipped blue two years into Donald Trump’s presidency, in 2018 — signified a significant reversal in the usually purple state.

Still, Iowa’s representative to the Rules and Bylaws Committee, Scott Brennan, told ABC News that Iowa will continue to fight for its place.

“The four early state process, it’s been very successful in electing Democratic presidents, even in some challenging times,” Brennan said. “I don’t have any concern about us putting together a vigorous defense of Iowa.”

“We offer the diversity end of talking to rural folks, one in five Americans live in a rural area,” he added. “So if Democrats can’t talk to rural folks, then, you know, we’ve got 20% of the American voting electorate that is often overlooked.”

The Iowa Democratic Party did not return a request for comment and referred ABC News to a statement it released after the DNC’s spring meeting earlier this month, in which party Chair Ross Wilburn said he will “always fight for Iowa to remain first.”