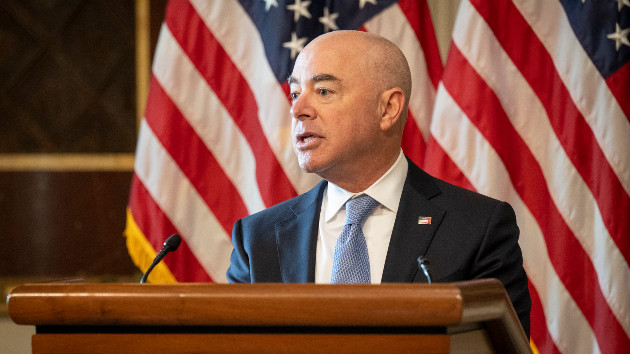 (WASHINGTON) — The Department of Homeland Security took steps on Wednesday to codify the Obama-era Deferred Action for Childhood Arrivals program into regulatory policy — even as a court case threatens to upend the ability of migrants who were brought illegally into the U.S. as young children to remain in the country.

Since President Barack Obama launched the policy in 2012, the DHS estimates that more than 825,000 immigrants have been enrolled in DACA, which temporarily protects them from deportation and allows them to obtain work authorization.

The DHS’ final rule, issued Wednesday after being subject to public comment, is a technical move that seeks to absorb DACA under administrative law rather than through presidential discretion.

The rule largely preserves the eligibility criteria outlined in a 2012 memo by then-Homeland Security Secretary Janet Napolitano, including the requirement that applicants must have arrived in the U.S. before the age of 16 and must have continuously resided in the country for at least five years before June 15, 2012.

“We are taking another step to do everything in our power to preserve and fortify DACA, an extraordinary program that has transformed the lives of so many Dreamers,” Homeland Security Secretary Alejandro Mayorkas said in a statement on Wednesday.

“Thanks to DACA, we have been enriched by young people who contribute so much to our communities and our country. Yet, we need Congress to pass legislation that provides an enduring solution for the young Dreamers who have known no country other than the United States as their own,” Mayorkas said, referring to the people in the program by a common nickname.

Since its inception, DACA has faced multiple legal challenges from those who say Obama overreached his authority. An ongoing case in the U.S. Fifth Circuit Court of Appeals seeks to have the court rule the program unlawful and end it. A decision there may come any day.

Despite Wednesday’s regulatory filing by DHS, DACA remains closed to new applicants as a result of a July 2021 decision from a federal court in Texas. Only those who already have DACA status can apply to renew it under the new framework, according to DHS.

The department’s final rule would not go into effect until Oct. 31 and it was unclear how Wednesday’s move would impact any current litigation.

“President [Joe] Biden campaigned on strengthening and fortifying DACA. This final DACA rule fails to strengthen the program by not expanding it to include the majority of undocumented immigrant youth who are graduating from high school this year and not eligible for the program because of arbitrary cut-off dates,” Juliana Macedo do Nascimento, deputy director of federal advocacy for the group United We Dream, said in a statement, in part.

“This rule does not bring us any closer to seeing true protection for DACA recipients and immigrant youth,” Macedo do Nascimento said.

The DHS rule will preserve the original process for applying for a renewal of deferred action — shielding young migrants from deportation — and a work permit despite the department suggesting in an earlier proposal that it would have potential applicants apply for a permit and for deportation protection separately.

Immigration advocates had warned that decoupling the two benefits would leave people susceptible to losing work authorization while maintaining deferred deportation if a future administration wished to make DACA recipients ineligible to work.

DHS estimates that as of 2020, DACA recipients and their households pay around $5.6 billion in annual federal taxes and $3.1 billion in annual state and local taxes. Many people in the program have gone on to acquire professional certificates, advanced school degrees and about 56,000 have become homeowners, DHS said.

After the final rule was published, Biden issued a statement on Wednesday reaffirming his support for the “Dreamers,” whom he said were “part of the fabric of this nation.”

“They serve on the frontlines of the pandemic response. They are students, entrepreneurs, and small business owners. Many serve bravely in our military. They’ve only ever known America as their home,” Biden said.

Although the president made no mention of the ongoing legal challenges to DACA, he called on Republicans to support a pathway to citizenship — a politically fraught process that has divided the GOP and repeatedly failed, over the years, to result in federal legislation.

“It is not only the right thing to do,” Biden argued of congressional action, “it is also the smart thing to do for our economy and our communities.”