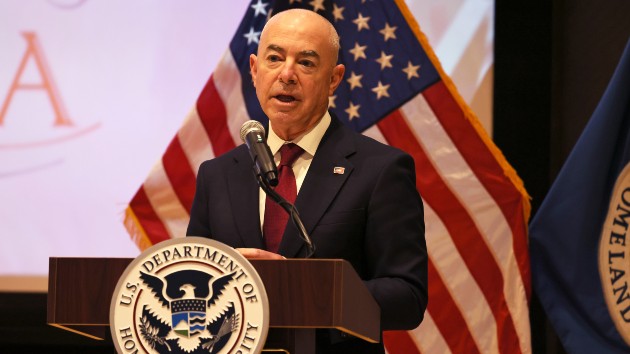 “The threat is real. The threat is upon us. The risk is to all of us,” Mayorkas said at the U.S. Chamber of Commerce’s Now & Then Speaker series Wednesday. “Inform oneself. Educate oneself and defend oneself.”

A ransomware attack is when hackers lock files on a device and demand a ransom be paid in order to unlock them, according to the Department of Homeland Security’s Cybersecurity and Infrastructure Security Agency.

Mayorkas said that $350 million was paid out for ransomware attacks in 2020.

Most recently, there was a ransomware attack against the Metropolitan Police Department in Washington, D.C., with a group demanding money for stolen files. The MPD has not provided an update as to what happened.

And the Illinois Attorney General’s Office has been under attack since at least April 10, ABC News affiliate WLS-TV reported on Tuesday. The attorneys in the office are having to use their personal emails — underscoring the threat that these attacks pose.

Mayorkas also stressed Wednesday that ransomware attacks against small businesses have been successful.

“As a matter of fact, small businesses comprise approximately one-half to three-quarters of the victims of ransomware,” he said.

Overall, ransomware attacks have been up almost 300% in the past year, he said.

“The losses from ransomware are staggering and the pace at which those losses are being realized are equally staggering,” he added.

Mayorkas announced an effort to speed up DHS’ awareness on cyber — one of four so-called “sprints” — that will focus on hiring people with the right experience to work at the department.

A DHS spokesperson told ABC News that the department intends to hire 200 cyber personnel by July.

Mayorkas also said Wednesday that resources from Homeland Security and the Secret Service are available for businesses to take advantage of in an effort to combat and respond to ransomware attacks.