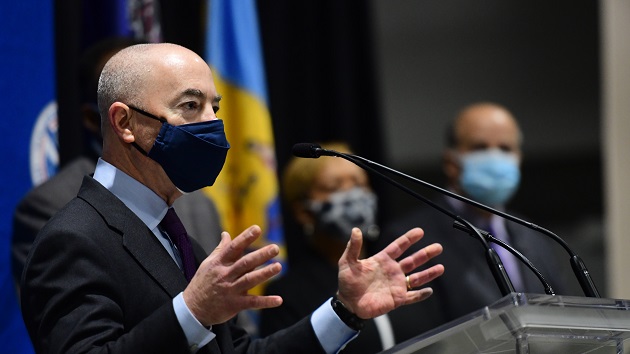 (WASHINGTON) — As the world has seen images of migrant children being dropped over the border or left for dead, the Department of Homeland Security on Tuesday announced an effort to prevent transnational crime organizations from smuggling migrants across the border.

DHS said “Operation Sentinel” will be focused not only on cutting off transnational crime organizations funding, but on the actual operations of smuggling.

“We know all too well that these organizations put profit over human life with devastating consequences,” DHS Secretary Alejandro Mayorkas told reporters on a conference call. “With the help of our federal and foreign partners, we aim to cut off access to that profit by denying these criminal organizations, the ability to engage in travel trade and finance in the United States. We intend to disrupt every facet of the logistical network that these organizations use to succeed,” he said. “Operation Sentinel will focus on disrupting the transnational criminal organizations that smuggle migrants into the United States.”

Customs and Border Protection will be leading the operation, and acting CBP Commissioner Troy Miller said that criminal organizations put “profit over life.”

“Transnational criminal organizations routinely attempt to smuggle people in groups, but often end up abandoning the women and children, when they can’t keep up with the group these migrants are abandoned, and remote and dangerous areas, and usually left without food or water,” Miller explained.

Mayorkas told ABC News that foreign countries involved in the operation are an “integral part of the operations.”

When asked about the challenge convicting members of transnational organizations without the help of migrants testifying against them in court, Mayorkas said there are tools available to address the witnesses and victims of the illegal activity.