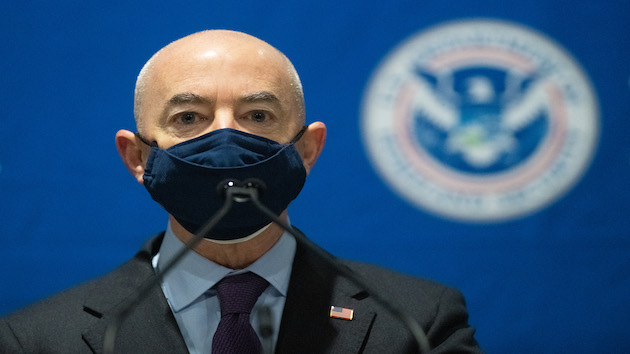 (WASHINGTON) —Secretary of Homeland Security Alejandro Mayorkas placed the blame for the current influx of migrants on the southern border at the feet of the prior administration in an interview with Martha Raddatz on ABC News’ “This Week.”

“It is especially challenging and difficult now, because the entire system under United States law that has been in place throughout administrations of both parties was dismantled in its entirety by the Trump administration,” Mayorkas told Raddatz Sunday morning. “So we are rebuilding the system as we address the needs of vulnerable children who arrive at our borders.”

Just weeks prior to Sunday’s interview, Mayorkas said during a press briefing on March 1 that the message to migrants wasn’t to come, but not to come yet. The secretary’s rhetoric has seemed to toughen since then.

Mayorkas reiterated that the border is not open and that migrants should not come to the southern border — especially in the midst of the pandemic.

“Now is not the time to come,” Mayorkas stressed. “Do not come. This journey is dangerous. We are building safe, orderly and humane ways to address the needs of vulnerable children, do not come.”

The secretary also said that they were using “Title 42” to send back migrants across the border due to the pandemic — keeping this existing Trump administration policy has drawn criticism from immigration advocates.

Mayorkas said it takes time to get a system in place to overhaul what he calls a “dismantled” immigration system.

During the administration transition, some Customs and Border officials said they raised the alarm about a potential crisis at the border, the Washington Post reported.

Responding to a question from Raddatz about a tweet from Democratic Sen. Chris Murphy, who said he was holding back tears after seeing a terrified 13-year-old girl sobbing uncontrollably to a translator while he visited the border this week with Mayorkas, the secretary said: “We all know what happened to that 13-year-old girl in the prior administration, she was turned away and turned into the desert of Mexico, or sent back to the very country for which she fled by reason of fear of persecution, we are addressing the needs of that child,” he explained. “Now, when I say it takes time, I mean it, because we’re dealing with a dismantled system.”

Raddatz pressed Mayorkas on why the Department of Homeland Security has not let in members of the media to see U.S. Customs and Border Protection facilities along the southern border.

“We’re talking about a crowded border patrol station where we are focused on operations at the same time and let me assure you that we are working on a plan to provide access so that people can see what is going on in a border patrol station,” he said, adding that they should also look at an HHS facility.

“We have a plan and we’re executing. We will succeed. It takes time,” he said.

Additionally, two sources familiar with the data confirmed that more than 600 have been in custody for more than 10 days.

The document also shows that, on average, HHS is taking in far more migrant children than it can match with sponsors and family members.

“We have dispatched FEMA, the Federal Emergency Management Administration, to assist HHS in building additional capacity to address the needs of children and to move those children through to their sponsors in the United States to shelter them in a way that they deserve and that their needs require,” McCaul said.

The HHS Office of Refugee Resettlement will open a new influx shelter in Pecos, Texas, which will operate similarly to the facility at Carrizo Springs. Unlike the Midland, Texas, site or the Dallas convention center, this new facility announced by the Office of Refugee Resettlement on Saturday will offer long-term care for migrant children before they are matched with sponsors.

Raddatz also pressed the secretary on last week’s Atlanta-area shooting which seemed to target Asian American women, and what was being done in response.

Mayorakas said the agency is “very focused on the increase in hate crimes targeting the Asian American, Pacific Islander community and many other groups,” as well as on domestic violence extremism.

“We are focused on gathering intelligence and information and sharing it in actionable form with our state, local, tribal and territorial partners. We are working with the office of Civil Rights and Civil Liberties in addressing the challenges with the social media companies to ensure that we stop the violence that is born of ideologies of hate, and we are engaging with the community,” Mayorkas told Raddatz.

“And let me also echo the very powerful words of the president — words do matter,” he added in seeming reference to the often inflammatory comments made by former President Trump in regard to the coronavirus and what many viewed as racist speech about the Asian community.