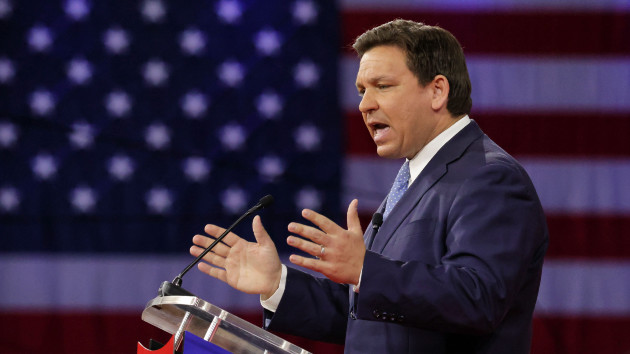 (TALLAHASSE, Fla.) — Florida Gov. Ron DeSantis is on the brink of notching several wins as the Florida legislature convened for a special session Tuesday to finalize the state’s redistricting process.

Not only is his controversial redistricting plan that heavily benefits Republicans likely to pass, but he also has a chance to target a company he is having a political dispute with — Walt Disney World.

The process to redraw Florida’s 28 congressional districts has proven contentious. After submitting his own redistricting proposal and then ultimately vetoing the map passed by both chambers of the Florida legislature earlier this spring, DeSantis called a special session to consider a new map put forward by his advisers. It slashes the number of Black districts in half from four to two and eliminates Florida’s 5th District, which stretches in North Florida from Tallahassee to Jacksonville and is represented in Congress by a Black Democrat — Rep. Al Lawson.

DeSantis has claimed such districts, and Lawson’s in particular, have been “racially gerrymandered,” and he has vowed that any map supported by his office would be “race-neutral.”

During a press conference last week, DeSantis justified the elimination of Florida’s 5th District while noting the map, if passed, would likely face some sort of legal challenge.

“We are not going to have a 200-mile gerrymander that divvies up people based on the color of their skin. That is wrong,” DeSantis said. “That is not the way we’ve governed in the state of Florida and so that will be that. And obviously, that will be litigated.”

DeSantis’ proposed map also splits up Black voters around the Orlando area and proposes the creation of 18 Republican-leaning and eight Democrat-leaning seats, which, if passed, would effectively eliminate Democrats’ national redistricting advantage and threaten their slim majority in the House of Representatives.

Lawmakers could vote on the proposal as early as Tuesday afternoon, which would mean it could pass both chambers by Wednesday, leaving little time for opposition. Legislators, however, have all week to remain in special session if they wish.

Black lawmakers and voting rights activists across the state say the latest map tramples on the rights of Black voters.

Lawson, one of the Black legislators likely to lose his seat in DeSantis’ preferred configuration, called the governor’s plan “a continued scheme by DeSantis to erase minority access districts in Congress in order to create more seats for the Republican party.”

“DeSantis is doing a disservice to Florida voters by playing partisan politics. This latest map clearly violates the Voting Rights Act as well as the U.S. and Florida Constitutions,” Lawson added in a statement.

“These maps are not what Florida looks like. He has taken away 50% of Black representation.”

Members of major voting rights and Black advocacy groups, including the NAACP, joined​​ hundreds of protestors, including members of the state legislature, outside the Florida State Capitol on Tuesday morning to slam DeSantis and his party for “actively working to strip Floridians’ freedoms through deliberate and uncalled for attacks on Black voters’ representation in government.”

Adding to the controversy surrounding the governor is the additional item DeSantis put forward for consideration hours before the special session was set to begin. That measure would put an end to special administrative districts implemented before 1968, including the Reedy Creek Improvement District, otherwise known as the governing and special tax district for one of DeSantis’ most high-profile targets: Walt Disney World.

DeSantis has previously signaled support for legislation that would eliminate Disney’s district.

“I was shocked to see some of the stuff that’s in there,” said DeSantis during a press conference earlier this Spring. “They can do their own nuclear power plant. Is there any other private company in the state that can just build a nuclear power plant? They’re able to do certain things that nobody else is able to do.”

“Florida’s HB 1557, also known as the ‘Don’t Say Gay’ bill, should never have passed and should never have been signed into law. Our goal as a company is for this law to be repealed by the legislature or struck down in the courts, and we remain committed to supporting the national and state organizations working to achieve that. We are dedicated to standing up for the rights and safety of LGBTQ+ members of the Disney family, as well as the LGBTQ+ community in Florida and across the country,” said a Disney spokesperson at the time.