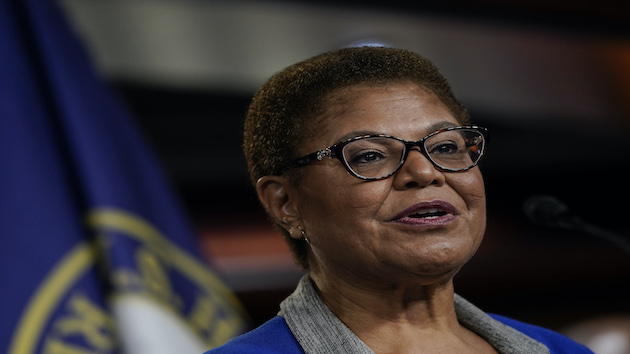 (WASHINGTON) — Former police officer Derek Chauvin deserves a “maximum sentence,” Rep. Karen Bass, D-Calif., said Sunday on ABC’s “This Week” after he was convicted in the murder of George Floyd.

“When we have seen the occasional guilty verdict, it is rare followed by the maximum sentence. And considering the egregious nature of the torturing, the death of George Floyd a maximum sentence, I think, is absolutely needed,” she told “This Week” Anchor George Stephanopoulos.

Following Chauvin’s conviction Tuesday, many politicians and activists continue to call for federal legislation to address police brutality in the wake of several recent shootings of unarmed people of color.

The George Floyd Justice in Policing Act — introduced by Bass to combat police misconduct – passed the House in a party-line vote in March but has yet to be voted on in the Senate.

The California congresswoman said bipartisan talks on police reform were ongoing on Capitol Hill, telling Stephanopoulos, “We’ve been having information conversations with one of the caucuses in the House called The Problem Solvers, which is a bipartisan caucus, along with Senators Scott and Sen. Booker. And so I believe that we can get these. I absolutely do. What’s most important is that we come up with ways to hold police officers accountable so we will stop seeing these videos. So ending qualified immunity, decreasing the standard that is needed to prosecute an officer.”

Stephanopoulos pressed Bass, however, highlighting that many Republicans see the issue of qualified immunity as an obstacle to a bipartisan bill.

“Sen. Tim Scott, who is leading the Republican side on the negotiations, says lowering that standard for prosecutions is not on the table,” he told Bass.

“Oftentimes, people say there are red lines (that they) won’t cross… and then in negotiation we find a pathway forward. And I’m hoping that we will be able to do that,” the congresswoman said.

“But it’s also about raising the standard of policing in the United States. We have 18,000 police departments and no national standards, which is why you see some practices legal in some areas and illegal in other areas,” she added.

However, some civil rights groups, like the Movement for Black Lives, have opposed the Bass-sponsored George Floyd Justice in Policing Act, arguing it invests too much in policing and not enough in marginalized communities.

When asked to respond to such criticisms by Stephanopoulos, Bass said she agreed that Congress needed to spend more on communities.

“What we have done over the years is we have divested from communities. We’ve cut health care. We’ve cut social services. And then when there are problems that result, we expect the police to pick up the pieces,” she said.

“We need to look at communities as a whole. And one of the things that the bill does is provide resources to communities to re-envision public safety. What do communities need in order to be safe. So I think much is needed to be done. I think the George Floyd Justice and Policing Act moves us a step forward after it’s passed,” Bass added.

NY Republicans call on Rep. George Santos to resign over his ‘deceit’